Best Evidence Yet For Water Plumes Erupting Off Europa 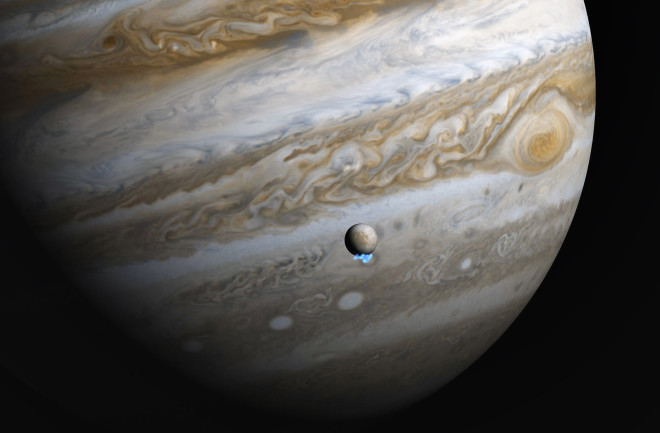 Hubble also saw water vapor erupting from Europa, shown here in an artist illustration with real images but enhanced ejecta. (Credit: NASA/ESA/and M. Kornmesser) Score another point for Jupiter’s moon Europa as a top target in the hunt for alien life. In a study published Monday in the journal Nature Astronomy, scientists say they’ve found the best evidence yet that plumes of water erupt from an ocean hidden beneath the moon’s icy shell. The Hubble Space Telescope had found signs of similar activity several times, but there was initially some debate surrounding those results. Astronomers made this latest breakthrough by digging through decades-old data collected by NASA’s Galileo spacecraft — the last mission to visit Europa. And the results strengthen the case for finally sending a spacecraft to return to Europa and fly through these water plumes, sampling what’s inside them in search of insights into the chances of life below the ice. Incredibly, most of what astronomers know about Europa comes from a limited set of data gathered by the troubled Galileo probe, which launched in 1989. Problems with the spacecraft’s antennae limited how much information could be sent back to Earth. So, the best ever image of Europa’s surface packs some 20 feet into each pixel — and it’s not even in color.

Europa’s fractured crust shows clear signs of a young surface — one that’s perhaps still actively shifting. This high-resolution mosaic of the Conamara Chaos region is one of the few such close-ups gathered by Galileo in the 1990s. (Credit: NASA/JPL/Orion Moon) Nonetheless, Galileo’s dozen close flybys of Europa revealed a fractured and icy terrain that looked like a frozen version of Earth’s plate tectonics. And Galileo’s magnetometer also showed evidence for a global ocean. But that data has had to hold astronomers over for more than two decades, as no spacecraft has been back since. A dozen spacecraft have launched for Mars in that time. In fact, many scientists now working on NASA’s planned Europa Clipper mission — due to launch in the 2020s — studied old Galileo data as graduate students. The latest findings were made by observing changes in Europa’s magnetic field and plasma that the scientists say were likely caused by a plume. They retraced Galileo’s path at the time the observations were made to show the anomaly came from a region where scientists already thought heat was coming up from the moon’s interior. These new findings also make the case for sending a lander to touch down on Europa and drill through its icy surface. That’s something some members of Congress have pushed for, but the space agency itself has previously resisted due to technical challenges and high cost.