At about 50,000 times the mass of the sun, this intermediate-mass black hole skirts the line between shrimp and giant. 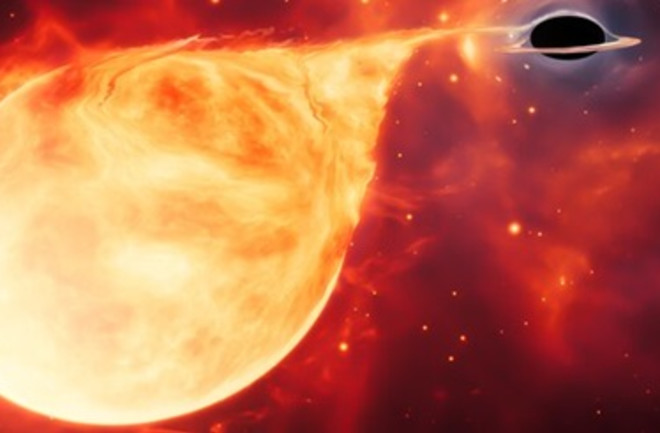 Intermediate-mass black holes, like the one depicted tearing apart a star in this artist’s concept, have long been theorized to exist. But finding conclusive proof has proven extremely difficult. But new research, based on the X-ray signals seen from a suspected midsized black hole shredding a star, provide the best evidence yet. (Credit: ESA/Hubble, M. Kornmesser)

While “seeing” black holes technically isn’t possible, astronomers are fairly certain they exist both in small and super-sized varieties. Medium versions, however, called intermediate-mass black holes (IMBHs), have remained surprisingly elusive. Because astronomers think they’re missing an important link between the smallest and largest black holes, confirming that IMBHs exist would have powerful implications for the evolution of these light-gobbling beasts.

Now, astronomers, including Dacheng Lin from the University of New Hampshire, are circling back to a possible IMBH they reported on in 2018. Armed with new observations, the researchers think their candidate IMBH looks more like a mid-sized black hole than anything found before, weighing in at some 50,000 times the mass of the sun. If confirmed, the IMBH candidate might serve as evidence that supermassive black holes slowly build up over time through multiple mergers of smaller black holes.

Wielding the awkward name of 3XMM J215022.4-055108, the proposed midsized black hole first stood out to astronomers in 2006 when they spotted a bright flash of high-energy X-rays — the kind of thing you might expect to see when a black hole devours a star, which is called a tidal disruption event (TDE).

Black holes are not particularly fussy eaters, but they do tend to take their time. This meant that astronomers could trace the evolution of the X-ray glow from the suspected TDE for more than a decade. Then, in 2018, they used the Hubble Space Telescope and the European Space Agency’s XMM-Newton satellite to gather more details on the supposed black hole.

The Hubble Space Telescope captured this image of the suspected intermediate-mass black hole 3XMM J215022.4-055108 (circled). The black hole seems to be located in a dense star cluster some 800 million light-years away. (Credit: NASA, ESA, and D. Lin (University of New Hampshire)

Intermediate-mass black holes are a curious example of a type of astronomical object astronomers believe exists but haven’t managed to prove yet. There’s plenty of evidence for stellar-mass black holes, the kind that massive stars create when they explode at the end of their lives. And there’s also lots of proof for supermassive black holes, including last year’s Event Horizon Telescope image of the shadow of the giant black hole at the center of the galaxy M87.

Though the exact definitions for different types of black holes depend on who you ask, stellar-mass black holes range from just a few to 100 times the mass of the sun, and they are largely scattered throughout galaxies. Meanwhile, their supermassive brethren range from millions to billions of solar masses and lurk in the centers of most — if not all — large galaxies.

But how do star-sized black holes beef up into supermassive ones? Astronomers think stellar-mass black holes grow by consuming anything that’s nearby — like stars, planets, nebulae, and spaceships (OK, maybe not spaceships). By gorging on what they can, these small black holes eventually reach a new weight class and become intermediate-mass black holes, which range from about 100 to 1 million solar masses. The problem with pinpointing these midsized black holes, however, is that they have already gobbled everything in their local neighborhood, yet they remain too small to source their meals from the larger galactic environment.

In other words, they suffer from classic middle child syndrome. They’re quiet, well-behaved, and therefore invisible — at least most of the time.

Very rarely, though, a star may stray too close to an intermediate-mass black hole, where the unimaginably strong pull of the black hole’s gravity shreds the star. As the stellar material circles the black hole like water whirling around a drain, it violently grinds together, causing the black hole’s surrounding accretion disk to sporadically light up. These cosmically brief blips are the primary way astronomers hunt midsized black holes, and it’s exactly what these researchers think they’ve seen with 3XMM J215022.4-055108.

To verify their suspected IMBH is really a black hole, however, astronomers first had to make sure that the X-rays weren’t emitted by something else, like a neutron star in the Milky Way. But based on the Hubble and XMM-Newton observations, the researchers are fairly certain their target resides in a star cluster on the outskirts of a galaxy located some 800 million light-years away. Additional X-ray observations also support the theory that astronomers spotted a black hole tearing a star apart, as the data match models of how such a signal is expected to fade over time. And as an added bonus, according to the researchers, the star cluster where the IMBH lives actually might be the remains of a dwarf galaxy once torn apart by the gravity of another, larger galaxy. But such is life in the cosmos.

The search for intermediate-mass black holes has been a difficult one. Lin and his team had to hunt through years of observations from the XMM-Newton telescope to find the buried signal of a TDE. And even with their follow-up work, they still consider their target only an IMBH candidate, not definitive proof that midsized black holes exist. It’s still possible something else is causing the bright burst of X-rays. But 3XMM J215022.4-055108 is one of the most convincing candidates yet discovered. And that means the hunt will press on.

“Studying the origin and evolution of the intermediate-mass black holes will finally give an answer as to how the supermassive black holes that we find in the centers of massive galaxies came to exist,” Natalie Webb, a member of the research team from the Université de Toulouse in France, said in a statement.

The mystery of how black holes, one of the most extreme objects in the universe, grow from puny star-sized objects into galaxy-dominating behemoths is far from solved. But if these results are confirmed, astronomers have at least discovered an important piece of the puzzle.