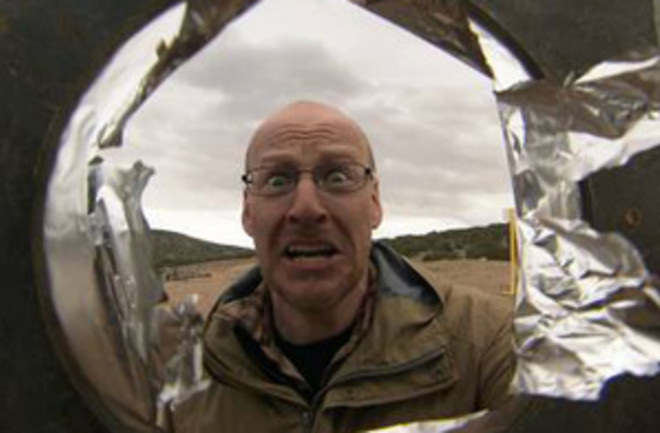 In case you haven't heard -- and c'mon, do you live in some underground cavern with Morlocks and C.H.U.D.S.? -- my new TV show "Phil Plait's Bad Universe" premieres this Sunday night August 29, at 10:00 p.m. on the Discovery Channel (check your local listings; for me it's on at 8:00). This first episode is about saving the world from asteroid impacts. In most science TV shows on this topic they're heavy on the death and destruction, but pretty light on what we can actually do about them. But if you've read my book Death from the Skies! you know I'm all about getting off our collective butts and doing something. So in "Bad Universe" we go step-by-step, looking into what can be done to keep an impact from ruining our whole day. Wanna see a clip? Thanks to Discovery Channel, here's a sneak peek!

[For a longer teaser of the show, go here.]

Did my stunt double survive? How much destruction did we wreak on the New Mexico desert? And what the frak can we do if we see some nickel-iron bucket o' death headed our way? Well, you'll just have to watch the show and see, won't you? And if you think filming this show was fun... it was. And there's lots more. Tune in and find out! Oh, and before you go: tomorrow I'll have another Twitter contest announcement, where I'm giving away lots of cool stuff connected with the show. Stay tuned!

For those who are curious: the picture at the top is me looking through what's called a Bikini Gauge, named after the nuclear bomb tests in the 1950s (and not the swimsuit, though the latter does provide a lot of fodder for jokes if, like me, you have the sense of humor of a 15-year-old). The gauge measures how much pressure the shock wave from an explosion generates... and we had lots of them for the test. I won't give away the results, but the measurements we got were not reassuring.