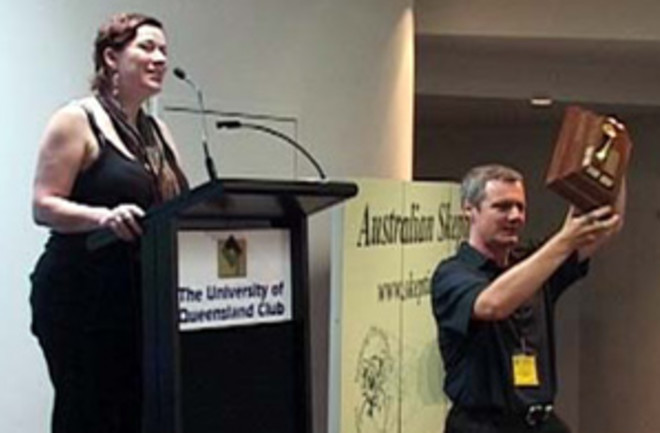 Meryl Dorey -- the truth-impaired mouthpiece of the Australian Vaccination Network, a group of antivaccination conspiracy-mongers who couldn't find reality with both hands, a compass, and detailed instructions -- was "honored" by the Australian Skeptics this week. Richard Saunders and Rachel Dunlop (pictured), on behalf of the AS, gave Dorey their annual Bent Spoon award, awarded to "the perpetrator of the most preposterous piece of paranormal or pseudo-scientific piffle". Dorey certainly fits that bill! She hasn't met a conspiracy theory she hasn't loved, or couldn't use to threaten the public health with:

Meryl appeared on national television telling a reporter that “we didn’t die from (these diseases) thirty years ago and we’re not going to die from them now”, juxtaposted alongside footage of babies gasping for breath as the journalist detailed the story of the death of Dana McCaffery from the vaccine preventable disease, whooping cough.

Dorey is also an HIV denier, and, as you can see from reading those links, doing her damndest to threaten public health. It's a shame someone like that has any voice at all in the media, as she spreads misinformation that can lead to the deaths of many people, and we know for a fact that the drop in herd immunity in areas where the AVN is loudest has resulted in deaths from preventable diseases. The Skeptic Lawyer has more to say about her as well. Dorey is going on the offensive, issuing a press release, going on radio, and being interviewed in papers saying how she's proud to get this award, since skeptics are obviously just dogmatic shills for Big Pharma, etc. And while she says this, people -- including babies -- sicken and some die due to vaccine-preventable illnesses. Nice work, Dorey. I'm so glad you're proud of the damage you've done.