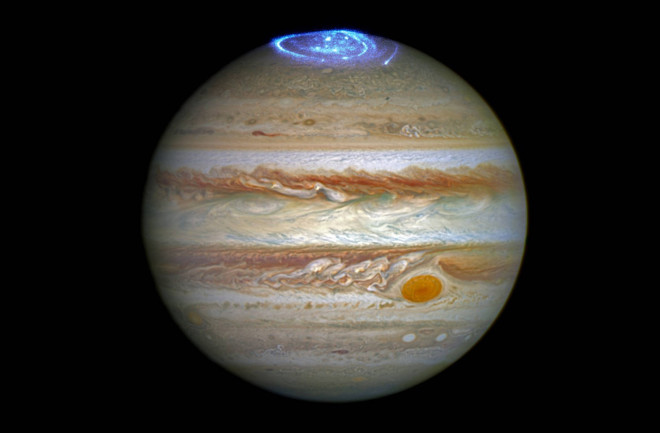 The majestic Northern and Southern Lights have mystified humans for millennia. During the long, dark nights of winter — when the space weather is right — green and purple clouds can blanket polar skies from horizon to horizon. The glowing lights dance and move in curtains and arcs, building up to a crescendo of color before they disappear.

Earth’s aurorae aren’t alone in our solar system either. Telescope observations and visiting spacecraft have found evidence for aurorae on Saturn, Jupiter, Mars, Venus — and even exoplanets. And with a recent discovery about Jupiter’s mysterious “dawn aurora” released in the journal AGU Advances, astronomers continue to unravel the mysteries of these lights across our solar system.

Aurorae on Earth are created as our planet is bombarded by particles from the Sun, chiefly electrons and protons. Those particles stream down Earth’s magnetic field lines, where they collide with nitrogen and oxygen and excite the molecules until they glow. The basic mechanisms aren’t too different from a simple neon light.

And yet, the aurora borealis and aurora australis continue to confound astronomers’ attempts to predict them and explain their many nuances. For example, just recently, a group of citizen scientists discovered an entirely new kind of aurora, which they dubbed “Steve.” And some researchers are now even trying to find out if aurorae can make sounds — an idea that pops up regularly in folklore but has been generally dismissed by science.

Increasingly, astronomers are also finding out that our planet isn’t the only one with aurorae. Yet, not all of them work quite the same way as Earth’s.

Venus doesn't have a significant magnetic field, yet its close proximity to the Sun means that the planet gets hit with solar storms so strong they cause a kind of aurorae. (Credit: ESA/C. Carreau)

Venus completely lacks a magnetic field. So, If Earth’s aurorae are caused by interactions with our planet’s magnetic field, then surely Venus shouldn’t have northern lights at all. Right?

And yet, for forty years, astronomers have puzzled over strange green signals seen in images of the planet.

Scientists moved closer to solving the mystery in 2014. A team of researchers using a telescope in New Mexico watched as Venus was repeatedly struck by solar storms. Each time, signals of the green excited oxygen appeared.

That evidence, combined with observations collected by the European Space Agency’s Venus Express spacecraft, suggest that the Sun’s own magnetic field may carry all the way out to the planet on the solar wind. That process is enough to create aurorae.

Like Venus, Mars also has aurorae despite its extremely weak magnetic field. And Mars’ aurorae are made even more incredible because the Red Planet orbits twice as far from the Sun as Venus.

Nearly two decades ago, ESA’s Mars Express spacecraft picked up a surprising glow in the planet’s upper atmosphere. It turns out, Mars’ aurorae are like nothing else seen in the solar system.

While the Red Planet lost its magnetic field long ago, spacecraft observations show magnetic anomalies still linger today scattered across the planet’s crust. And those regions correspond with areas where Mars’ remnant magnetic field is strongest. So, as charged solar particles hit the planet, they interact with this patchwork of magnetism and produce faint, scattered aurorae.

Of all of them, Jupiter is home to the most spectacular light show in the solar system, as the Hubble Space Telescope has shown us in exquisite detail. Its aurorae are absolutely massive in size thanks to a magnetosphere some 20,000 times stronger than Earth's.

They also never stop. While Earth’s aurorae get their spark solely from the Sun, Jupiter also gets hit with a steady dose of charged particles from its volcano moon, Io.

Hubble watched the aurorae over an extended and especially active period back in 2016 that happened to coincide with the Juno orbiter’s arrival at Jupiter. As Hubble watched the planet, the arriving probe measured the solar wind. Together, the spacecraft brought new insights about how Jupiter’s aurorae respond to charged particles from the Sun.

A new study released in March 2021 brought additional insights. Before the Juno probe arrived, astronomers could only watch aurorae on the daytime side of Jupiter. And as the spacecraft watched Jupiter’s nighttime side, it spotted the emergence of extremely bright aurorae called “dawn storms.” These storms produce hundreds of times more energy than a nuclear reactor does on Earth. And for the first time, this new study tracked storms from their origins on the nighttime side of the planet through their entire evolution to the daytime side.

It turns out, they form much like a kind of aurorae on Earth called auroral substorms. Here, they’re caused by sudden and “explosive” reconfigurations of our planet’s magnetosphere as the solar wind varies. But on Jupiter, the process is likely tied to changes in the plasma streaming off Io.

Aurora on a Rogue Planet

In 2018, astronomers discovered a huge gas giant planet some 20 light-years away dubbed SIMP j01365663+0933473. With a mass 13 times greater than Jupiter, it roams our galaxy without a home star, making it a so-called “rogue planet.” These worlds either formed without stars or were flung from their solar systems.

SIMP j01365663+0933473 also seems to have a magnetic field millions of times stronger than Earth’s with aurorae that may put our northern lights to shame. According to a 2018 study in The Astrophysical Journal, its aurorae happen via an entirely different process than anything in our solar system.

Without a star to bombard it with charged particles, SIMP j01365663+0933473 must have another source. That could mean this rogue planet isn’t wandering the galaxy completely alone. Like Jupiter and Io, it may have a volcanically active moon feeding it charged particles. Or, alternatively, like so many different aurorae mechanisms astronomers have discovered over the years, SIMP j01365663+0933473 may also hold some surprises.