Atomic Clocks So Accurate They Can Measure Gravity 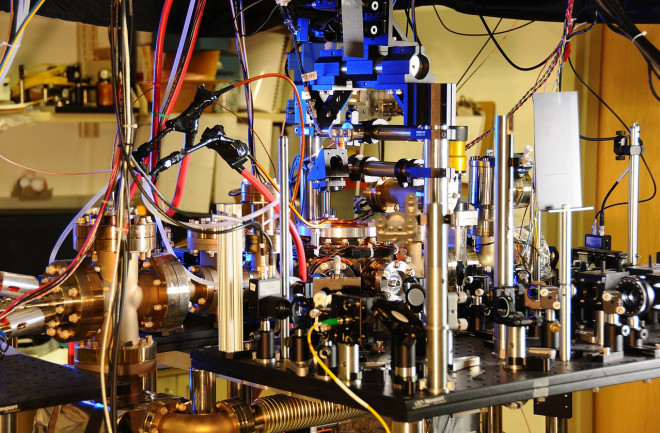 An older version of an ultra-stable ytterbium lattice atomic clock at NIST. Ytterbium atoms are generated in an oven (large metal cylinder on the left) and sent to a vacuum chamber in the center of the photo to be manipulated and probed by lasers. Laser light is transported to the clock by five fibers (such as the yellow fiber in the lower center of the photo). (Credit: Burrus/NIST)

Time, like money, only seems important when it’s running out. But to physicists, time is always a big deal. Relativity tells us that the flow of time depends on the circumstances you’re measuring it in: Clocks tick faster on top of mountains than at ground level, for example, and the faster you go the slower your clocks go. Time depends on space.

But now, thanks to technological advancements in atomic clocks — the most accurate time-keeping devices we’ve devised — we can turn things around, and determine physical parameters more accurately by studying the passage of time. Our understanding of space will depend on time.

The new clocks, described today in the journal Nature, will also promise what better atomic clocks usually promise: improved timekeeping, communication and navigation technologies. But in addition to their insights into the physical space around them, the devices could also help find gravitational waves, test out predictions of relativity and hunt for dark matter. All that, just from super-accurate clocks.

This might all seem pretty complicated (and it is), so let’s start with the basics. As the paper’s authors helpfully put it, “The passage of time is tracked by counting oscillations of a frequency reference, such as Earth’s revolutions or swings of a pendulum. By referencing atomic transitions, frequency (and thus time) can be measured more precisely than any other physical quantity.” So, count how often specific atoms switch between energy levels, and you’ll get the most accurate ticks and tocks.

The foremost name in atomic clocks is the National Institute of Standards and Technology (NIST), and that’s where today’s research comes from. The latest clocks rely on 1,000 atoms of ytterbium, cooled to near absolute zero, trapped within 1-D grids (ie, columns) made of laser beams. By all the measures of atomic clock performance — minimizing errors of the atomic frequencies, ensuring the ticks are stable, and its results are reproducible — the NIST researchers produced, just, unbelievably precise clocks. Their error bars are on the order of 10-18, or a billionth of a billionth.

The Shape of Things

In fact, these atomic clocks are so accurate, they’re actually sensitive to gravitational influences. Normally, the relativistic quirks of gravity that tweak the flow of time are too minute for us to notice — but not anymore. As the authors put it, “If these clocks were compared across a long baseline or used for remote comparisons with other clocks around the world, the measurement would be limited by gravitational knowledge on Earth’s surface.” That is, they’re so accurate that the only thing that could alter their ticks and tocks would be gravity itself. Clocks higher up, farther from Earth’s mass, would tick faster than clocks lower down, thanks to relativity.

This is a major deal for the science of geodesy, which measures Earth’s shape and gravitational influence. Our current picture of the planet’s precise surface depends on satellites and computer modeling, which provide pretty good resolution, down to a few centimeters. But these atomic clocks would bring that resolution way down, to just one centimeter. Armed with two of these clocks, researchers could compare sea level on two different continents, the precise height of a mountain, or any other height-based (and, thus, gravity-based) measurement they care to make.

And because the atomic clocks are so sensitive to gravity, they can serve as a kind of detector for any related activity. Gravitational waves, as they pass through us and this planet, would show up in these clocks’ readouts. Extremely subtle experimental tests of Einstein’s theories are now possible, as well. And most tantalizingly, the technology could help detect minute quantities of dark matter, the invisible stuff that only interacts with gravity, and makes up the bulk of the universe’s matter.

To be clear, these are still merely possibilities. The authors have only just built these atomic clocks and shown how accurate they are. But, now that they know the technology works this well, a new future of physics discoveries might just be upon us. It’s about time.