At The Other Monastery 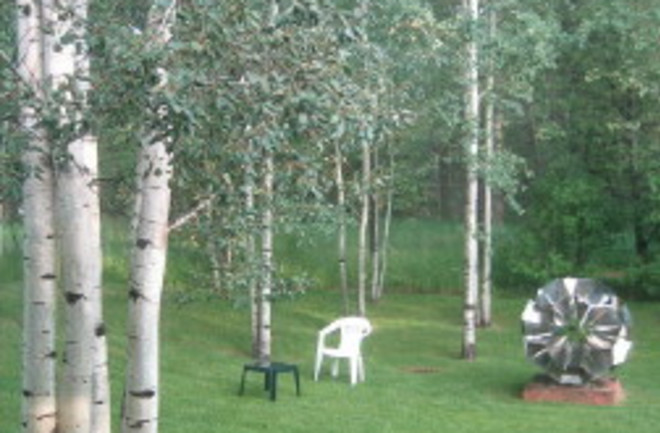 Drinking tea at high altitude again. Still a bad idea.... must remember to bring a pressure cooker next time. See this link if you don't know what I'm talking about. Yes, on my short tour of research hideaways this Summer, I'm at another monastery, the Aspen Center for Physics, where I'll be continuing my quest to get some coherent research thoughts fully explored before the end of the Summer and my other academic duties begin in earnest. For some of the time I'm here, I'll overlap with a couple of workshops in my area (and other interesting ones besides), and hence several old friends and colleagues, which is always very nice to do. I'm coming in near the middle of the workshop entitled "String Theory, Gauge Theory & Particle Physics", and have already today heard two excellent outdoor talks, one by Savdeep Sethi entitled "Can Time End?" and the other by Frederik Denef entitled "Factorization of BPS Degeneracies and the OSV Conjecture". We found out the answer to the first question when Sav firmly ran out of time before he got to say all he wished to. Seriously, his talk (see papers hep-th/0603104, hep-th/0601062, and hep-th/0509204 on the arXiv) is all about the physics of certain types of spacetime singularities -such as the one that lives in our universe's past- and whether we can make sense of the idea of space and time coming into being after such a singularity, while not existing prior to that. He describes certain recently constructed models using string and matrix theory which do give you some rather good control over such issues, it seems. The "funny region" -where time and space have no meaning- is handled (via a "dual" or "indirect" description) by a particular type of non-abelian gauge theory (for the non-expert: roughly the same sort of theory that, for example, describes how nuclei hold themselves together) which does not seem particularly exotic, despite the novel spacetime physics it allows them to get a handle on. This is typical of the kinds of things we're understanding a lot better about spacetime in recent years (and long before the AdS/CFT example, I should mention), which is that many puzzling questions about spacetime -such as how to describe a complete breakdown of its existence as a nice, smooth arena in which we live to for example the (expected) more primitive state of earlier eras in the universe's history- seem to be better phrased in terms of gauge theory questions.

Frederik (in action in the photo above) spoke about the subtleties in understanding the OSV conjecture, which is -if you've never heard of it- a nice conjecture relating properties of certain types of black holes to a seemingly irrelevant computation involving what are called topological string theories. I won't go into it here, but refer you instead to discussions of it on Jacques' blog. It is a technical discussion. Part of the issues of subtleties arising have to do with understanding the BPS spectrum -the spectrum of a very special set of objects in the theory which generically are extremely stable (and therefore useful to keep track of when you're trying to understand the physics)- when the theory takes you to places where the spectrum changes. "Moving across curves of marginal stability" would be the technical term to use, if you wanted to be in the in crowd. Typically, what happens is that some of these BPS states (generically, extended objects or "branes" of various types... see several earlier posts of mine for what branes are) are in fact bound states of smaller objects (other types of brane), which fall apart in certain regimes, thus changing the spectrum of what BPS states you thought you had available to you. Getting the count right is really crucial in understanding the big picture of what is going on with the conjecture. It should be a good time - very productive. There are a number of projects to move along, and also I'm burning to find time to sit and write up an idea I conceived on the plane over from the other monastery (thanks to Lufthansa's dreadful old falling-apart plane I took as a United code-share flight over from Frankfurt to Chicago - I think that United partners with some of these airlines just to make themselves seem really good -and they are, at least from my point of view). I basically ended up computing with good old fashioned pen and paper in one nine-hour sitting pretty much everything I needed because the flight -particularly the plane itself- was so substandard.

I'll try to get some cycling and hiking done on the side (got my boots here, and the Brompton folding bike -pictured on the right in a suitcase, ready to travel- is here with me and already in service) and since Ofer Aharony is here (hurrah!) I'll probably play (dreadfully) some basketball (I wish the rest of the old Rutgers basketball gang was here, for old times sake), and since Sav Sethi is here (hurrah!) I'll probably play some (lousy) volleyball (....and maybe cruise some bars.... er., research purposes only, of course). This is all once my bloodstream has remembered how to better transport the meagre supply of oxygen that you get in each breath at this altitude. -cvj P.S. There'll be two more public readings of that play (in progress) I'm writing with Oliver Mayer on Tuesday and Wednesday, in the greater Los Angeles area. If interested in going, please email me for more details. See here and here for earlier reading descriptions. We've got two new actors for two of the parts..... and yes -I can't believe it either- once again, you'll know them as having played shadowy evil characters from the show 24! I'm sure this is all a coincidence that it keeps happening.