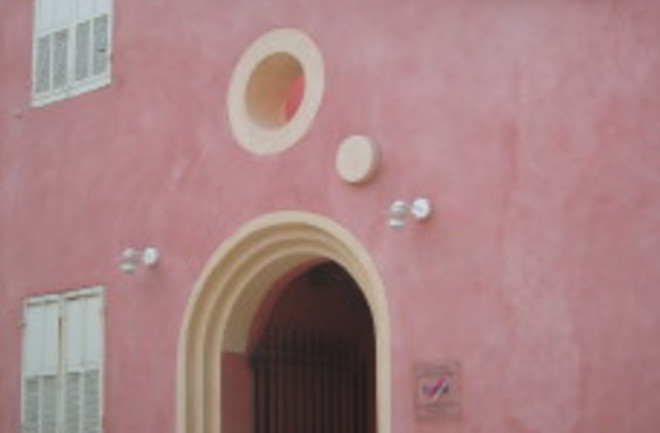 I've decided to live in a monastery for two weeks, along with several other physicists and mathematicians. It is quite pleasant. We have breakfast at 7:30am, lunch at 12:30pm, and dinner at 7:30pm. The latter two are proper sit-down affairs with several courses. We are served by several stern French women of an appropriate level of uncompromising sternness and impatience, who are -frankly- slightly scary. I'm looking forward to tonight's dinner especially, since the Thursday night special is one of my all-time favourite French dishes (and word)... Bouillabaisse. It is a local specialty. By now you've probably guessed, I'm in Provence (which I like to think of as a sort of prototype of Southern California, but that's another story). In particular, just outside Marseille, on the edge of the Mediterranean. The monastery is in fact the Centre International de Rencontres Mathematiques: C.I.R.M., as you can read on the doorway. Each day I wake up, eat, go to lectures, work in my room, work in the library, talk to people, and work some more. Apparently it is quite beautiful in the surroundings, but I've not gone to look yet. Maybe I will on the weekend. So what have I learned? Well, the setup is excellent. There are both mathematicians and physicists here, and a wide range of talks. In fact, the title of the workshop has "Affine Hecke Algebras" in it. If you stopped me in the street and asked me what an Affine Hecke algebra is, I'd have to tell you that I don't know what the Helle they are in any precise sense, but that does not matter. I'm learning a lot about what's been going on in some aspects of the physics and mathematics world in some areas, with a pleasingly European flavour which reminds me of my youth, since a lot of the European string theory and statistical mechanics stars from my past (gosh, almost 20 years ago!) seem to be here. At the same time, to my surprise, several relatively freshly minted young researchers that I know from over the water are here. It is nice. There have been several excellent talks. Particularly so since the physicists have been careful to spend the first half of their talk giving a general introduction for the benefit of the mathematicians before diving into technical details. As a result, while I am not sure that the mathematicians really benefit from this as much as is hoped, I think it just makes for a great 90 minute (with 5 minute break) physics talk for the physicists. As a result, you get a good idea of what the issues (at least in the mind of the presenter) are, and a bit of the background and history, before they go on to tell you what they have actually done recently. For example, Martin Schnabl just reported on what can only be described as spectacularly important nice results (see the paper, hep-th/0511286, here). Here he is, in action at the lovely multi-panelled blackboard which he used to great effect:

Among other things, he has managed to prove -exactly- Ashoke Sen's conjecture (see a review, hep-th/0410103, here) that in open string field theory, the famous open string tachyon instability indeed moves your vacuum from the one containing an unstable D-brane to a stable one corresponding to no D-brane, and that the energy difference between these two vacua corresponds to the mass-energy of the missing D-brane. (I've explained what D-branes are in a previous post, here. Diagram on left.) The picture to have in mind is that the system describes physics moving in a potential energy curve, V(T) , that looks like this:

The usual open string theory contains a "tachyon" field T which describes a negative mass-squared excitation (or particle, or vibration mode). Such modes simply mean that the vacuum is unstable, and the theory wants to go somewhere else. It corresponds to living at the top of the local hill on the curve. The theory is unstable to rolling off the top and settling into the stable vacuum, at the bottom of the local valley. Being at the top of the hill, the theory describes open string excitations corresponding to a D-brane (a D25-brane to be precise...the strings' ends can be anywhere in spacetime), and the idea is that the bottom of the hill contains no D-brane. It has gone away completely, leaving only the 26 dimensional closed string background. The mass-energy of the D-brane is soaked up in the potential energy difference in moving down the hill. (Cute. That Sen guy makes nice, sharp, conjectures, doesn't he? That's just the start of the story -there are other components to the conjecture- but I'll just focus on this aspect for now. There is a question mark at the bottom of the hill since it was not established exactly how this is to be described in its entirety, but the starting point is the String Field Theory.) Previous work in this area to check this so-called "tachyon condensation" process (starting with Sen and Zwiebach, but continued by many; see Schnabl's paper for references, and the review of Taylor and Zwiebach, hep-th/0311017, here) over the last eight years or so was able to show that this was probably true, by working in various approximation schemes in the String Field Theory. The approximation schemes -coming from cutting off the frequency (called the "level") at which the strings can vibrate in order to render their computer-aided computations tractable- were not satisfying (although surprisingly close to the correct answer even for crude truncations), but were the best that could be done. Hmmm. For you to appreciate the enormity of the task, I should step back a touch and tell you what string field theory is. Remember, just like on a musical instrument, you can get strings to vibrate at higher and higher frequencies. Each of those separate modes of vibration correspond to a new particle in the theory (higher the vibration frequency, the "level", the higher the mass of the particle), and specifically, there is a quantum field associated to such a particle that we have to incorporate into the physics. In ordinary physics, you have some number of particle species (say an electron and a photon, for studying the properties of electrons under the influence of electromagnetism....useful for getting the physics of your electronic devices right) and there is a quantum field for each species. Don't worry about what a quantum field is, just know that the basic toolbox "Quantum field theory" is arguably the most successful computational tool -as applied to nature- ever devised, since it allows you to compute the properties of electrons (say) to an incredible accuracy which has been checked experimentally to something like fifteen significant figures. See the nice book of Richard Feynman called "QED" for an accessible account of this. Quantum field theory is what we use to build the Standard Model of particle physics which is tested at collider experiments, like the LHC to come. Search this blog for "Standard Model" and "LHC" for more. Well, with the string, since it has an infinite number of modes of vibration (like your guitar, piano strings or violin, if they were perfect, in an approriate sense), there are an infinite number of particles, and hence quantum fields, to deal with in one go. So String Field Theory is an incredibly complicated piece of technology since it has an infinite number of fields. Nevertheless, you can write down (due to the work of early pioneers like [strike]Graeme[/strike] Warren Siegel, and crucial understanding of the interaction terms (in terms of non-commutative geometry, star products, and other goodies) given by Edward Witten, all back in the 80s... and several other workers who will hate me for not mentioning them, but since they do not read blogs I can safely refer you to the references in Schnabl's paper) a remarkably elegant and simple equation (the "action") for the theory:

([Cheekily snipped from Martin's paper.] That's just to show the non-expert that we write down real equations, and are not making stuff up -at least not here. I'm not going to explain this equation, but just thought you'd like to see what the basic object looks like.) Simple as it is (yes, in the scheme of things, really it is) for many questions (such as checking whether the structure of the vacuum is as Sen said it is) the physics of this equation is hard to study exactly, because of this business of having to deal with an infinite number of fields (hidden in the object denoted by the Greek letter psi) in the computation. This is why people have truncated the theory, hoping that the neglected high mass modes don't affect the theory as much as the lighter modes. This turned out to be correct - a simple truncation to keep only the first two levels gets the answer (for the mass of the brane) 97% correct, and a few more levels gets you to 99% and beyond pretty quickly. (I'm quoting the content of the last sentence from memory, so I might be a little off. The exact number of levels does not matter to the point, really.) But Schnabl has shown how to get the whole thing exactly, analytically. No computers involved, no level truncation. He works with all the infinite fields elegantly at once, if you like. He does this essentially by a clever choice of basis for his space of states in his conformal field theory computations, so that when he comes to evaluate the action, he can write rather elegant closed forms for the exact solutions for the equations of motion. (As an aside (and amusingly, the thing that caught the eyes of some of the mathematicians more than the actual physical result), if you're a fan of the Bernoulli numbers, he's found new identities for them that are quite novel and probably significant mathematically. The solution involves them explicitly.) I'm not going to describe the technical details since that would be pointless here. Read the paper, if interested. Feel free to discuss it, and conclusions you draw from it, at any level you wish to in the comments. Let me close by noting that, to me, this is a very significant result in the scheme of things. We're ultimately looking to describing Nature with strings one day, and we need to understand the space of solutions of the theory. What are they? How many are there? Etc. This is very hard to explore with certainty, even in a simple theory such as the 26 dimensional vanilla open string theory which was the context above. We'll need to do it for much more complicated string theories, and maybe even away from the point where the strings are weakly coupled and easy to identify as the appropriate degrees of freedom. The above example is a rare case -especially in higher dimensional or "critical" string theory- where an exact computation allows one to track the dynamics of the vacuum of string theory in an off-shell formulation. (It is possible in several cute toy models of non-critical strings in low dimensions, such as those I've described in other posts here and here). This is the sort of thing of which we need a lot more before we have believable control over statements about what non-supersymmetric vacua of string theory are really up to. Until we have control over these issues, we've got to be very careful about what we're doing in this context, taking explorations of such vacua -and phenomenological conclusions which may be drawn from them- as interesting, but highly tentative. -cvj