At 100, James Lovelock Has New Ideas About Gaia and Earth’s Future 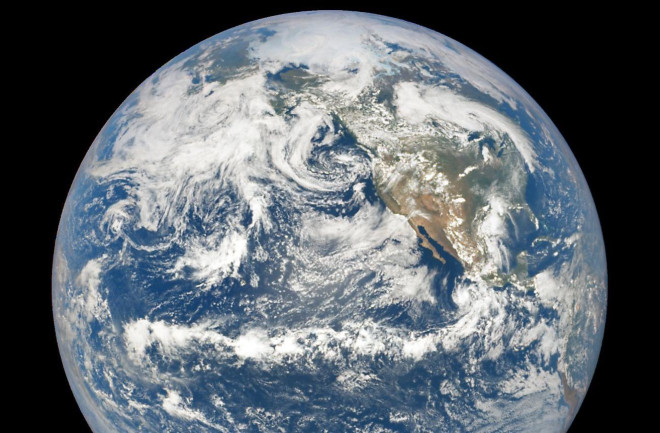 Our blue-marble planet, imaged by the DSCOVR spacecraft. Life maintains a stubborn balance here — but for how long? (Credit: NOAA/EPIC)

James Lovelock has a lot to celebrate. The renowned British futurist and environmentalist just enjoyed a 100th birthday party with his wife and friends. Over his long career he has seen his once-controversial Gaia hypothesis steadily gain significant acceptance among his colleagues. And capping all that, he has just published Novacene, a book that predicts the impending end of the world – but does so in a gently, almost loving style. Lovelock may be the happiest pessimist I’ve ever spoken to.

Optimism has always been baked into Lovelock’s worldview. In 1974, at a time of energy crises and political crisis, he came up with his signature idea about life on Earth, working in conjunction with evolutionary biologist Lynn Margulis. The Gaia hypothesis posits that Earth behaves as a single, self-regulating organism.

Over billions of years, as the Sun has grown brighter and continents have risen above the seas, life has influenced the composition of the land, water, and air in ways that have helped keep temperatures stable within the narrow range that is necessary for biology. Without life, Earth might have frozen solid or boiled over; with life, it has remained just right. The problem, according to Lovelock, is that we are nearing the limits of what Gaia can do.

In another billion years or so, the ever-brightening Sun will overwhelm life’s ability to compensate. Long before then, humans may reset Gaia completely in a way that could spell our doom. That latter scenario is the subject of Novacene. Lovelock envisions that artificial intelligence will soon dominate the Earth (though he never defines “soon”—it could take decades, it could take millennia). At that point, AI will also take control of the Gaia process, an idea that I discuss more fully in a separate story.

At first, the AIs might collaborate with us humans to protect the planet. Over time, though the Gaia imperative will lead them in a new direction, refashioning the planet in ways that are optimal for synthetic life but quite possibly deadly for us. But Lovelock, for one, welcomes our future AI overlords. I spoke with him about his surprising embrace of humanity’s demise, and about his perspective on life after 100 years on the planet. An edited version of our discussion follows.

What inspired you to write Novacene and to lay out such a dramatic vision of the future?

To be completely honest, to some extent I wrote the book to help our survival as a family. Money doesn’t grow on trees! You have to work, and I’m one of those who keeps working regardless of age. At the same time, in my mind was the idea of the planet as a self-regulating entity. It’s an extension of the concept of life itself. You can’t help but wonder where it will lead, and the wondering led to the book.

James Lovelock at 100, relentlessly optimistic even as he contemplates the last days of life on our planet. (Credit: Sandy Lovelock)

In the book, you imagine that future artificial intelligence (AI) will have a physical form—cyborgs, you call them. Couldn’t they just as well exist virtually, entirely within a computer world?

That’s a good point. I chose to consider one given form and left it at that, but I agree with you that it could be a different form of life. Its significance would depend on what powers it had, regardless.

A number of futurists, most notably Ray Kurzweil, envision a coming convergence between humans and AI. You imagine they will follow separate paths. Why?

The reason why I have the view expressed in the book came from working with my colleague Lynn Margulis. She was a famous biologist who now is sadly dead. She figured out that the different kingdoms of life formed about 700 million years ago by a process called endosymbiosis [one organism living inside another in a cooperative manner]. More than one form of life combined.

We and plants together are made out of more than one form of life. These combined sometime in the past and produced animals on the one hand and plants on the other. Both evolved in a Darwinian fashion, but the end result was very different. Animals move and think do all sorts of active things, of course. The plants just sit in the ground and collect the energy from the Sun. I was thinking of cyborgs as another kingdom of life, if you like. We would stand to them in much the same way as we, as a kingdom of animals, stand to plants.

Given that huge evolutionary gap, what would cyborgs think of us?

Our thinking process is 10,000 times faster than that of plants. In that kind of speed difference, we would stand to cyborgs in much in the same way as plants stand to us. We think we’re very bright when we’re not really. You might imagine that this difference would make us very dull to cyborgs, but not at all. Think of the way you go to a great arboretum to look at the plants and whatnot and take your children along with you.

What would a world run by cyborgs be like for us? Would we be able to communicate with them, even?

Oh, heavens, I can’t just imagine. I tried to because it would have helped the book to put it in, but I can’t imagine. It must be a bit like a dog trying to understand a genius. I don’t think they can do it.

Why would synthetic life—cyborgs, in your terminology—want to cooperate with humans initially?

The dominating feature of my writing, here and elsewhere, is the Earth itself. We don’t have much longer surviving on this planet [because of the brightening of the Sun]. It’s a very dodgy future. Cyborgs are limited by the properties of the Earth, too. You’ve got to be very careful how you treat it and you’ve got to be a good gardener or so to speak. The cyborgs will know all the tricks and they will soon find that working with us in a benevolent way is much better than trying to have a war, or something like that.

Yes, we are making pretty prideful mistakes leading to global heating. Part of the problem is there’s just too many of us. Even so, Earth is still just about in balance. Through Earth’s history there have been some very disruptive phases; think of the Permian Period. But life did survive all of it. It’s amazing that we did.

If cyborgs take over, will that be the final stage of life on Earth, or could there be another era after that, and so on?

It will be the final era of life, I think. Earth’s chances of surviving a lot longer, astronomically speaking, are very poor. The sun is warming up and nothing will stop it. It will heat up until it becomes a red giant and there will be no Earth worth having then.

Even your cyborgs won’t be able to figure out a way to survive, then?

Keep in mind that cyborgs will be able to think at least 10,000 times faster than we do. One consequence is that, for them, time will be extended. The future [until the Sun overheats the Earth] will seem an absolute eternity to a cyborg. They may not worry about what seems, to them, an unbelievably distant future.

You argue, in Novacene and elsewhere, that Earth might be the only living planet in the universe. That goes strongly against the grain of modern astrobiology. Why do you think so?

Time. The cosmos started with the Big Bang, some 14 billion years ago, but it took an awful long time for the consequences of the Big Bang to settle down. Eventually stars dotted all over the cosmos. Then a long period passed while the stars evolved and spread elements of different kinds into the cosmos. Then it took more time for planets to condense from them, and so on.

When you add up all the times for those events, it’s amazing that the Earth actually formed. The cosmos is limited to the output and products of the Big Bang, and there wouldn’t have been planets like the Earth until a certain time. It’s not surprising that we haven’t advanced very far yet. I’ve been involved personally in the search for life on other planets. I went to JPL an awful long time ago to work on that kind of project. I think the chances [for intelligent extraterrestrial life] are very poor.

Those are some heavy ideas to bear on your shoulders. Do you put them all aside when you live your daily life?

Well, I think we’re pretty human, my wife Sandy and I. We’re not strict, unbending, scientifically inclined people. We have a statue of Gaia in the garden and sometimes we look at her and think, or if it’s a fine day we go for a long walk or things like that.

You have seen extraordinary changes in the world over your 100-year lifetime. What do you imagine will happen in another century? Could the Novacene era emerge by then?

What a wonderful thought. Well if it does and there are as many changes as they have been in my own life, it’s going to be quite an exciting place.

“Exciting”? You remain an optimist even though you are anticipating a post-human age of life on Earth?

I’m now past a hundred and to have an optimistic view is the only one worth having.

Maybe when you write your next book, we’ll speak again.