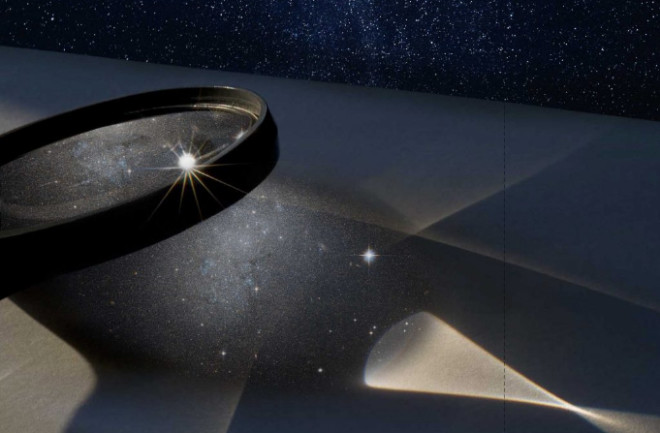 (Credit: MIT/Image courtesy of the researchers)

When even the most powerful telescopes can’t capture the views you want, it helps to have natural magnifying glasses to rely on. In a paper published Monday in Nature Astronomy, researchers describe how they zoomed in to capture a young, star-forming galaxy roughly 9 billion light-years away in X-ray light.

To study such a distant galaxy, the researchers took advantage of the fact that massive objects can warp space-time around them and magnify light from background objects. Astronomers have used this effect, called gravitational lensing, to study distant galaxies in various wavelengths of light before. But this is one of the first times researchers using this technique have been able to capture a distant star-forming galaxy in X-rays.

The team’s work demonstrates that this technique is possible with existing telescopes, and shows that it can be a powerful new tool for studying star formation in faraway galaxies.

To use gravitational lensing, astronomers need to find massive objects that are aligned just right with distant galaxies in the background. They call the intervening massive object, often a galaxy or galaxy cluster, a gravitational lens. This massive “lens” warps the space-time around it; light from the distant galaxy in the background, which would otherwise be blocked by the intervening object, follows the warping and appears to us like an arc of light stretched around the lens.

The team, led by astronomer Matthew Bayliss, then at MIT, pointed NASA’s Chandra X-ray Observatory at the so-called Phoenix Cluster. This group of galaxies sits 5.7 billion light-years away and is one of the largest galaxy clusters known. Researchers already knew that this monster lenses some background galaxies, but Bayliss’ team was excited to find that they picked up magnified X-ray light from a background galaxy, too.

They discovered that this distant dwarf galaxy, roughly 9 billion light-years away, has two distinct clumps of newly forming stars.

Seeing star formation happening in galaxies with X-rays is difficult because galaxies where stars and star formation make up most of the light are relatively faint. Galaxies whose light mostly comes from the activity of their central black holes, or active galactic nuclei, are generally much brighter and easier to observe.

Observing a faraway star-forming galaxy in X-rays is exciting because those X-rays come from the most massive stars. Specifically, they come from binary systems of massive stars in which one has collapsed into a black hole or neutron star and is consuming matter from the other.

Studying these distant galaxies in X-ray light may help scientists answer outstanding questions about massive stars. Astronomers know massive stars are often in binary systems, but do they always form in pairs or not? Massive stars shed a lot of gases throughout their lives, but in what ways does that affect their environments and how other stars form?

“It’s really a new window into studying the properties of the most massive stars that form in the distant universe,” Bayliss said.