Astronomers Will Be Ready To Study Future Supernovas In Action

New methods will allow researchers to glean more data than ever from the next stellar explosion. 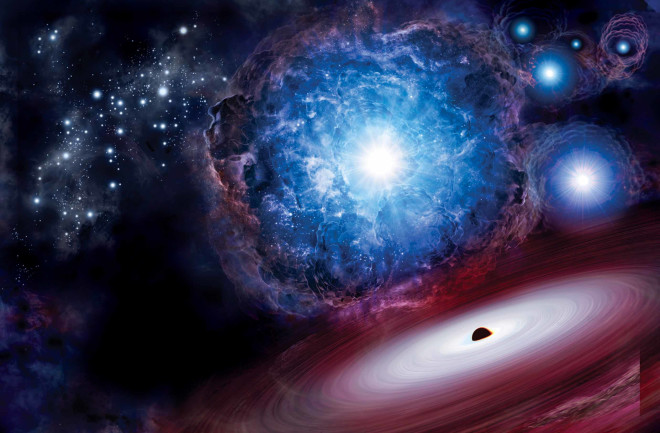 Supernovas, the dramatic bursts of massive stars, are among the most violent explosions we've seen in the universe — and there's always a chance one could go off in our galaxy soon. (Credit: Roen Kelly/Discover)

In the year 1006, our ancestors witnessed the biggest natural light show in recorded history. A new “guest star,” as Chinese astronomers called it, appeared one night without warning. It was brighter than a crescent moon and visible in daytime. As months passed, the star dimmed until it was no longer visible over a year later.

Today, we know the guest star of 1006 was a supernova. The most violent explosions known, supernovas can briefly outshine the rest of a galaxy. The most common ones happen when a massive star starts to run out of fuel. Running on fumes, it can’t keep up enough internal pressure to balance out the intense gravitational forces of its tremendous mass. As a result, its core collapses into a neutron star or a black hole, taking most of the star out with it.

Supernovas are rare; less than 1 percent of all stars are big enough for such a fiery death. (Our relatively small sun will fade away gracefully as a white dwarf.) In a galaxy the size of our Milky Way, though, astronomers estimate roughly one or two supernovas should still light up per century. Yet the last supernova observed in our galaxy was in 1604 — more than four centuries ago. The telescope wasn’t even around yet!

We’re long overdue, and there’s always a chance a new guest star could grace the heavens this very night. It would be the astronomical event of the century. So, what would happen then?

The "guest star" of 1006, actually a supernova, is now a much dimmer supernova remnant. (Credit: NASA/CXC/Middlebury College/F. Winklerch)

Our first notice of a supernova would likely not be its light, but rather a stream of particles called neutrinos.

Neutrinos are tiny elementary particles, like electrons, but they hardly interact with matter. Trillions stream through your body every second with no ill effect. A supernova produces lots of neutrinos — as many in a few seconds as there are atoms in the sun — so a stellar blast would unleash a tidal wave of the particles.

“If there’s a supernova in the galaxy, then all the detectors around the world should, at the same time, record a burst of neutrinos,” says Kate Scholberg, a physicist at Duke University.

We know supernovas create neutrinos because in 1987, one went off in the Large Magellanic Cloud, a neighboring galaxy just 170,000 light-years away. Dubbed Supernova 1987A, it was the first source of neutrinos identified beyond our solar system. Three detectors, thousands of miles apart, recorded neutrinos from the explosion at the exact same time. What’s more, the neutrinos arrived a few hours before the visible light did. This is because neutrinos escape the collapsing core immediately, but visible light takes longer, caught up in the outer atmosphere of the exploding star.

To take advantage of this early warning system of sorts, Scholberg coordinates efforts for the SuperNova Early Warning System (SNEWS), a network that will send out an alert if two or more neutrino detectors report a burst at the same time. Anyone can sign up for SNEWS alerts, from professional astronomers to the general public, by visiting snews.bnl.gov and click on “mailing lists.” Scholberg says an alert would go out just seconds after initial neutrino detections, and there have been no false positives yet since operations began in 2005.

After the alert goes out, the scramble begins. While neutrinos will tell you that light from a supernova is on its way, it does not tell you its origin. There’s a lot of space it could be coming from, and it may even be hiding behind a large dust cloud. It’s happened before: In 2008, astronomers ran the clock backward on an expanding supernova remnant, and they concluded that the original blast occurred between 1868 and 1908. Dense dust clouds obscured the event from us completely.

In fact, based on galactic dust, the odds of the next supernova being as bright as the historic “guest stars” are just 10 percent. The odds are better — as high as 30 percent — for a supernova at least bright enough to see with the naked eye from a dark-sky location with little light pollution.

Such faint galactic supernovas worry astronomers. Without any way to narrow down the origin, “it would currently take a long time to cover the entire sky and find a faint supernova,” explains Federica Bianco, an astrophysicist at New York University. The dimmest and farthest blasts might never be found.

Hopefully this won’t be a problem for much longer. Bianco is working on the Large Synoptic Survey Telescope, a powerful new telescope under construction in Chile. By 2022, it will photograph the entire Southern Hemisphere sky each night, turning up millions of clues daily on new lights to check out, ranging from asteroids to stars swallowed by black holes. If a faint supernova goes off in our galaxy at that point, the hard part will be finding it in the fire hose of data each evening.

Work progresses on the assembly of the Large Synoptic Survey Telescope's dome in May of this year at Cerro Pachon. If all goes well, the observatory will capture the whole southern sky every night, and find even the faintest supernova. (Credit: LSST Project/NSF/AURA)

Should one go off nearby, we’d learn a ton about supernovas, thanks to the technology at our disposal. Observations could go beyond visible light, allowing researchers to analyze a supernova in other forms of radiation, from radio to gamma rays. And every supernova we’ve ever seen (except for SN 1987A) was millions of light-years away, so spotting one so nearby — merely thousands of light-years distant — would provide unprecedented detail. Astronomers still have many questions about the blasts, such as how their earliest stages unfold and how the collapsing core’s shock wave interacts with its surroundings. A nearby supernova could finally give us answers.

Until the alert goes out, it’s a waiting game. We have no idea whether the next galactic supernova will happen tonight, or decades from now. But whichever it turns out to be, astronomers are prepared. “The neutrinos are on their way,” says Scholberg. “We’d better be ready to get as much as we can out of it.”

Voted ‘Most Likely to Blow Up’

It’s impossible to predict a supernova, but that doesn’t mean astronomers don’t have any guesses. Many suspect Eta Carinae, a binary system that appears as one star of middling brightness in the Southern Hemisphere’s sky, could be about to blow.

Eta Carinae lies 7,500 light-years from Earth, and the larger of the pair is nearly 100 times more massive than the sun, and 5 million times brighter. The system is already in the unstable stages of the end of its life: In the mid-19th century, astronomers recorded an outburst where Eta Carinae became the second-brightest star in the sky. It lasted for two decades before the star disappeared to the naked eye altogether. Astronomers are still uncertain about what triggered the “Great Eruption,” but they estimate this star shed about 12 times the mass of the sun then; it’s still visible around the star today.

If Eta Carinae goes supernova, we’re in no danger. The only effect would be a temporary new “guest star” similar to Venus.

This article originally appeared in print as "Tonight's Supernova."