Astronomers Use X-rays To Trace The Shape Of Black Hole 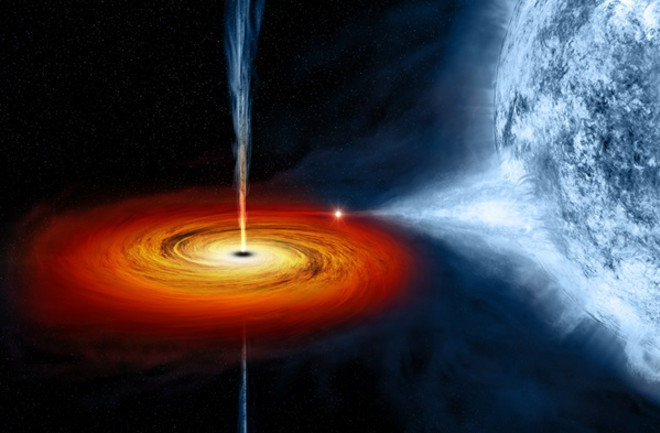 Cygnus X-1 is a black hole feeding off its nearby binary companion, a young blue supergiant star. (Credit: NASA/CXC/M.Weiss) Discovered in the early 1960s by rocket-borne X-ray detectors, Cygnus X-1 is a binary system containing a supergiant star and a stellar-mass black hole. That black hole is both accreting matter — pulling gas off its companion and funneling it into a swirling disk — and shooting out powerful jets. The processes of accretion and jet formation give off X-rays we can detect here on Earth, but the question is, what exactly is going on? Formerly, astronomers had developed two possible geometrical models for what the area close to the black hole looked like. Now, in a recent paper published in Nature Astronomy, researchers from Japan and Sweden have determined which model is most likely. They’ve found that this particular black hole, at least, has an extended flat accretion disk with a spherical, extended cloud of heated gas in the center.

Cygnus X-1 (also called Cyg X-1) is one of the most famous black holes in our galaxy. It is the first source that astronomers could agree was a black hole, and the subject of a well-known 1974 bet between Kip Thorne and Stephen Hawking. Thorne bet that Cyg X-1 was indeed a black hole, while Hawking bet that it wasn’t. By 1990, when the majority of the astronomical community had agreed the source of X-rays in Cyg X-1 was a black hole, Hawking conceded the bet (and subsequently, as per the conditions of the wager, bought Thorne a year’s subscription to Penthouse magazine). The system, which sits about 6,100 light-years away in the constellation Cygnus, contains a young blue supergiant star (HDE 226868) about 20 times the mass of our sun, and a black hole about 15 times the mass of our sun. It’s called a high-mass X-ray binary because the companion star (the supergiant) is massive and the black hole gives off X-rays. The two orbit with a distance between them of only 0.2 astronomical units (AU; 1 AU = 93 million miles [150 million km]), about half the distance that Mercury orbits from our sun. (Earth orbits at 1 AU, for reference.) The X-rays we receive from the system vary every 5.6 days, which accounts for one orbit of the supergiant and the black hole, as well as every 300 days, which astronomers believe is due to precession of the jets. Because the jets are not shooting out straight up and down (from our viewpoint), that slight tilt changes as the black hole moves, causing the longer variation. As the black hole sucks in matter from its companion, that matter swirls into an accretion disk, making its way inward until it eventually falls past the event horizon and disappears from view. The accretion disk is extremely hot – so hot that it shines in energetic light: X-rays and even gamma rays. Astronomers’ current picture of the accretion system around a black hole includes both the flattened disk, as well as a spherical “corona” of hot gas, which gives off hard (high-energy) X-rays, near the black hole. On top of that, Cyg X-1 also has jets, which shoot out perpendicular to the disk from near the event horizon. Astronomers don’t know exactly what causes the jets, though they suspect magnetic fields come into play.

There are two leading models of the accretion disk and corona that astronomers use to explain the X-rays we see from Cyg X-1 and other similar systems. The first, called the lamp-post model, envisions the corona as a compact region of gas tightly bound to the black hole, but not surrounding it. In the second model, the extended model, the corona is a larger region of gas that encompasses the black hole entirely. The two models produce different observations — X-rays from the disk and corona are bent or scattered differently, depending on the geometry of the system. To differentiate between the two models, the researchers here used a technique called X-ray polarimetry: They measured the orientation of incoming X-rays — e.g., they looked at the direction the light was vibrating — to build up a picture of how those X-rays had been scattered when they left the black hole system. If you have a hard time picturing that, consider a real-world example. Polarized sunglasses or snow goggles are designed to screen out certain types of light — in this case, visible light from the sun oriented, or vibrating, in a certain direction, as it reflects off surfaces such as snow. But “there are no such ‘goggles’ for these rays [X-rays and gamma rays], so we need another special kind of treatment to direct and measure this scattering of light,” said Hiromitsu Takahashi of Hiroshima University, a co-author on the study, in a press release. Instead, the team used an instrument called a polarimeter, launched aboard a balloon called PoGO+, to measure the orientation of the X-rays and find out how they were reflecting off the accretion disk. From there, they could work backwards to determine the corona’s shape. If the corona looked like the lamp-post model envisioned, such a compact region should significantly bend photons toward the accretion disk, which would then reflect more of the light. If it looked like the extended model, there should be a weaker gravitational influence, less bending of the X-rays, and less reflected light off the disk.

Polarization occurs when light vibrates in the same direction. This often occurs when the light is reflected. In this illustration, polarized sunglasses filter out scattered light; because no such filter exists for X-rays, the astronomers in this study instead measured the polarization of all incoming light to determine whether much of it was polarized (reflected) or not.(Credit: Masako Hayashi, CORE-U, Hiroshima University) The result? The team observed only weak bending of X-ray light (in technical terms, a low polarization fraction) from Cyg X-1. They concluded that the extended corona model more accurately describes what’s going on in this system. Using this information, scientists can now better model all of the processes going on around the black hole, because they know what the disk and corona look like. In particular, they can better study the spin of the black hole itself — Cyg X-1’s event horizon is believed to be spinning about 800 times a second, close to its maximum rate. That spin rate can affect space-time around the black hole, and also perhaps tell astronomers more about the black hole’s birth and evolution over time. And Cyg X-1 is only the beginning. “The black hole in Cygnus is one of many,” Takahashi said. "We would like to study more black holes using X-ray polarimetry, like those closer to the center of galaxies.” That information might bring us closer to understanding not only how black holes evolve, but the galaxies around them as well. This article originally appeared on Astronomy.com.