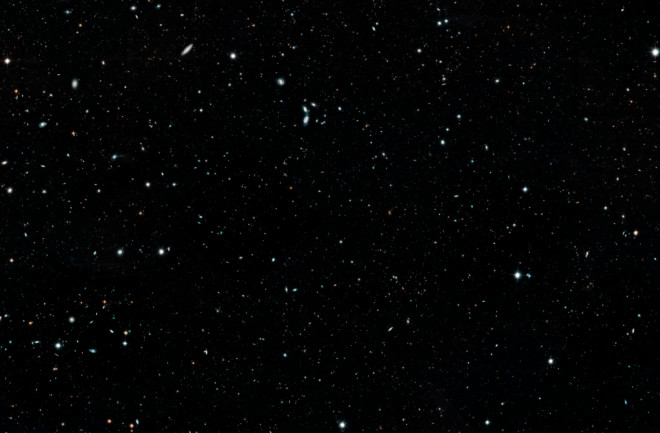 The Hubble Legacy Field peers back to the early days of the universe. (Credit: NASA/ESA/Hubble Legacy Field Team) The Hubble Space Telescope has outdone itself once again. By leveraging multiple deep surveys that peer across the cosmos and back to the first 500 million years after the Big Bang, astronomers have created the deepest, widest portrait yet of the distant universe. Astronomers combined 7,500 exposures containing 265,000 galaxies into one image representing more than 250 days of Hubble observing time. Like other deep surveys, astronomers can use it as a time capsule from the early universe, and as a portal into more than 13 billion years between then and now.

Peering back through time and space

The Legacy Field contains galaxies from the modern universe back to the first galaxies -- and they've changed a lot over the eons. (Credit: NASA/ESA/Hubble Legacy Field Team) The new image, called the Hubble Legacy Field, is a mosaic of many previous Hubble surveys. The first time Hubble stared into the abyss was in 1995, when the then-director of the Space Telescope Science Institute decided to dedicate his discretionary time to peering into an apparently empty patch of space. The gamble paid off, and the result was a plethora of galaxies known as the Hubble Deep Field. Many of the objects that turned up in the image are located at the farthest edge of the universe; their light has traveled for billions of years to reach Earth. That means we’re seeing them as they were just after the Big Bang, when galaxies were new features of the universe. After that first image, Hubble started visiting a different patch of space over and over with multiple different surveys, including the Ultra and eXtreme Deep Fields. It has widened the area of exploration until it now covers an area almost as large as the full moon. And Hubble has looked with different cameras and instruments over the years, so it now has images from the ultraviolet to the near-infrared. By peering back through space and time, astronomers have learned more about how early galaxies formed and evolved, often from violent collisions with one another, which appear clearly in throughout the deep field images. And now, astronomers have woven all those images together into one enormous tapestry, spanning time and space and wavelengths, to give a multi-dimensional view into the distant universe. Not all of the Legacy Field is created equal. Each piece of the mosaic covered a slightly different patch of sky within the field of view, with slightly different instruments. But the core of the image combines the best of all the surveys. It represents an enormous degree of time for Hubble – over eight months of observing time. And until future telescopes come online, it’s the sharpest, deepest view astronomers will get of the universe’s early days. Yet missions like NASA’s planned WFIRST (Wide Field Infrared Survey Telescope) could surpass it. WFIRST has had a troubled path. It’s listed as a top goal according to the National Research Council’s 2010 decadal survey, meant to guide astronomy priorities – and funding. But it’s been on the White House Budget Proposal chopping block for a few years running, only to see Congress restore its funding each time. Garth Illingworth of the University of California, Santa Cruz, is the leader of the team that assembled the Legacy image. He pointed out in a statement that, “The Legacy Field is a pathfinder for WFIRST, which will capture an image that is 100 times larger than a typical Hubble photo. In just three weeks’ worth of observations by WFIRST, astronomers will be able to assemble a field that is much deeper and more than twice as large as the Hubble Legacy Field.” [embed]https://media.stsci.edu/uploads/video_file/video_attachment/5047/STScI-H-v1917a-1280x720.mp4[/embed]