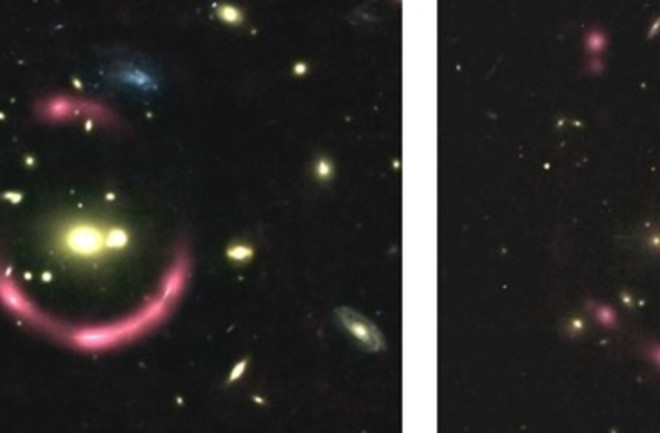 These two Hubble images show gravitationally lensed galaxies and their halos (pink), as well as the galaxy clusters (yellow) responsible for the lensing. Gravitational lensing often results in more than one image of a single galaxy (right), or sometimes smears that light out into a ring (left). (Credit: ESO/NASA/ESA/A. Claeyssens)

Galaxies are not just the glowing stars and gas you see through a telescope. They are swaddled in a huge ball, or “halo,” of hydrogen that stretches vast distances into the empty space between them. These halos are usually challenging to see and study, but it’s just gotten a little easier, thanks to a combination of nature’s own magnifying technique and the excellent vision of the Multi Unit Spectroscopic Explorer (MUSE) on the European Southern Observatory’s Very Large Telescope.

Two new images showing these glowing halos of gas have been released as part of a study presented June 25 during the annual meeting of the European Astronomical Society by Adélaïde Claeyssens of the Centre de Recherche Astrophysique de Lyon. These images, taken with the Hubble Space Telescope, show gravitationally lensed galaxies and their, in this case, easy-to-spot halos. Gravitational lensing occurs when a massive object, such as a galaxy cluster, sits between another object — say, a single galaxy — and Earth. Einstein’s theory of general relativity states that the gravity of a massive object — the cluster — bends space-time around it. When light from the background galaxy encounters this bent space-time, it curves around the cluster, allowing us to see the faraway object.

That light is often not only bent but magnified as well, giving astronomers an intimate peek at details normally invisible in objects so very far away. It is this effect that Claeyssens’ survey uses to its advantage, pointing MUSE at these magnified galaxies to glean information otherwise impossible to get.

MUSE is a powerful instrument that splits images it sees into 24 smaller units, called sub-fields. It’s like placing a grid across the image of a galaxy to break it up into 24 boxes. Each of those boxes sends light to a spectrograph, which breaks the light apart by wavelength to get information such as composition and motion, including speed and direction. Instead of spitting out global properties, or just basic information about the halo as a whole, this technique lets astronomers zoom in on specific parts of the halo to look for variations in the gas.

Based on their observations, Claeyssens’ team will now study the kinematics, or motion, and other properties of the gas, not just as a whole, but across the halo. That’s important, because the team can see whether the gas has the same composition and motion throughout the halo, or whether it differs with distance or location around the galaxy.

Such information, in turn, will tell astronomers more about how galaxies form and evolve, including how they might lose, gain, or share material through these massive shrouds of gas.