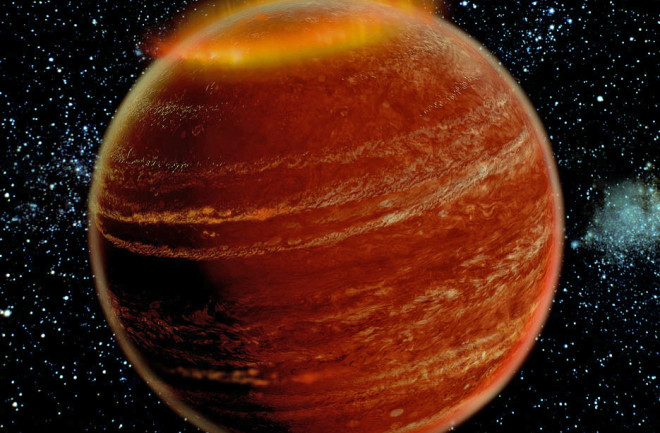 For the first time, astronomers have spotted an aurora, akin to our northern and southern lights, shimmering on a world outside our solar system. The find may bolster the search for extraterrestrial life, since the magnetic fields that drive auroras likely keep planets habitable.

Every planet in our solar system (and even some moons) with a moderate magnetic field boasts these celestial light shows. They occur when charged space particles, typically from the sun, stream along a planet’s magnetic field lines and interact with atmospheric atoms, producing not only optical light but also radio emissions.

Gregg Hallinan of the California Institute of Technology and colleagues have detected both types of radiation from what appears to be a brown dwarf, an object that straddles the boundary between planet and star. The world’s aurora, reported in Nature in July as about a million times brighter than Earth’s, suggests that brown dwarfs have magnetic activity more like planets than stars. Hallinan hopes more observations shed light on the origins of the charged particles that power the aurora, which are currently unknown.

The brown dwarf in question, called LSR J1835+3259, lies 18 light-years away, suggesting astronomers may soon glimpse auroras on similarly distant planets, too. That could help narrow the search for habitable planets, since the auroras reveal the strength of their planets’ magnetic fields, which can shield against harmful stellar radiation and help retain life-friendly conditions.

[This article originally appeared in print as "Alien Aurora."]