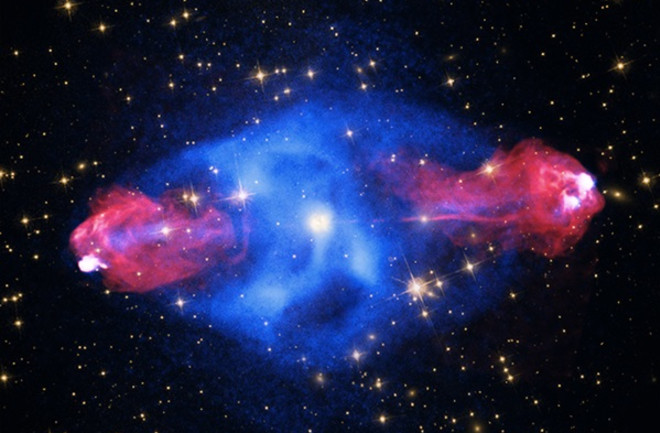 This composite image shows Cygnus A in X-rays (blue), radio waves (red), and opitical light (yellow). The two jets from the galaxy's supermassive black hole generate hotspots, which are located about 300,000 light-years from the galaxy's center. (Credit:NASA/CXC/SAO)

Supermassive black holes lurk in the hearts of every large galaxy. Some blast out jets that can spill into its host galaxy or even beyond. The energy carried by the jets is deposited in the surrounding material, playing a crucial role in the evolution of the galaxy and, in extreme cases, other galaxies nearby. And thanks to recent observations of the famous galaxy Cygnus A with the Chandra X-ray Observatory, astronomers have gotten a closer glimpse at just how those jets work — and how things are not always as straightforward as they seem. Instead, Cygnus A’s jets seem to be bouncing around, deflected off walls of gas and gouging out holes in the material in the process.

Inside a radio galaxy

Cygnus A is a massive elliptical galaxy; it is also one of the most powerful sources of radio emission in the sky. Astronomers believe that as material falls onto the supermassive black hole in Cygnus A’s center, the black hole launches huge, energetic jets that generate radio waves picked up here on Earth. Radio galaxies like Cygnus A are intriguing objects, but most are hard to study because they’re also distant. At 600 million light-years away, “[Cygnus A] is actually exceptionally close for galaxies of its similar luminosity and jet power, which are found at much higher distances,” explained Amalya Johnson of Columbia University during a press conference Jan. 9, at the 233rd meeting of the American Astronomical Society.

Cygnus A also gives off X-rays, allowing astronomers to study it with Chandra. And in Chandra’s view, the eastern and western sides of the galaxy glow with “hotspots,” where the jets come crashing up against intergalactic gas, depositing large amounts of energy into the particles there and making them light up. These hotspots, labeled A, B, D, and E, were the focus of a recent study. Chandra stared at the galaxy for 23 days, allowing astronomers to zoom in on a strange region near hotspot E with no X-ray emission.

“This feature was of interest to us because it has not been seen before in galaxies like Cygnus A or on this scale, and is not seen around any of the other hotspots in Cygnus A,” said Johnson. She and her colleagues compared X-ray emission from the dim area to the regions around it, finding that the dim region is a hole, or cavity, carved out in the galaxy’s gas. That hole is also deeper than it is wide, instead of a simple sphere, as the team had first assumed. Based on their estimates, the hole is between 50,000 and 100,000 light-years deep, but only about 26,000 light-years wide. (For reference, the distance between the Sun and the center of our Milky Way is also about 26,000 light-years, while our galaxy itself is about 100,000 to 150,000 light-years across, from end to end.)

And that discovery revealed even more detail about what’s going on at both hotspot E and D. “This discovery that the hole is deeper than it is wide is what led us to believe that hotspot E is the primary hotspot where the jet is first hitting the surrounding gas,” Johnson said. “Then [the jet] is being deflected in such a way that we are looking down the line of sight of the jet as it is moving away from us.”

In other words, hotspot E, though dimmer, is actually where the black hole’s jet first smacks into gas in the galaxy. That jet is then deflected — from our point of view, it shoots back and away from Earth — to hotspot D, where it deposits the rest of its energy, making D appear as the larger brighter hotspot, Johnson said. The hole, she said, is carved out by the jet as it deflects backward to hotspot D.

Looking at the X-ray image again, it’s worth noting there are also two hotspots on the other side of the galaxy: A and B. “The same process could be occurring on the western side of Cygnus A, but the jet here could be moving at a closer angle to our line of sight, so we see a brightness rather than dimness. It could moving more across our line of sight than straight away from us,” Johnson said.

“Since jets play such a significant role in galaxy formation, a greater understanding of how they work is important in understanding how massive galaxies form and evolve. It also gives us insight into how jets and black holes interact with their surroundings,” Johnson said. By studying the relatively nearby Cygnus A, astronomers can get a glimpse into processes that may be occurring in faraway galaxies that we don’t have the ability to zoom in on in such great detail. It also proves that once again, looks can be deceiving — every astronomical image is a two-dimensional representation of a three-dimensional object, and sometimes those objects can be more complex than they first appear.