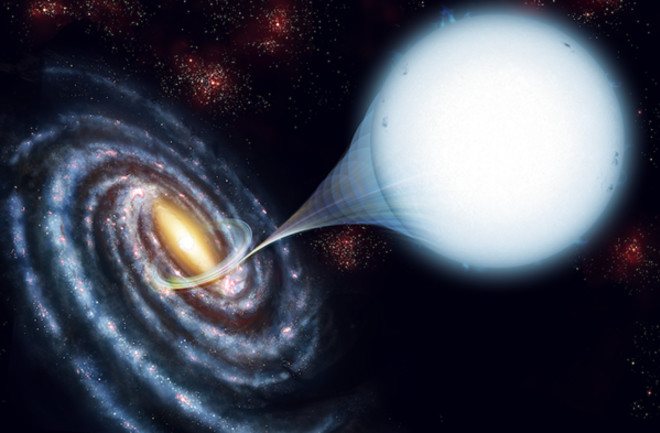 The Milky Way Galaxy contains billions of stars. Though the vast majority of these are bound to the galaxy by gravity, astronomers have found a few tens of stars that are not orbiting but instead fleeing our galaxy at extreme speeds. These hypervelocity stars have intrigued researchers for years, and now a new mysterious player has entered the game. LAMOST-HVS, the closest of these fast-moving stars to our sun, has an origin story markedly different from the way we believed these stars get their kick out of the Milky Way.

In a study led by researchers from the University of Michigan and published March 12 in the Astrophysical Journal, astronomers used data from the Magellan telescope in Chile and the European Space Agency’s Gaia satellite to wind back the clock and trace the trajectory of LAMOST-HVS, an 8.3-solar-mass star zipping away from the galaxy at more than 350 miles per second (568 kilometers per second). LAMOST-HVS is the closest hypervelocity star to the sun, and researchers estimate it was sent on its way by an event that occurred 33 million years ago. But that event, it seems, was different from the single origin astronomers have developed for how hypervelocity stars are ejected from the galaxy, suggesting there may be more than one way to kick a star out of the Milky Way.

"Scientists traced the trajectory of a massive "hyper-runaway

Scientists traced the trajectory of a massive “hyper-runaway star.” The star’s past shows it was ejected from the Milky Way’s disk, not the galactic center as previously believed. (Credit: Kohei Hattori)

Gravity is a force that pulls things together. But it can also, under the right circumstances, boost them to high speeds, sending them sailing away instead via a slingshot effect. The traditional picture of how hypervelocity stars are made begins with a binary star system. If that system passes too close to the supermassive black hole in the Milky Way’s center, which contains 4 million solar masses, the immense gravity can tear the binary apart. One star is nabbed by the black hole, while the other is shot out at incredible speeds. It takes a massive black hole to accomplish this, which is why astronomers believed the Milky Way’s central black hole was the only explanation.

Because high gravity is needed to kick a star out at such high speeds, a stellar-mass black hole left over from a supernova or a few encounters with even reasonably massive stars just won’t do it. But, the authors suggest, a massive star cluster that houses several very massive stars of at least 30 solar masses each could generate enough kick if LAMOST-HVS swung too close to them. Alternatively — and even more exotic — an encounter with an intermediate-mass black hole with about 100 solar masses would also do the trick.

Intermediate-mass black holes have been theorized for years and while some observational evidence points to their existence, they have yet to be unequivocally confirmed. They are believed, however, to form in massive star clusters such as the one that ejected LAMOST-HVS, so the idea that one may be responsible for the star’s current state isn’t impossible.

The Norma spiral arm is partly obscured from view by dust, as well as material in the galactic center. (Credit:NASA/JPL-Caltech/R. Hurt, Tobias Frei)

The Norma spiral arm is partly obscured from view by dust, as well as material in the galactic center. (Credit: NASA/JPL-Caltech/R. Hurt, Tobias Frei)

The crux of this discovery comes back to LAMOST-HVS’s point of origin, which the team traced back to a position in the Milky Way’s Norma spiral arm. But there’s no massive star cluster known at that location. This doesn’t entirely throw a wrench in their results, however — such a cluster could easily be hidden from view by dust in the Milky Way between Earth and the Norma arm, making it difficult to observe. But if the cluster can be found, the team says, it might provide additional evidence to prove the existence of intermediate-mass black holes. Additionally, if a massive cluster is to blame, it would reveal further clues about how such clusters influence the environments of the galaxies in which they reside.

Regardless of the way in which LAMOST-HVS was kicked on its current path, one thing is for sure: it wasn’t through an encounter with our galaxy’s supermassive black hole.

“This discovery dramatically changes our view on the origin of fast-moving stars,” said co-author Monica Valluri, of the University of Michigan’s Department of Astronomy, in a press release. “The fact that the trajectory of this massive fast-moving star originates in the disk rather that at the galactic center indicates that the very extreme environments needed to eject fast-moving stars can arise in places other than around supermassive black holes.”