Astronomers See and Hear the Cosmos

A gravitational wave and a flash of light open up a new field of astronomy. 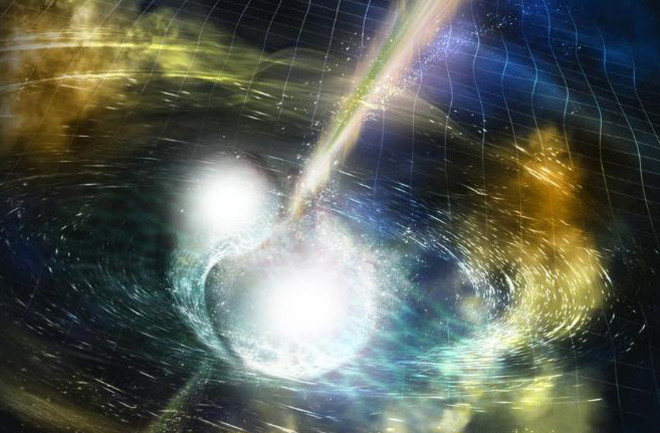 For hundreds of millions of years, two city-sized stars — each outweighing our sun — circled one another in a fatal dance. They were neutron stars, the collapsed cores left behind after giant stars explode into supernovas. Then, 130 million years ago, the dance ended. Their collision was fast and violent, likely spawning a black hole. And a shudder — a gravitational wave — rippled across the fabric of space-time. Light from the cataclysm followed seconds later.

The space-time distortion and the light reached Earth together on Aug. 17, making astronomical history. Astronomers announced the finding Oct. 16.

“It was extremely close to us, and so it was an extremely strong signal,” says LIGO scientist Jolien Creighton of the University of Wisconsin-Milwaukee.

In 2016, LIGO (short for Laser Interferometer Gravitational-Wave Observatory) announced it had detected gravitational waves for the first time, confirming Albert Einstein’s predictions in general relativity. Astronomers compared it to finally hearing the cosmos. But the real breakthroughs would come from hearing and seeing the cosmos simultaneously, or so-called “multi-messenger astronomy.” That’s now happened.

Astronomers captured the merging of neutron stars in various types of light, including ultraviolet, infrared and radio waves (above), as well as via gravitational waves — a first. | Robert Hurt (Caltech/IPAC), Mansi Kasliwal (Caltech), Gregg Hallinan (Caltech), Phil Evans (NASA) and the GROWTH collaboration

This one event produced dozens of research papers boasting thousands of scientists as co-authors. And it uncorked a jug of other scientific feats, like a new direct measurement of the expansion of our universe, and the best evidence yet that gravitons — gravity-carrying particles — have no mass, just like photons (light particles). Astronomers even caught the collision’s chemical fingerprints, revealing the creation of 10 to 100 Earths’ worth of gold and other heavy elements, ending decades of debate on their cosmic origins.

“We’ve created a new field of astronomy,” says Ryan Foley of the University of California, Santa Cruz, who led the optical discovery team. “We’ve been walking around for all of humanity being able to see the universe but not being able to hear it. Now we get both.”

He adds: “It’s even hard to predict where this field will go, but I can tell you now it’s going to be exceptional.”