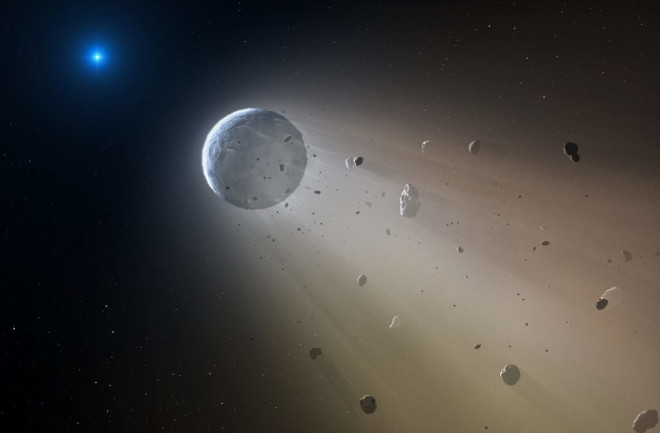 The dense cores of past planets might survive a star’s expansion period into its white dwarf phase. (Credit: CfA/Mark A. Garlick)

In five or six billion years, our sun will expand into a red giant star hundreds of times larger than it is now. It will envelop Mercury and Venus, and possibly Earth as well, and then slowly puff away its outer layers. The hot, dense core left behind is called a white dwarf. And it will glow for billions of years.

It’s an open question what happens to the planets left behind. Scientists can perform simulations for our own solar system, but there are many possibilities. Several planets may remain (though likely stripped of their atmospheres). Or all the planets might be flung out of our solar system thanks to changing gravitational interactions. And stars like our sun are quite common, meaning many star and planet systems in the galaxy will – or already have – undergone such tumult.

Astronomers Dimitri Veras and Alexander Wolszczan (who found the first exoplanet in 1990) are proposing to look for these zombie systems. While the white dwarfs will be dim and any remaining planets tiny, it’s possible for such a defunct planet-star system to generate a magnetic field and radio emissions that researchers could detect. Astronomers haven’t found such exoplanet systems yet, but Jupiter and its moon Io have this kind of relationship in our solar system, so they know it’s possible.

The researchers decided to investigate how likely it would be to find such systems, and found that many planet cores could survive between 100 million and a billion years, making them common enough to be worth searching for.

The authors published their work in the September issue of Monthly Notices of the Royal Astronomical Society.

As telescopes grow more advanced, astronomers have become more adept at finding not just white dwarf systems, but also the detritus that sometimes surrounds them. Often these objects – which might be planets, asteroids, comets, or other space junk – are noticed only after they fall into the white dwarf, contaminating the star’s otherwise pure outer layers. But scientists have also spotted rings of debris and even a few small planets orbiting white dwarf stars.

Many planet systems are found by the effects an orbiting planet has on its star’s light, as viewed by earthly telescopes. In this case, astronomers considered the possibility that the dense, conducting core of a planet orbiting a white dwarf with a magnetic field could create a circuit that emits radio waves.

Again, no such system has been found yet, but astronomers know that Jupiter and its moon Io produce these signals, and that planets do still orbit some white dwarfs. Astronomers hypothesize that these worlds are the remnants of the star’s original planetary system, much diminished but still present, even after the chaos of the dying star.

By examining the forces at work in dying planetary systems, the researchers found that it would be normal for planets to survive for hundreds of millions of years after the star entered its white dwarf phase. That survival depends on many details about the star and the planet itself, but most on factors like the starting distance between the planet and star and the star’s magnetic field strength.

“There is a sweet spot for detecting these planetary cores: a core too close to the white dwarf would be destroyed by tidal forces, and a core too far away would not be detectable,” Veras, the lead author, said in a press release. “Also, if the magnetic field is too strong, it would push the core into the white dwarf, destroying it. Hence, we should only look for planets around those white dwarfs with weaker magnetic fields at a separation between about 3 solar radii and the Mercury-Sun distance.”

The good news is that astronomers are getting better and better at discovering white dwarf systems, so if such radio signals are out there, it shouldn’t take too long to start finding them.