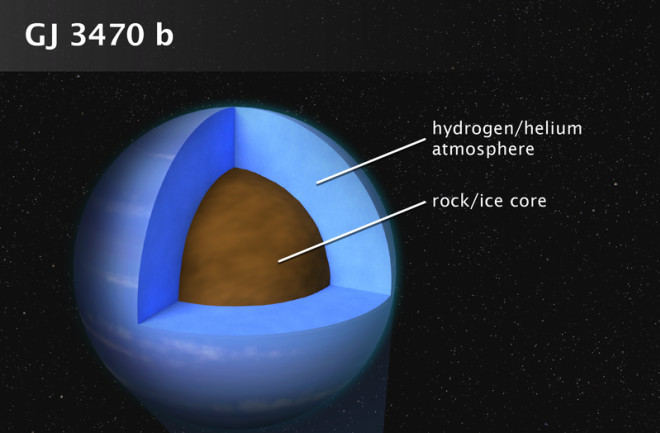 The planet GJ 3470 b has a rocky core and a thick hydrogen and helium atmosphere, and circles quite close to its dim red star. (Credit: NASA/ESA/L. Hustak)

The Kepler Space Telescope revealed planets outside our solar system by the thousands. With this wave of discoveries, astronomers realized something peculiar: the most common type of planet in the galaxy is one our solar system doesn’t have. It’s a planet between the size of Earth and Neptune, known either as a super-Earth or a sub-Neptune.

Now, for the first time, astronomers using the Hubble and Spitzer space telescopes have managed to peer into the atmosphere of one of these mysterious planets. They looked at one called GJ 3470 b to reveal what gases swirl around it. They found a surprisingly light atmosphere, built almost entirely out of hydrogen and helium, more like the makeup of a star than a planet.

The researchers, led by Björn Benneke of the University of Montreal, Canada, published their findings July 1 in Nature Astronomy.

GJ 3470 b is unlike any planet in our solar system. It weighs 12.6 times the mass of Earth — still far below Neptune, which is 17 times Earth’s mass. It also takes only three days to circle its star, which is a dim red dwarf, much cooler than our own Sun.

Super-Earths and sub-Neptunes can cover a wide range of planet types, from massive rocky worlds a few times Earth’s size to relatively tiny gas planets, with room in the middle for planets made of ice or water. Many of them have deep atmospheres of hydrogen and helium, more like the giant planets in our solar system. By contrast, Earth’s atmosphere is quite thin, and made of heavier components, like nitrogen and oxygen. For many super-Earths, the added bulk comes mostly from their large atmospheres, while the rocky component might only be a little larger than Earth.

“We expected to find an atmosphere strongly enriched in heavier elements like oxygen and carbon that create abundant water vapor and methane gas,” said Benneke in a statement. “Instead, we found an atmosphere that is so poor in heavy elements that its composition resembles the hydrogen- and helium-rich composition of the Sun.”

This makes astronomers second-guess how they think such a planet might form. Usually, when astronomers see a planet orbiting so close to its star, they assume it actually formed farther away, in a quieter zone of the solar system. That would have kept it away from the heat and stellar wind of a young star that blows very light elements like hydrogen and helium away before they could stick in a planet’s gravity.

After the planet had formed, gravitational interactions or drag from gas particles could send a planet spiraling inward, where astronomers might spy it on a closer orbit.

But in this case, the simple atmosphere makes astronomers think that perhaps GJ 3470 b formed quite close to its star, inside a boundary called the frost line where heavier materials like oxygen and carbon reside. There, the planet could have formed its solid, rocky core, but picked up only light gases for its atmosphere.

The Spitzer Space Telescope is retiring, but NASA’s upcoming James Webb Space Telescope will be able to see even more detail. Located only 100 light-years away and so close to its host star, GJ 3470 b should be a prime candidate for JWST follow-up work.