Astronomers May Have Spotted Another Neutron Star Merger 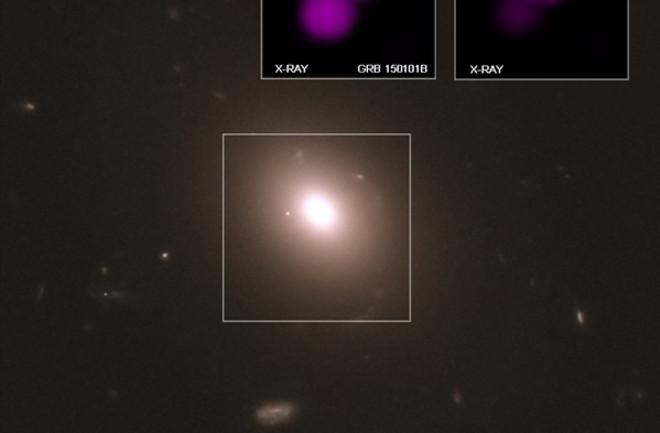 In 2017, gravitational waves and light were observed coming from the merger of a pair of neutron stars. The discovery proved that gravitational wave sources could also be viewed at visible, X-ray, and even gamma-ray wavelengths, but has remained the only such event observed to date. Now, researchers have identified a “cosmic look-alike” — an event they believe came from the same type of system as the one that produced the gravitational waves.

Such a discovery would double the number of known events of this type. “It’s a big step to go from one detected object to two,” said Eleonora Troja of NASA’s Goddard Space Flight Center, and lead author of the study published October 16 in Nature Communications, in a press release. The paper focuses on a gamma-ray burst, called GRB 150101B, seen by NASA’s Neil Gehrels Swift Observatory in 2015. Troja’s team followed up using NASA’s Chandra X-ray Observatory, Fermi Gamma-ray Space Telescope, Hubble Space Telescope, and the Discovery Channel Telescope to determine that GRB 150101B appears similar to the 2017 gravitational wave event GW170817, which was produced by a kilonova that occurred when two inspiralling neutron stars collided. Shortly after that event’s gravitational waves reached Earth, astronomers also spotted a gamma-ray burst and light at several wavelengths associated with the merger, proving that neutron star mergers are capable of producing all these signals.

During a neutron star merger, astronomers believe a narrow jet of high-energy particles is created, which is responsible for the short burst of gamma rays spotted from Earth. In the case of both GW170817 and GRB 150101B, that jet was likely viewed off-axis, meaning it was not directly pointed toward our planet, because the bursts were fainter and shorter lived than expected. Both events also generated bright blue light at visible wavelengths (the kilonova) and lasting X-ray emission. The two even came from host galaxies that look similar: old elliptical galaxies with no newly forming stars.

Co-author Geoffrey Ryan of the University of Maryland (UMD) and the Joint Space-Science Institute, who called the events “cosmic look-alikes,” said, “They look the same, act the same and come from similar neighborhoods, so the simplest explanation is that they are from the same family of objects.”

However, for all their similarities, GW170817 and GRB 150101B do have some key differences. GW170817 was also detected via gravitational waves, while GRB 150101B was not. Without this key information, astronomers cannot be sure that GRB 150101B resulted from the merger of two neutron stars; it may have been the merger of a black hole and a neutron star instead. Additionally, GRB 150101B’s host galaxy is much farther than GW170817’s — the former lies 1.7 billion light-years away, while the latter is only 130 million light-years distant. But because GRB 150101B occurred so far away, the team says, even if LIGO had been in operation when it was seen, the observatory would likely not have detected gravitational waves.

The first step toward better understanding these events is finding more of them. And, the team says, it’s possible astronomers have seen others, but simply weren’t able to identify them because they lacked data in other wavelengths. Though astronomers have detected many gamma-ray bursts, these events can be difficult to pinpoint exactly on the sky without data from X-ray or optical observations. As faster follow-up observation with multiple telescopes becomes more the rule than the exception, astronomers could soon double their database of neutron star mergers again.

But it’s important to keep the initial differences between the only two known events in mind. GW170817 and GRB 150101B might not be as similar as they seem, and that could be important. “If the next such observation reveals a merger between a neutron star and a black hole, that would be truly groundbreaking,” said co-author Alexander Kutyrev, who is also associated with both UMD and Goddard Space Flight Center. “Our latest observations give us renewed hope that we’ll see such an event before too long.”

One thing is for sure: As detectors and detection techniques improve, astronomers are sure to see more astronomical events at many wavelengths, providing an ever-clearer picture of how our universe works. The better able astronomers are to identify the types of emission (such as light or gravitational waves) associated with an event, the more of them they will spot using many different techniques. “We’ve been able identify this kilonova without gravitational wave data,” Troja said, “so maybe in the future, we’ll even be able to do this without directly observing a gamma-ray burst.”