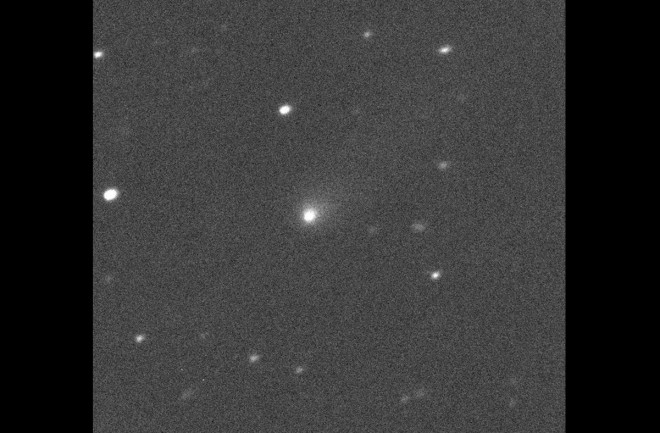 A newly discovered comet has astronomers excited. Formally named C/2019 Q4 (Borisov), the object appears to have come from outside our solar system. If confirmed, that would make it the second known interstellar visitor to our solar system, after the space rock ʻOumuamua.

The potential interstellar comet, which so far is only a fuzzy blip, was first seen on August 30 by observer Gennady Borisov. Ever since then, astronomers around the world have been tracking it and mapping its trajectory to determine its origin. The preliminary data suggests that the object could have originated outside our solar system.

While ‘Oumuamua wasn’t seen until it was on its way out of the solar system, C/2019 Q4 is still on its way in — and should remain visible for a year. With current orbit calculations, C/2019 Q4 is expected to reach its closest approach to the Sun in December 2019, providing astronomers with time to observe it more closely. The comet will likely come within 2 AU of the Sun, which is outside the orbit of Mars. Though currently around a brightness magnitude around 18 —too dim to be seen with a small telescope  — the comet is expected to brighten to around 15th magnitude.

In order to determine if an object started its life outside of the solar system, astronomers plot its orbit to find the arc and speed at which the object travels. In order to get the most accurate trajectory, astronomers need to have multiple days, ideally weeks, between measurements. Then, using mathematical models, astronomers fit the measurements to an orbit, which lets them see where the object came from.

Early calculations suggest that C/2019 Q4 has a hyperbolic orbit — meaning one that that has the ability to escape the Sun’s gravitational pull. The measurements so far suggest C/2019 Q4 is interstellar, but not all objects confirmed to have a hyperbolic orbit are interstellar visitors. There are over hundreds of known comets with hyperbolic orbits that have originated in the Oort Cloud, an icy group of leftover material on the outer edge of the solar system. Occasionally, objects from the cloud are dislodged and sent on a one-time trip into the inner solar system where they are sling-shotted by the Sun and out into interplanetary space.

Comet C/2019 Q4 could get as close as 190 million miles (300 million kilometers) from Earth, allowing astronomers the opportunity to better study it. (Credit: NASA/JPL-Caltech)

Initially, scientists thought C/2019 Q4 could be one of these objects, but with more observations, it’s looking more and more like C/2019 Q4 is interstellar.

“Last Sunday it was pretty on the fence whether it was just going to turn out to be an Oort Cloud comet,” said Michele Bannister, an astronomer at Queen’s University Belfast in Ireland. “I think at this point … we’re pretty confident. I think it’s okay to say it’s interstellar.”

The first interstellar visitor, now called ‘Oumuamua, was discovered in 2017 when it streaked past Earth as it started to fly out of our solar system. Astronomers had long anticipated finding interstellar comets.

But ‘Oumuamua had a uniquely enlongated cigar shape that had never been seen before, which indicated that perhaps the star around which it originated had different conditions to the Sun’s. Similariliy, observations of C/2019 Q4, if intestellar, could help astronomers continue to study other stellar systems. And since it’s still inbound, there will be plenty of opportunity to study it in the months to come.

“So the question we’ll be wanting to answer is: what’s the composition of the coma — the fuzzy bit around the comet core. Is it like comets that we see in the solar system, or is it completely different?” Bannister said.

While observations of interstellar objects are incredibly rare, it is estimated that several such objects pass within Earth’s orbit every year undetected. Another 10,000 likely pass within Neptune’s orbit annually.