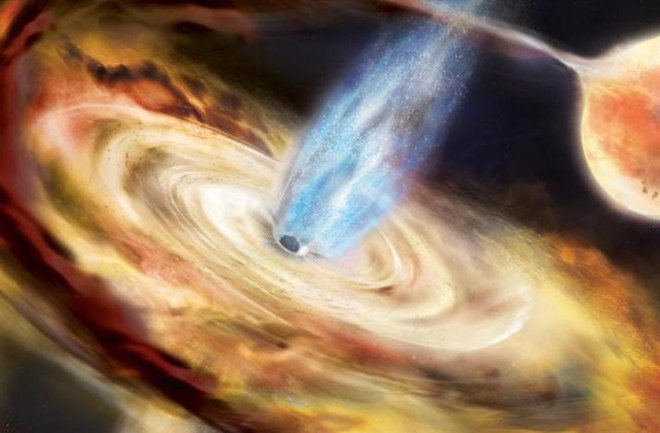 Black holes pepper our universe, but like their name implies, most are invisible — until something happens to change that. That something is often material flowing into the black hole. And in March 2018, one such previously invisible black hole flared to life when a flood of matter fell inward, allowing astronomers to spot and track the event, ultimately mapping out the region close to a black hole in finer detail than ever before.

That work, published January 9 in Nature, was led by Erin Kara of the University of Maryland and NASA’s Goddard Space Flight Center. Kara also presented the results at a press conference the same day at the 233rd meeting of the American Astronomical Society in Seattle. Using NASA’s Neutron star Interior Composition Explorer (NICER) aboard the International Space Station (ISS), the team watched the stellar-mass black hole (designated MAXI J1820+070, or J1820 for short), which flared to life March 11, every day for months. In that time, they used light echoes, which occur when light from near the black hole is absorbed by the accretion disk farther out and then emitted again in a sort of “echo,” to map out the region close to the black hole and watch how that it changed over time.

“Similar to how bats use echolocation to map out a dark cave that they can’t see, we are using these light echoes to put constraints on what it must look like around this black hole that we cannot resolve spatially with our telescopes,” Kara explained in the press conference.

While many black holes are simply sitting calmly in space without nearby material to consume, some are in binary systems where one star has become a black hole, while the companion is at an earlier stage in its life. This is the case for J1820 — the black hole is pulling material off a star, which forms a swirling disk of material that heats up as it falls inward toward the event horizon and disappears. The accretion disk is relatively flat and thin, as its name implies, shining at a temperature of about 18 million degrees Fahrenheit (10 million degrees Celsius). Closer to the black hole lies a spherical “corona” of even hotter electrons, protons, and positrons at almost 2 billion F (1 billion C).

Outbursts such as the one that allowed the team to spot J1820 occur when an instability in the disk, such as a clump of material, causes a sudden rush of matter toward the black hole, making the system to flare hotter and brighter. The first instrument to find the flaring black hole was the Japan Aerospace Exploration Agency’s Monitor of All-sky X-ray Image (MAXI), which is also installed on the ISS. Once MAXI spotted the event, NICER swung into place to pinpoint its location and study the X-rays streaming from the black hole in greater detail.

NICER “has this incredibly fast, high time resolution,” Kara said, which means it takes separate measurements quickly so that astronomers can watch what’s happening in greater detail. That greater detail meant “we were able to measure shorter light echoes than had ever been seen before in a stellar-mass black hole system. And that means we’re probing closer to the black hole with these light echoes than ever before possible,” Kara said.

But something else was happening. “As we watched the system over several weeks, we saw that the light echoes got closer and closer together. That was indicating that something in the system was getting smaller – so either the accretion disk coming inwards, or the corona shrinking,” Kara said.

“We noticed that the most gravitationally redshifted emission – the emission coming from the innermost regions – the amount of that emission did not change at all. So that suggested to us that the disk itself is close to the central black hole and does not evolve over time. But because the light echoes got shorter and shorter, closer and closer together, that must mean that the corona was shrinking,” she said.

Her team estimated that over several weeks, “the corona shrinks from something like 100 miles [160 kilometers] to only 10 [16 km],” Kara said.

“This is the first time that we’ve seen this kind of evidence that it’s the corona shrinking during this particular phase of outburst evolution,” study co-author Jack Steiner at the Massachusetts Institute of Technology’s Kavli Institute for Astrophysics and Space Research said in a press release. “The corona is still pretty mysterious, and we still have a loose understanding of what it is. But we now have evidence that the thing that’s evolving in the system is the structure of the corona itself.”

“In stellar-mass black holes [these outbursts] evolve over timescales of several weeks to months. So we can watch this evolution happening in real time and we find now that it’s the corona that’s driving that evolution,” Kara said. But in supermassive black holes, she added, such outbursts occur over billions of years. By scaling up what’s going on around smaller black holes over shorter time periods, she explained, astronomers can learn more about how material falls in and causes changes in the region around supermassive black holes on much larger scales. That will, in turn, allow astronomers to better understand how these behemoths affect their local environment, which in turn affects the evolution of the galaxy around them.

“These stellar-mass black holes are a great analogue for studying the evolution of the corona and the accretion geometry in real time,” she said.