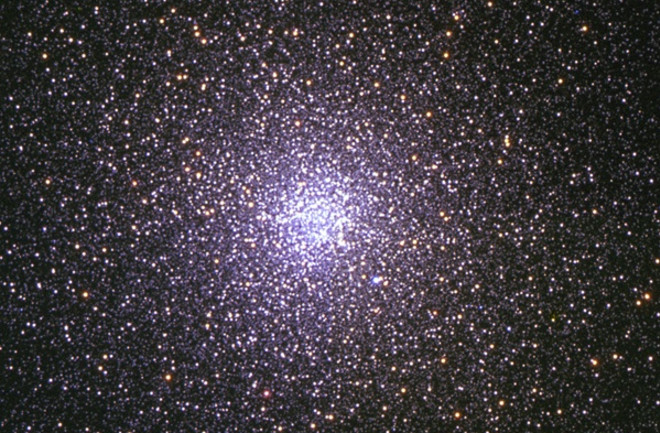 Globular cluster 47 based on data from FORS1. (Credit: ESO) Some black holes are small. Some black holes are giant. But oddly enough, in the cosmic fight between innocent passing stars and voracious black holes, scientists have never found a mid-sized black hole. Until now. The star cluster 47 Tucanae, located about 13,000 to 16,000 light years from Earth, is a dense ball of stars. Hundreds of thousands of stars compacted into a 120 light-year span give off gamma rays and X-rays and more energetic events, but to date, no black holes had been found there. The center seemed ripe for opportunities to find one, but a lack of tidal disruption events and a jumble of stars hard to sift through obscured finding any lurking black holes there. The Harvard-Smithsonian Center for Astrophysics turned to two tactics to find the black hole instead. First, they observed the motion of the stars in aggregate, and compared the rotation rate to what would happen if a black hole were present. Secondly, they observed the position of pulsars in the globular cluster. The research was published Tuesday in Nature. Black holes are the densest objects in the universe. But neutron stars (which include pulsars) are a close second, as both can result from similar events in which a giant star goes supernova and its dense stellar core collapses (though a few other mechanisms can create black holes.) If the pulsars were the biggest objects in the globular cluster, they’d be nearer to the core and act as a chief gravitational attractor. But instead, pulsars are scattered across the cluster rather than congregating in the center of the cluster. This all suggests that a black hole of 2,200 solar masses is lying at the center of 47 Tucanae. Until now, though, astronomers have typically only found black holes of below 100 solar masses or above 10,000, the latter of which are the behemoths that power galaxies. These intermediate-mass black holes are believed to be seeds of supermassive black holes. As black holes feast, they gain mass. The intermediate-mass black holes may form from several stars in a dense cluster collapsing, with the resulting black holes merging and creating a bigger black hole. They could also be black holes that have accumulated mass over time — and indeed, 47 Tucanae is 12 billion years old, giving plenty of time to slurp up matter. There is also a scenario under which, shortly after the Big Bang, certain areas of the expanding universe were so dense they formed black holes shortly after the event. Finding more mid-range black holes can be hard. Black holes, especially larger ones, typically clean their general area of debris. But if an unfortunate star happens to cross paths with one, the resulting event could be detected by astronomers, allowing them to see an intermediate-mass black hole in action. This article originally appeared on Astronomy.com.