Astronomers Get A Direct, Detailed Look At An Exoplanet's Atmosphere 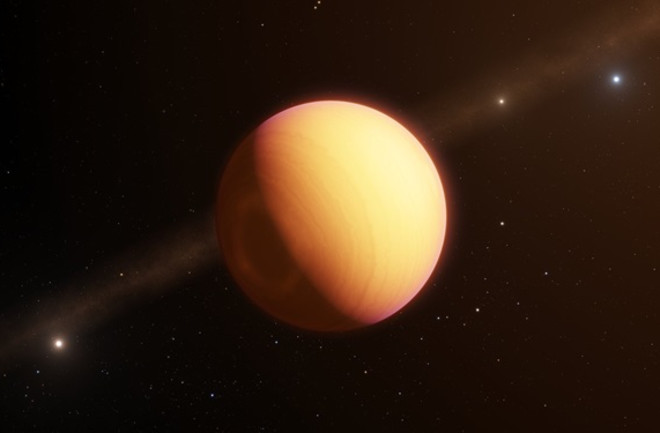 This artist's concept shows the planet HR8799e - a hot, young planet with carbon monoxide skies and storm clouds of iron and silicate dust. (Credit: ESO/L. Calçada) Most exoplanet observations are indirect, inferring the existence and characteristics of a planet by watching the light or motion of its host star. But direct exoplanet observations have begun, and the GRAVITY instrument on the Very Large Telescope Interferometer in Cerro Paranal, Chile, is leading the way. In a paper published March 27 in Astronomy & Astrophysics, the GRAVITY Collaboration presents a peek at the swirling, stormy atmosphere of the exoplanet HR8799e using optical interferometry, which combines light from several telescopes to create a single “virtual” telescope with a bigger size. It is the first time an exoplanet has been studied with this technique, offering a picture 10 times more detailed than previous observations.

HR8799e circles a star that lies about 129 light-years from Earth. It is a young planet only about 30 million years old, and based on the new observations, a hot, inhospitable world. With a temperature of about 1,800 degrees Fahrenheit (1,000 degrees Celsius), the world is an inhospitable super-Jupiter with a radius about the same as Jupiter’s but a mass 10 times greater. What’s more, thanks to the detailed look at the planet, the team determined the composition of its atmosphere and found it’s largely made of carbon monoxide, scattered with clouds of iron and silicate dust. But the fact that the planet has so much carbon monoxide is unexpected. The team’s explanation for the unusual chemistry is that the world must be a stormy one, with high winds that keep carbon monoxide and hydrogen apart, so that methane — which they expected to see in large amounts — is not formed.

The four Unit Telescopes that make up the Very Large Telescope Interferometer. Superimposed on this photo are the tunnels through which the telescopes' light is sent, to be combined into a single, final, detailed image. (Credit: ESO)

“Our observations suggest a ball of gas illuminated from the interior, with rays of warm light swirling through stormy patches of dark clouds,” said team leader Sylvestre Lacour, of the Observatoire de Paris – PSL and the Max Planck Institute for Extraterrestrial Physics, in a press release. Convection in the planet’s atmosphere, he says, causes iron and silicates to rain from the clouds into the planet’s interior. “This paints a picture of a dynamic atmosphere of a giant exoplanet at birth, undergoing complex physical and chemical processes,” he said. [This post originally appeared on Astronomy.com]