Astronomers hope to explain how galaxies like this one can grow magnetic fields that stretch for thousands of light-years — and what affect they have on galactic evolution. 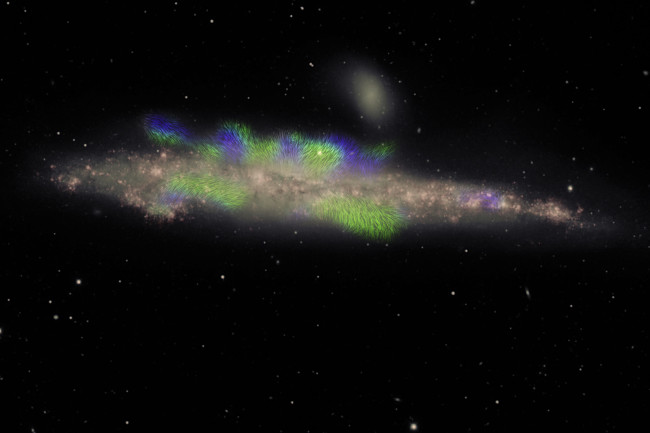 In galaxies, magnetic fields can extend at least 1,000 light-years. And, thanks to some of today’s most powerful radio telescopes, astronomers are trying to understand how these vast fields were created and how they affect the galaxies they’re in.

Now, a team of astronomers has managed to make out the complex 3D structure of magnetic fields stretching out from the disk of a spiral galaxy called NGC 4631, or the “Whale Galaxy,” millions of light-years away. The team found that the fields have a complex pattern laid out in alternating directions — something never before seen in a galaxy. So, as the researchers study more galaxies with their techniques, they hope to untangle how these fields shape the evolution of galaxies.

The researchers describe their findings in a recent paper in the journal Astronomy & Astrophysics and discuss potential explanations in Monthly Notices of the Royal Astronomical Society.

The finding came out of a project to study radio signals from spiral galaxies that are tilted so we see them edge-on from Earth’s point of view. For these galaxies, astronomers can more easily separate what’s happening outside of the galaxies’ disks, in the gas-filled “haloes” that surround them.

Using observations from a radio telescope in New Mexico called the Very Large Array, the astronomers measured properties of the radio emission coming from the halo of the galaxy NGC 4631. They’d known from past observations that there were large-scale magnetic fields that extended out of the disk into the halo of this galaxy.

But with the new data, they could see the directions these fields pointed across multiple dimensions. Their measurements revealed that the fields pointed alternately in and out of the galaxy’s disk along the flat view of the sky from Earth’s point of view. Another measurement showed that the fields also alternated in pointing toward and away from Earth along our line of sight to the galaxy.

Now the astronomers are developing an overall picture of what the magnetic fields are doing. Though the team hasn’t fully reached a consensus, they have theories that involve spiraling magnetic fields, related to the spiraling arms in the galaxy’s disk, to explain the complex patterns they see.

The researchers say that the patterns may be evidence of how the galaxy has created those magnetic fields through the motion of charged material called plasma.

“[Studying] magnetic fields is a frontier,” said Jayanne English, an astronomer at the University of Manitoba in Canada and a member of the team. “We want to know why they're there, how they're there, and then what role they play in galaxy formation, structure and evolution.”