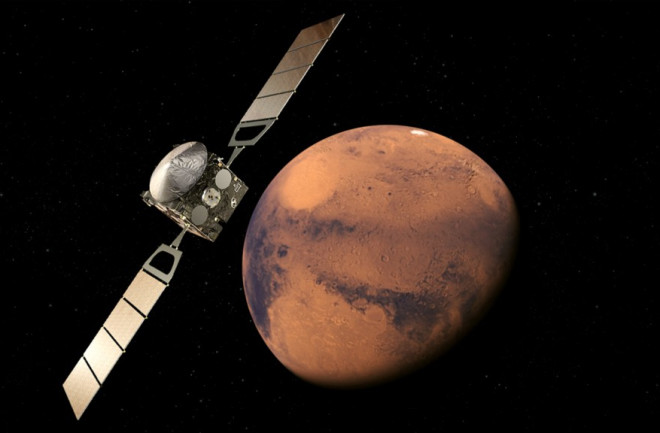 ESA’s Mars Express confirmed from orbit the presence of methane observed one day earlier by the Curiosity rover on the ground. (Credit: ESA) Researchers have independently confirmed, for the first time, the detection of methane on Mars. For fifteen years, various research groups have claimed to see traces of methane in Mars’ atmosphere. Intriguingly, these often appear as puffs of gas that appear and disappear over short timescales. Groups have hotly debated whether the methane might be evidence of life, or merely geologic processes. Other researchers have argued whether the methane truly exists at all, or if the detections are merely errors. Now, a group using data from the European Space Agency’s Mars Express spacecraft says they identified methane above Gale Crater on June 16, 2013, just one day after NASA’s Curiosity rover noticed a methane spike from the ground in Gale Crater. This marks the first confirmed finding of an important substance in the hunt for life on the Red Planet.

Researchers, led by Marco Giuranna from the Istituto Nazionale di Astrofisica in Rome, used an instrument called the Planetary Fourier Spectrometer (PFS) to look at the area above Gale Crater in the middle of June, 2013. This was when the Curiosity rover reported methane from its location within Gale Crater. In the days before Curiosity’s observation, Mars Express saw no methane. But in the orbits closest in time to Curiosity’s discovery, Mars Express did observe a similar spike in methane, over the same region of the Red Planet. Within a few days, the signal had disappeared for both Curiosity and Mars Express. Methane detections have been claimed for years on the Red Planet. But either the signals were weak enough to be unreliable, or skeptical researchers could point to possible contamination sources in the data. The sudden appearance and disappearance obviously made it harder to confirm the findings, but it also led astronomers down interesting paths of what might cause the methane to bloom and die. Could biological processes be at work? On Earth, the vast majority of methane is produced by living creatures, from microbes to humans. An underground Martian ecosystem that puffs out pockets of methane is extremely alluring. But geologic processes can also produce methane just from the combination of sunlight and heat on certain kinds of rocks. That may still be interesting for geologists, but it's much less exciting than discovering alien life. The new research, published April 1 in Nature Geoscience, doesn’t speculate on what might cause the methane. But they do put a target on the map of where the methane might have originated. Because the methane appeared and disappeared so quickly, it can’t have been too big of a cloud. Therefore it must have originated near where Curiosity sniffed the gas out. The researchers looked at a map of Curiosity’s surroundings, and picked out areas similar to common methane sources on Earth: a fault, spring, or vent that might provide access to Mars’ underworld. They identify an area called Aeolis Mensae and its surroundings as the most likely source of the methane. While Mars’ methane mystery may not be solved yet, researchers now have a map and proof that at least their hunt isn’t simply a wild goose chase.