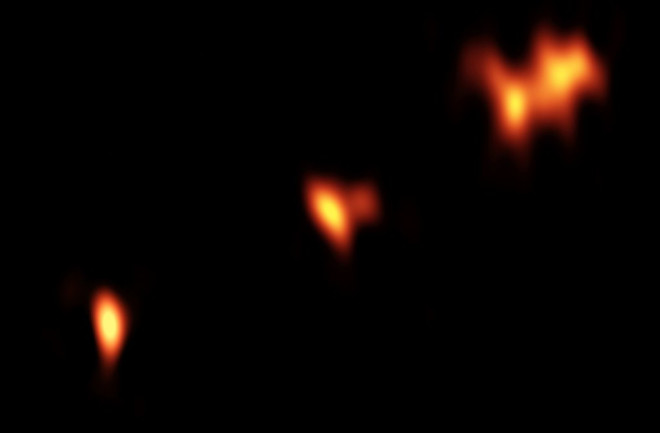 The light in this image emanates from a supermassive black hole at the center of a galaxy 13 billion light-years away.(Credit: Momjian, et al.; B. Saxton (NRAO/AUI/NSF)) The early universe is a mystery. It's quite literally surrounded by a veil that obscures its distant, early light. But a new glimmer through that void could give us a glimpse into this mysterious era. Two papers released in the Astrophysical Journal (first paper, second paper) detail the discovery of a quasar dubbed PSO J352.4034-15.3373, or P352-15 for short. Quasars are the active centers of large galaxies where supermassive black holes shoot out jets of gas. The image is faint, but shows three distinct regions spreading across some 5,000 light years. Our universe is 13.8 billion years old; this quasar is 13 billion years old. In the intervening time, our universe was filled with neutral hydrogen - one positively charged proton mated to a negatively charged electron - which appeared like a universe-spanning cloud as it rapidly expanded. This made it hard to see very far across the universe. The first stars eventually combined into the first galaxies. These galaxies typically were a bit stranger and smaller than our modern day galaxies. But P352-15, much like our modern galaxies, has a supermassive black hole at the center, entrapping the gas. It was these first supermassive black holes that “sparked” the neutral hydrogen and reionized it, giving us the clear skies we see today in a time known as the Epoch of Reionization. The researchers from the National Radio Astronomical Observatory (NRAO), using data from the Very Large Array in New Mexico, have competing ideas on why their image of P352-15 has three distinct components. The first component is the actual quasar, while the other two spots are the massive jets shooting out of an active galactic center. In this case, it’s a one-sided jet. In the other explanation, the center object is the quasar, and the outliers are parts of a two-sided jet. “This quasar may be the most distant object in which we could measure the speed of such a jet,” NRAO astronomer Emmanuel Momjian said in a press release. P352-15 isn’t the earliest galaxy we’ve ever seen; that record goes to GN-z11, which is 13.4 billion light years away. A light year corresponds to how old the light we’re seeing is; the sun itself is eight light minutes away, meaning by the time we’re not-looking-at-it in the sky, we’re seeing eight minute old light; the closest star, Proxima Centauri is actually showing up in the sky as it was 4.2 years ago, etc. Thus GN-z11 is 13.4 billion years old, a good 400 million years older than P352-15. But P352-15 is the brightest, which makes it one of the best places to study the early universe. The researchers believe it comes from the tail end of the Epoch of Reionization, helping build a more coherent picture of how the first galaxies altered the universe forever — and helped us to actually see stars in the night sky.