The new find also means old galaxies might yet be capable of making new stars, despite their age. 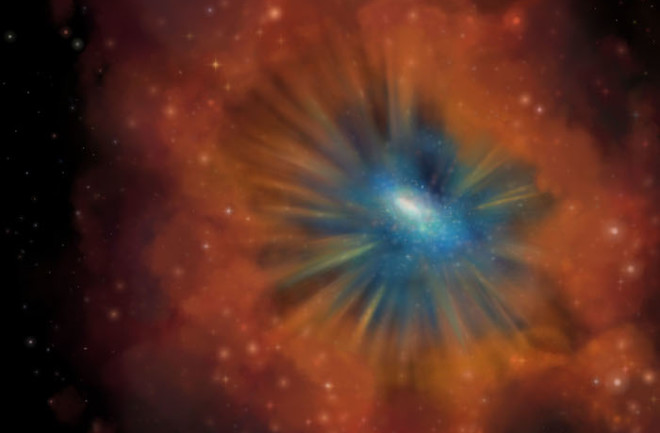 An artist depicts the powerful quasar blowing away material immediately around it, but with the outer reaches of the galaxy still containing red dust and gas. (Credit: Michelle Vigeant)

Quasars are supermassive black holes actively gobbling material from the galaxy around them. While black holes are known for pulling material in, the turbulent swirl of that whirlpool often also flings material and radiation out at high energies, enabling quasars to be seen from across the universe. They are some of the brightest objects astronomers know. But a quasar can be bad news for its host galaxy. To form stars, a galaxy needs reservoirs of cold gas that can clump together, not gas that’s being violently heated and swept away by a raging black hole.

So galaxies containing quasars are thought to be at the end of their productive lives, no longer capable of forming stars. But Allison Kirkpatrick, from the University of Kansas, recently revealed a whole set of galaxies that contain both violent quasars and cold pools of gas — meaning they might yet be capable of making new stars in their old age.

Kirkpatrick presented her findings of these “cold quasars” June 12 in St. Louis at the 234th meeting of the American Astronomical Society, a professional gathering of astronomers from around the world.

Kirkpatrick looked at data from the Sloan Digital Sky Survey, a massive investigation of the entire sky at various wavelengths, picking out all the quasars in one particular region. She then matched those quasars to ones found by both the XMM-Newton X-Ray Space Telescope and the Herschel Space Observatory, which looks at the sky in infrared light. X-rays are high-energy radiation, and a good marker of active black holes. Infrared, on the other end, is a lower-energy type of radiation emitted by glowing gas and dust.

It’s common to find quasars enshrouded in a cloud of dust and gas — researchers think this is an intermediate phase, when the quasar has turned on but hasn’t yet had time to blow away the dust and gas around it. But because these quasars are surrounded by extra material that absorbs much of the energy from the quasar itself, they show up as reddish, obscured objects.

What Kirkpatrick found are bright blue luminous quasars that nonetheless have cold gas signatures as well. That implies that they’ve blown away the dust and gas immediately around them, but not entirely out of the galaxy.

Kirkpatrick theorizes that this is another intermediate phase, even shorter than the red, obscured phase. Lasting perhaps only 10 million years — the blink of an eye in the lifespan of a galaxy — it could be that the reason these cold quasars appear rare is that they simply don’t stay in this phase very long. But Kirkpatrick isn’t sure yet if this is a stage most or all galaxies move through, or if only certain galaxies will ever appear as cold quasars.

To do that, she’ll have to do an even wider search, netting yet more of these new cold quasars. Perhaps soon, we’ll have an answer.