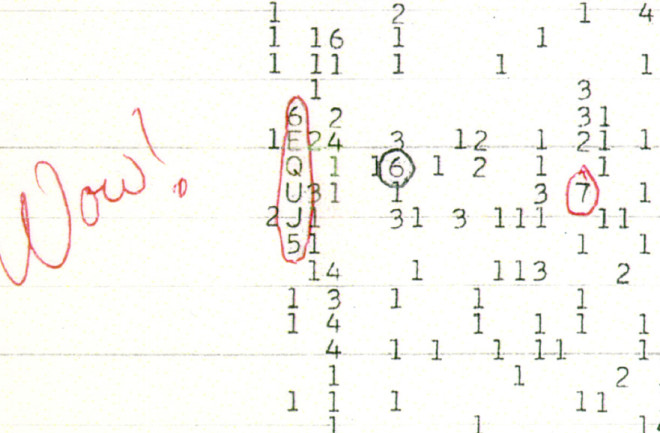 (Credit: Wikimedia Commons) For 72 seconds in 1977, the Big Ear radio telescope recorded a powerful signal streaming from the area of globular cluster M55 in Sagittarius. To Ohio State astronomer Jerry Ehman, a SETI volunteer at the time, it seemed like the exact kind of alien message he’d been searching for. Its frequency near the hydrogen line matched a strong range that extraterrestrials might use to communicate over the vast reaches of space. Ehman circled the signal on a printout and scrawled “Wow!”

Despite many searches, the so-called Wow! signal was never observed again. In the intervening decades, astronomers have ruled out Earthly-origins like a passing satellite, or even nearby asteroids or planets. The lasting unsolved mystery has provided decades of fodder for science fiction writers and late-night alien TV shows. But an astronomer at Florida’s St. Petersburg College, Antonio Paris, came up with a potential solution earlier this year that doesn’t require aliens. At the time of the Wow! signal, two Sun-orbiting comets — 266P/Christensen and P/2008 Y2 (Gibbs) — were in the same area of sky. Paris believes these dirty snowballs and their hydrogen clouds could be prime suspects.

Luckily for him, Comet 266P/Christensen passes through the same region on January 25, 2017. And on January 07, 2018, comet P/2008 Y2 (Gibbs) will do the same. Paris hopes to recreate the Wow! signal by aiming a dedicated radio telescope at the region. But his team at the Center for Planetary Science is a little short of cash. They’ve launched a GoFundMe page to help raise the needed funds to purchase and install a 5-meter radio telescope. So far, Paris raised $1,300 of his $12,000 goal. To learn more about the science, you can read their journal article published in the Washington Academy of Sciences, or pitch in funds through the GoFundMe effort here.