Astronomers Closer to Solving the Mystery of Fast Radio Bursts 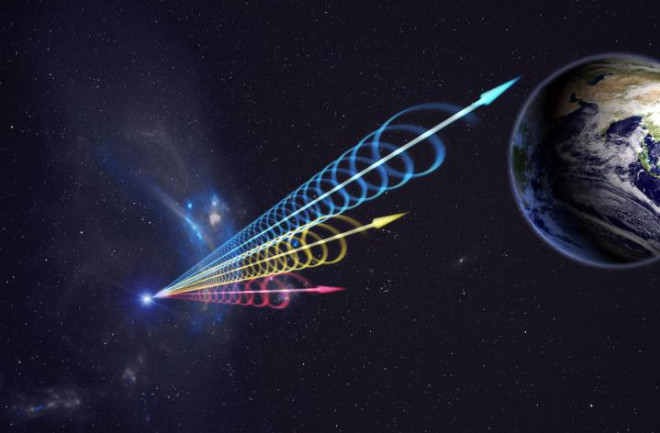 An artist's illustration of a Fast Radio Burst (FRB) reaching Earth. (Credit: Jingchuan Yu, Beijing Planetarium) Astronomers recently received another cryptic “hello” from the other side — of the universe that is. Nearly a decade ago, scientists detected a strange and powerful radio signal bursting from space, but they couldn't explain where it came from or what had caused it. Recently, astronomers once again discovered another mysterious radio signal, or so-called Fast Radio Burst (FRB), but this time, the signal revealed clues about its origin.

Scientists Duncan Lorimer and David Narkovic detected the first FRB signal in 2006 after combing through data from the Parkes Observatory in Australia, and since then only 16 have been found, including the recently detected FRB 110523. These short, millisecond bursts often elude researchers because they last a fraction of a second, and today’s radio telescopes can only scan a small portion of the sky, likely missing countless other similar bursts. Cosmologists at the University of British Columbia in Vancouver were sifting through 650 hours of data from the Green Bank Telescope while creating a map of the universe when they found what turned out to be an FRB, or the radio equivalent of finding a needle in a haystack.

Kiyoshi Masuyi and his team were thrilled to have discovered one of these mysterious signals; only this one was different from the rest. This particular FRB carried with it a polarization signature, which is characteristic of a wave that has traveled through a heavy field of electromagnetic radiation. The signal also exhibited telltale signs of Faraday rotation, which is an interaction between light and magnetism that twists radio waves into a corkscrew shape.

The Green Bank Telescope (Credit: Zack Frank/Shutterstock) The corkscrew shape, researchers believed, served as proof that the burst they detected traveled through a powerful magnetic field at its source, and subsequently sped through a large cloud of plasma before being picked up by terrestrial telescopes. “FRB’s are exotic and enigmatic. This discovery with the GBT is extremely important because, for the first time, it sheds light on the environment where FRB’s can occur,” says Jay Lockman of the NRAO in Green Bank.

Still, scientists don’t know what creates these FRB’s and where, exactly, they are coming from, but a broad understanding of the environment from which FRBs originate is a step in the right direction. “We still don’t have a good idea of what could be causing these bursts, but we are very confident that they are not man made communication signals. We are also very confident that these are not coming from our galaxy, they are extra-galactic, but beyond that it’s still a highly unknown question,” says Masui. Although astronomers don’t know which galaxy is responsible for this most recent FRB, they do have a range of how far it traveled. As radio waves zip through space, they “smear” outward, and astronomers use this this “smearing,” or what’s called dispersion delay, to calculate the distance traveled by the signal — the more the dispersed the wave, the farther it has traveled. As far as FRB 110523 is concerned, they have a general range for its journey. “The minimum distance (FRB 110523) has traveled, is no further than 6 billion light years, which is almost half the age of our universe, and likely not any closer than 100 million light years,” says Masui.

Scientists at the National Radio Astronomy Observatory have several theories to explain the origin of these peculiar radio signals. FRBs, they say, could be a product of a supernova, two black holes colliding, or perhaps a spinning neutron star. Radio astronomy technology continues to advance, and telescopes of the future, such as the Canadian Hydrogen Intensity Mapping Experiment (CHIME), will survey a larger swath of the sky for phenomena like FRBs. Scientists estimate some 2,500 FRBs occur each day, so the sample size of FRBs they do have is minute. Once larger arrays like CHIME come online, the chances of collecting a wider sampling of FRBs is bound to increase. And with a larger sample size, astronomers will continue to peel back the layers of the FRBs. Scientists hope that discovering more radio bursts will help them build a more detailed map of the universe, and better define our place within it. In the meantime, scientists like Masui will continue to read the sky and sift through mountains of data with the hopes of detecting another fleeting signal of light from a distant galaxy.