Astronauts Didn't Sleep So Well on the Moon 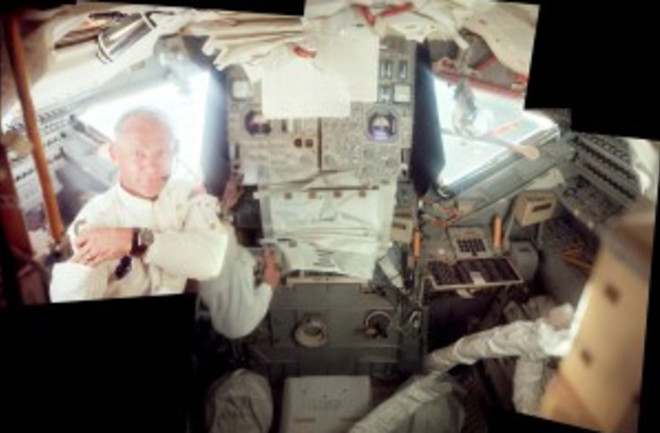 Inside the cramped and tiny Lunar Module. NASA/Hancock.

The habitable volume of the Apollo lunar module was just 160 cubic feet. That might sound like a lot for two men, but when you consider that it was filled with the bulky lunar EVA suits and life support systems, rocks collected from the surface, and all the other things needed for a lunar stay it wasn’t exactly roomy. Add the noises of the environmental control system and the light streaming in the window and it might be the least restful place for a nap.

Early mission planning showed that the first landing landing flight, which became Apollo 11, would spend about 22 hours on the surface. That meant NASA knew right from the start that astronauts were going to be sleeping on the Moon; it wouldn’t just be a consideration for the later extended missions.

All the same, the LM was built for functionality, not for comfort. The spacecraft was built solely to land on the Moon, and one of the design constraints was that it be as light as possible. Weight was such a premium that bundles of wires weren’t hidden behind panels because the panels would add too much weight. Plumbing was exposed, circuit breakers were uncovered, and the vehicle’s shape worked around things like fuel tanks. The result was that the LM didn’t exactly have luxurious sleeping quarters.

Adding to the discomfort was that the lunar missions didn’t sync up with the astronauts’ natural wake/sleep cycles. Every event on a flight was timed around the landing, so sleep periods could come at 3 o’clock in the afternoon Florida time, the time zone astronauts were used to living in in the days leading up to a launch. Add offset sleep periods to an uncomfortable spacecraft and it’s not hard to see how sleep on the Moon could be hard to come by.

As it turned out, it was.

History’s first lunar sleep period came after Neil Armstrong and Buzz Aldrin walked on the Moon; the original plan called for a sleep period before going outside but excitement prevailed and the EVA was moved up. Once back inside, Armstrong and Aldrin tried to make themselves as comfortable as possible without any beds. As per an early schematic of rest positions, Armstrong lay on the ascent engine cover with his legs in a makeshift sling, his boots under the DSKY, and his head on a flat shelf. Aldrin curled up in a semi-fetal position on the floor — neither could properly stretch out in the tiny spacecraft.

Exacerbating the already uncomfortable setup was their bulky spacesuits; this was NASA’s attempt to keep any dust they tracked back inside after the EVA from behind inhaled. Mission planners also hoped that the buttoned up suits would cut out some of the ambient noise, but it didn’t. All night the glycol water pump whirred. The suits got uncomfortably cold even with the cooling system disconnected. And it was uncomfortably bright. A fair bit of sunlight bled in past the windows shares, and the display lights and illuminated switches only added to the brightness. The crew eventually took off their helmets but nothing really helped. Sleeping in the LM became a battle to find what Armstrong called in the post-flight debriefing “a minimum level of sleeping conditions,” and it was a battle they lost. “The rest period was almost a complete loss,” he said.

Lessons learned, NASA made some changes when Apollo 12 landed in December of 1969, the biggest of which was the inclusion of beta cloth hammocks. Pete Conrad as Commander hung his hung front to back while LMP Al Bean slung his own lower down running side to side. They effectively made an X sleeping on top of one another. They also had blankets, insulators, and Velcro attachment pads to help them settle in, not fall, and keep warm. But even with the new sleep aids it wasn’t a great night. The glycol water system was no quieter, and neither man chose to use earplugs or take a sleeping pill, a decision Bean later regretted. Adding to the bad night was some trouble with Conrad’s right boot pulling his suit down painfully on the shoulder. Since neither of them were properly asleep be woke Bean to relace it.

The stakes were higher on Apollo 14. For the first time NASA had multiple EVAs so needed the crew to be rested enough to work effectively on the second sortie. But Al Shepard and Ed Mitchell didn’t have much of a better night than their lunar predecessors. They were just as uncomfortable, but they had the added problem of a slanting lunar module. The spacecraft landed on uneven ground and was tilted about 7 degrees to one side. The unfamiliar feeling of being in a lower gravity environment plus the scary tilt left them both with insomnia. They both kept peeking out the window to make sure they weren’t tipping over, and the sleepless night reinforce for Mitchell that they were the only two living things on a dead body.

And of course there was plenty of cabin noises to keep them awake. At one point, Shepard whispered, “Ed? Did you hear that?”

“Hell, yes, I heard that,” came the whispered reply.

“What the hell was that?”

Then Shepard had another question. “Ed?”

“Why the hell are we whispering?”

The sleep problem got a little better on Apollo 15 thanks to NASA’s growing understanding of the astronauts’ needs on the Moon.  Which was very good timing. This was the first extended mission with a longer stay and more demanding EVAs and the first to use a lunar rover to cover more ground. The crew was also the first to take off their suits completely and sleep in their liquid cooled garments. They slept much better with the relatively comfortable underwear, and configuring the environmental control system differently plus the use of earplugs cut down on noise. Their biggest problem was light seeping into the cabin, but otherwise it looked like NASA was getting the hang of training astronauts for nights on the Moon.

Success of sorts finally came with Apollo 16. Both John Young — who tried sleeping without his liquid cooling garment one night — and Charlie Duke slept well in their criss-crossing hammocks. Duke did take a sleeping pill the first night but woke up twice from errant master alarms and once from static in his earpiece. But all in all they slept remarkably well with Young going to far as to say he slept like a brick.

On the final landing mission, Apollo 17, Gene Cernan and Jack Schmitt also took their suits and liquid cooling garments when it was time for bed. Each found that the constant wear garment was a much better choice for a good night’s rest; it was cleaner than anything else they’d been wearing and the lack of pressure from the tubes woven into the suit was a relief. Their main problem was the lack of space. The suits may have been uncomfortable to sleep in but they were bulky, and once they were off it was like having two more men in the LM.

One thing in the quest for lunar sleep that NASA didn’t anticipate or know how to solve was the problem of adrenaline and awe. Almost all the astronauts recalled once they were back home that at some point during a sleepless night they would look out at the Moon’s surface and marvel that they were actually there. And really, who could blame them for wanting to take in every second of that view?

Apollo 17's Gene Cernan inside the cramped lunar module. Gives a sense of how little space there was with the suits off. NASA.

Apollo 17’s Gene Cernan inside the cramped lunar module. Gives a sense of how little space there was with the suits off. NASA.