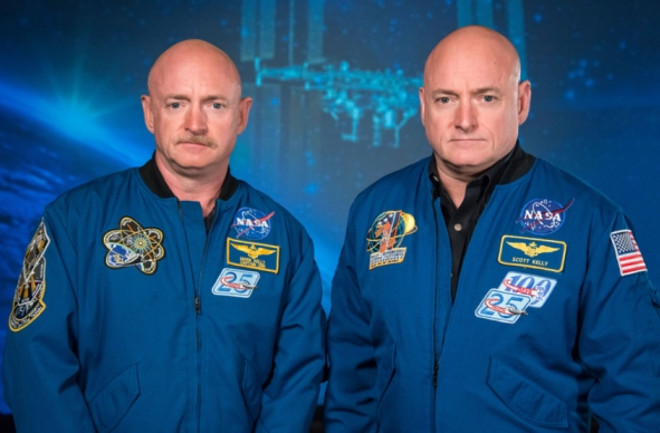 NASA astronaut Scott Kelly (right) and his twin brother Mark. Credit: Robert Markowitz/NASA NASA is about to take yet another bold step toward sending humans to Mars. At 3:42pm Eastern time tomorrow afternoon, NASA astronaut Scott Kelly will strap into a Russian rocket and kiss Earth goodbye for an entire year to live on the International Space Station. Meanwhile, his identical twin Mark, a retired NASA astronaut himself, will stay here on Earth. Both men, though serving on vastly different fronts, are the guinea pigs in a big-time NASA study that will examine the physical and psychological effects of extended stays in space. By comparing changes in the bodies of the 51-year-old men, scientists hope to learn what it will take to safely send humans to Mars, a seven-month undertaking just in travel time.

Toward the Red Planet

For decades we’ve been hearing about sending humans to Mars, but it’s always been a far-off ambition. But recently, NASA has taken some big steps toward making it a reality. In December 2014, NASA’s experimental Orion spacecraft passed its first unmanned flight test. It was a big win for NASA, since Orion is the craft that could someday taxi humans to Mars. A second test run — to the Moon and back — is planned for 2018. Friday will mark a further step in the testing of mankind’s spaceworthiness. While in space, Scott will undergo regular mental and physical health tests that will leave no stone unturned. Scientists will monitor changes to his vision, gut bacteria, bone density, metabolic activity, behavioral health and more. Back on Earth, his brother Mark will also undergo a series of physical and mental tests. Scientists will then compare data gathered from the twins to get insights into space-related health effects. Russian cosmonaut Mikhail Kornienko, who will also spend a year in space and undergo similar cognitive and physical tests, will join Scott on Friday's launch. Here's more detail on the mission:

The Kelly twins will also have their genomes sequenced, making this the first orbit-versus-Earth comparative analysis of two genetically identical people. Researchers will look at how genes are turned off or on over time, whether any mutations develop, and how telomeres, the caps on the ends of chromosomes, shorten in both men. However, Alexandra Witze points out in Nature, we may never see the results of the genome-wide study if scientists discover sensitive medical information that the twins don't want released. By the end of the mission, Scott will set an American record for the most consecutive days spent in space. However, cosmonaut Valery Polyakov, who spent 438 consecutive days in space aboard the MIR space station, will still hold the world record.

Most missions to the ISS last between four and six months, but even in that time frame the body goes through physical changes such as bone loss, muscle atrophy and, apparently, a strange eye twitch.

NASA Astronaut Scott Kelly inside a Soyuz simulator at the Gagarin Cosmonaut Training Center in Russia earlier this month. (Credit: NASA/Bill Ingalls) There are also the psychological challenges. Scott will leave behind a home in Houston, two children and his girlfriend of five years to live in a metal enclosure with about as much habitable space as a 747. Although the views are pretty good, things are bound to get a little stale. In an interview with the Associated Press, Scott said he would miss the weather (besides his loved ones):

“It never changes on the space station,” he said. “Even though it’s a pretty nice environment, I guess it’s like living in Southern California, people get sick of it ... after a while.”

On his Twitter feed, Scott has been posting about tying up loose ends, such as shutting down his office and saying goodbye to friends and family — for a year at least.

Back here on Earth, we’ll certainly be cheering for Kelly and Kornienko as they further expand the boundaries of human space exploration.