Asteroids pummeled our planet during its first 2 billion years. But the consequences for life were not what you might expect. 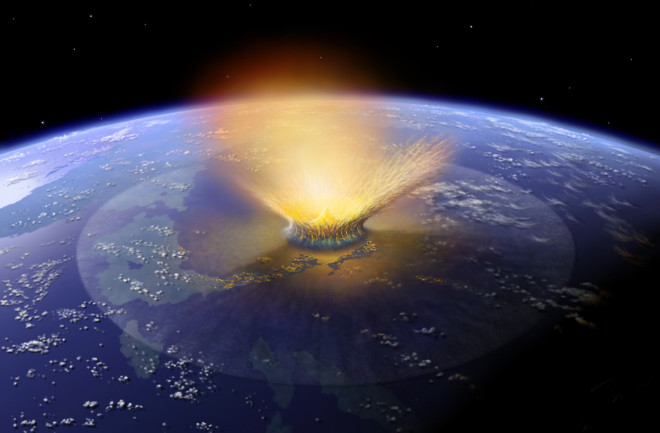 We live on a planet shaped by violent extraterrestrial visitors: close encounters of the asteroid and comet kind. That idea, once considered controversial, now lives thoroughly in the mainstream. Even school kids know that a 6-mile-wide asteroid strike at the end of the Cretaceous Period, 65 million years ago, helped usher the dinosaurs offstage. Evidence suggests similar impacts have contributed to other regional and global extinctions as well, possibly including the Permian-Triassic event 251 million years ago, the greatest recorded wipeout of them all.

Yet in many ways, scientists have barely begun to comprehend the full, complex relationship between life on Earth and death from above. All of the well-documented mass extinctions have occurred within the past 550 million years. Most of the known impact craters are no older than that, either. That may sound like a long time, but life on this planet began at least 3.5 billion years ago, meaning that more than 80 percent of the story is missing. It is a vast, highly obscured and oft-overlooked stretch of history that a few dogged researchers are only now piecing together.

Bruce Simonson of Ohio’s Oberlin College is one of the leading sleuths. He and the few others in this small field have excavated evidence of 15 enormous asteroid strikes that occurred between 1.7 billion and 3.5 billion years ago. “We’ve documented a minimum of four big impacts right around the end of the Archean [2.5 billion years ago], all of which I would bet money are at least as big as the one at the end of the Cretaceous,” he says. Those impacts marked, in essence, the final stages of Earth’s development into the planet it is today.

Intriguing patterns lie hidden in the data. The impact rate appears to have begun tapering off 3.5 billion years ago, just around the time the first microbes appeared on this planet. The spate of big hits at the end of the Archean coincides with the buildup of oxygen in the atmosphere and the evolution of the first multicellular organisms.

It is extremely difficult to prove cause and effect in this hazy stretch of history, but just as the Cretaceous blast kicked aside T. rex and cleared a path for mammals like us, the giant early impacts undoubtedly changed life on Earth in dramatic ways.

The process of tracking down early impacts is every bit as detailed as the actual impacts were dramatic. Forget about looking for anything as obvious as a crater. Most of Earth was covered with ocean in the Archean era, and any asteroid scars on the ocean floor would have been recycled back into our planet’s interior millions of years ago. There’s not much continental rock left from the first couple of billion years of geologic history, either. There are just two notable surviving chunks of Archean crust: the Barbeton greenstone in South Africa and the Pilbara region of Western Australia.

A breakthrough in reading Earth’s early impact history came from geologists Gary Byerly of Louisiana State University and Don Lowe of Stanford in the 1980s. They realized that giant impacts would melt rocks and create distinctive glass spherules unlike anything created by a volcano or any other terrestrial process. Such spherules are, in fact, often seen in ancient strata. They are not even particularly hard to find, once you know what to look for. “You can recognize them with a hand lens,” Simonson says. “They look like caviar.”

Finding the spherules is only step one, however. Next is the tedious work of identifying the companion chemical signatures of an asteroid impact, such as the element iridium, alongside the spherules. Then there is the matter of calculating the ages of the spherules, which involves the separate, delicate art of radioactive dating. And all of that research can take place only in those two tiny regions of Australia and South Africa.

Given all those constraints, the 15 ancient impacts Simonson and company have studied probably represent only a tiny fraction of the total number that struck during that era. Even so, the brutality of Earth’s early history immediately jumps out. The evidence indicates that our planet was repeatedly bombarded by objects up to 30 miles wide, with some impacts up to 500 times as energetic as the one that ended the Cretaceous. Each of these collisions would have boiled the oceans, cooked what little dry land there was, then blanketed the globe in sun-blocking dust for months or years.

The most potent impacts may have transformed the planet in more profound ways. Last year, Lowe co-authored a paper describing a particularly devastating asteroid strike that occurred 3.3 billion years ago, right around a time full of wrenching geologic changes. Lowe speculates that the collision opened up fractures in the Earth’s crust and changed the planet’s plate tectonics.

Earth has long been a target of cosmic collisions, with activity ramping up about 4 billion years ago. In these maps, each area represents the final estimated crater size and location of a collision from roughly that time, with redder spots showing older impacts and bluer spots younger. (Credit: NASA/Ames Research Center/Simone Marchi et al. 2014)

Which brings us back to the big mystery motivating Simonson’s research: What did those disruptive extraterrestrial visitors do to terrestrial life? Did an ancient extinction spur the rise of photosynthesis, or the emergence of eukaryotic cells, or the appearance of the first predatory microbes? “Right, that’s the $64 question,” Simonson says. (Apparently he came of age in an earlier era of game shows.)

The frustrating answer is that we may never know fully, though we can learn a lot more. Simonson is excited about the potential of new chemical techniques that can identify the types of asteroids or comets that struck, which could flag clusters of related impacts. Training more geologists to think in terms of impacts and look for layers of spherules should also make a huge difference; there may still be a lot of evidence lying around that simply has not been collected and analyzed. Few researchers look for such things, Simonson notes, “and if you don’t look, you don’t find.”

Filling in that history will clarify the intertwined timelines of biology and celestial dynamics. Although Earth formed 4.5 billion years ago, it apparently experienced a delayed spike of impacts several hundred million years later. That episode, called the Late Heavy Bombardment, may have been connected to the migrating orbits of some of the planets, which exiled Pluto to its current position and shook loose a barrage of giant comets.

Terrestrial life probably could not get going until the Late Heavy Bombardment died down about 3.8 billion years ago. Some planetary systems around other stars seem to experience more extreme planetary migrations, and perhaps more extreme pelting as well. Understanding the interplay between wandering planets, impacts and habitability will reveal a lot about whether the worlds in those systems could support alien life.

In the subsequent era on Earth, one of the most intriguing insights from the latest history of impacts is what we don’t see. Life continues uninterrupted over the next 3 billion years despite repeated incendiary events that seem like they should have sterilized the planet. In the better-preserved record from the past 550 million years, most asteroid strikes are not associated with any obvious die-offs, making the case of the dinosaurs something of an outlier. “We have a bunch of impacts and just one extinction. I’d say life coped pretty well with them,” Simonson says.

Once the intensity dropped anywhere below the full-on catastrophe level, impacts may have been helpful as drivers of evolutionary innovation. That suggests a counterintuitive idea in the broader search for life in the universe: Maybe a little death from the skies is actually a good thing.

This article originally appeared in print as "In the Line of Fire."