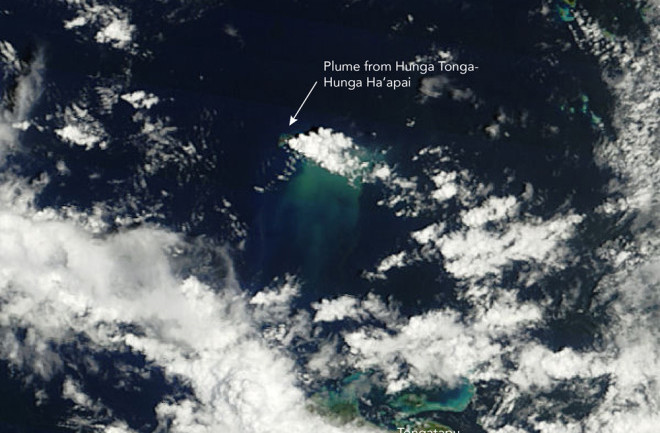 The steam-and-ash plume from Hunga Tonga-Hunga Ha'apai, seen on January 7, 2015 via Terra/MODIS. Image: NASALast month I noted that a new submarine eruption had started at Hunga Tonga-Hunga Ha'apai in the Pacific Ocean. At the time, the eruption appeared to be fairly minor, with some discoloration of the sea and a steam plume. However, since early January, the activity has intensified to the point where air traffic in and out of Tonga has been disrupted, leaving hundreds of people stranded. The volcano produced a ~9 km (30,000 foot) ash plume (based on reports from pilots) and this might suggest that the eruption has either become stronger or that it is closer to the surface, where intense mixing of seawater and erupting lava cause phreatomagmatic explosions. Reports from people living on Tongatapu, only ~80 km from the eruption, say the plume has changes from more ash-rich to more steam-rich (and back) during the few weeks of activity, which suggests that more magma reaches the surfaces at some times rather than others. The latest report from from Wellington VAAC suggests the eruption might be waning some, as pilots have reported that all has been noticed is sulfur odor at ~4.8 km (FL160). No ash has been reported in the area since yesterday and nothing shows up on the satellite images as well. This means that the flights should be resuming around Tonga. One of the more striking descriptions of the eruption is the supposed "blood red seas". Now, it isn't the volcano that is directly causing the 'blood red' water, but rather an algal bloom related to addition of heat and nutrients (like iron) to the water from the prolonged eruption. Such blooms were noted after the eruption at Kasatochi in the Aleutians when ash added significant iron to the surface seas.