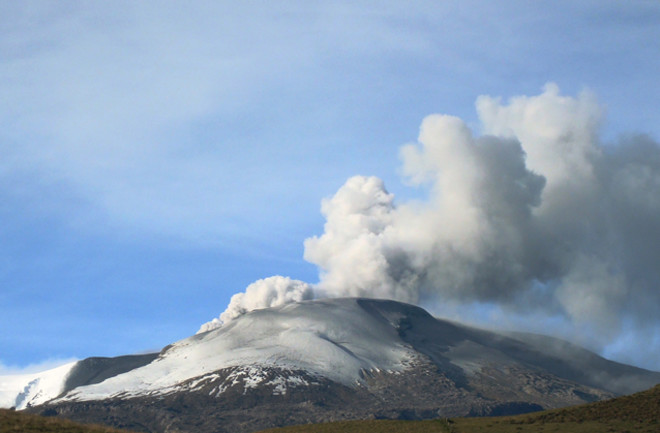 I might have guessed that just after reading an article about how USGS geologist left Colombia this week after helping set up monitoring for Nevado del Ruiz that the volcano do something. Sure enough, today the volcano experienced a series of explosions that produced ash that fell on the city of Manizales, ~30 km from the volcano. The volcano had recently been lowered from Orange to Yellow status by INGEOMINAS, however a new earthquake swarm that started at 3 A.M. on Tuesday (May 29) prompted the return to an Orange alert, meaning an eruption in days to weeks. These new explosions are spreading ash in the region near Ruiz, but I have yet to see any information about the nature of the ash - is it juvenile (new) magma or just pulverized rock fragments caused by increasingly intense steam explosions at the summit. If it is juvenile, then we might be seeing magma reaching the surface at Ruiz, with this morning's earthquakes being the precursor signs of the magma on the move. UPDATED MAY 30MSNBC posted some video of the ash fall near Ruiz - looks to be a few millimeters to a centimeter in some parts of Manizales. The video also mentions that the plume reached ~1 km. The latest INGEOMINAS update mentions that the volcano is experiencing constant tremor, similar to what occurred during the 1985 and 1989 eruptive periods, however INGEOMINAS director Marta Calvache reported that ash emissions were down this morning. It seems that the webcams for Nevado del Ruiz are only intermittently working, but the webicorder shows just how much tremor the volcano is feeling right now. You can also seen how prominent the sulfur dioxide emissions from Ruiz were on Sunday (May 27), two days before these new explosions. The explosions have put enough ash into the skies to prompt the closure of airports in Manizales, Armenia (~60 km) and Pereira (~40 km - and my mother's home town). Government officials have also issued evacuation orders for 500 people living near the volcano as part of the first level of response to an eruption at Ruiz. Dust masks are also beginning to be distributed to local residents as well. There are three INGEOMINAS webcams pointed at Nevado del Ruiz, so you can check them out when conditions are right to see what the volcano might be doing.