One of the night sky's brightest stars is now the faintest it's been in a century. Astronomers aren't sure what it means. 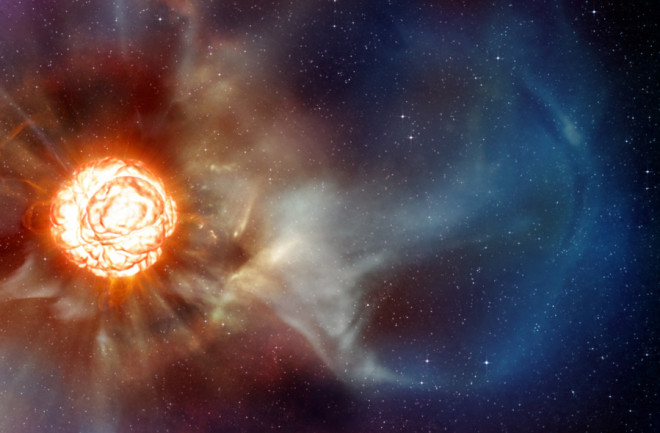 This artist's impression shows a vast amount of material being flung into space from Betelgeuse. (Credit: ESO/L. Calcada)

Over the last few weeks, Betelgeuse, the bright reddish star in the constellation Orion, has dimmed to the faintest it's been in a century. Astronomers have been buzzing with excitement about the event, discussing the star over social media and speculating what might be going on.

The big question on everyone’s mind is whether the star is about to go supernova and explode. That’s probably not what’s about to happen, astronomers say, but they’re still excited to be witnessing behavior they’ve never seen from Betelgeuse before. There’s a lot that astronomers still don’t know about the variable behavior of supergiant stars like Betelgeuse, so any strange activity is a chance to learn more about the lives of stars.

For over a century, astronomers have watched Betelgeuse brighten and dim again and again. Betelgeuse is a red supergiant, a star late in its life that has expanded to an enormous size. Bubbles of material rise from inside the star to its surface and sink back down, changing the mix of hotter and cooler stuff on the star’s surface. These changes make Betelgeuse appear brighter and fainter over time.

For about 25 years, Richard Wasatonic, an astronomer at Villanova University, has measured the brightness of Betelgeuse with a 10-inch-diameter telescope in his backyard. He's worked with another Villanova astronomer named Edward Guinan, as well as an amateur astronomer named Thomas Calderwood. In October, they noticed that Betelgeuse was getting fainter again. By early December, they realized that Betelgeuse had gotten fainter than it had in the past 25 years and put out a post on a site known as The Astronomer’s Telegram to alert other astronomers.

“It kept getting fainter,” Guinan said. “Every night, it was fainter than the previous night, and I said, ‘Well, it has to stop soon.’ And it hasn’t.”

On Dec. 23, they posted an update. Betelgeuse had gotten fainter still, and it was now the faintest it has been in the last century or so — for as long as astronomers have been able to measure its brightness with detectors rather than judging by eye. At its brightest, Betelgeuse is usually one of the six or seven brightest stars visible to humans in the night sky. By mid-December, it had dropped several places on that list, to 21st brightest.

The unusual dimming episode has made some astronomers wonder whether Betelgeuse is about to go supernova. Life on Earth would be fine if Betelgeuse did explode.

Based on its mass, astronomers estimate that the supergiant will go supernova when it’s roughly 9 million years old. According to Guinan, Betelgeuse is probably between 8 million and 9 million years old now. Astronomers have recently estimated that Betelgeuse might be due for a supernova in about 100,000 years or so. When it blows, it'll be spectacular. The explosion will be about half as bright as the full moon, Guinan said. Anyone lucky enough to be around would be able to see it shine during the day for months until it fades away.

Astronomers have carefully observed the behaviors of many stars after they exploded as supernovae. But no one has had a detailed look at how a star behaves leading up to a supernova. So astronomers don’t really know whether the current dimming event is leading up to a supernova. What they do know is that it’d be pretty unlikely for the explosion to go off now when there’s so much uncertainty in their understanding of Betelgeuse’s behavior and even its age.

Guinan and his team will keep monitoring Betelgeuse, as they have been for decades. Based on Betelgeuse's past dimming and brightening patterns — the star seems to cycle in brightness both every six years or so and every 425 days — they expect that it'll get its faintest in January and then get brighter again. But they'll have to see if that's the case.

"It defies prediction," Guinan said. "It's hard to predict what it’s going to do in the future."