Arthur's Agony: How Inception's Arthur Could Have Resolved His Momentous Dilemma 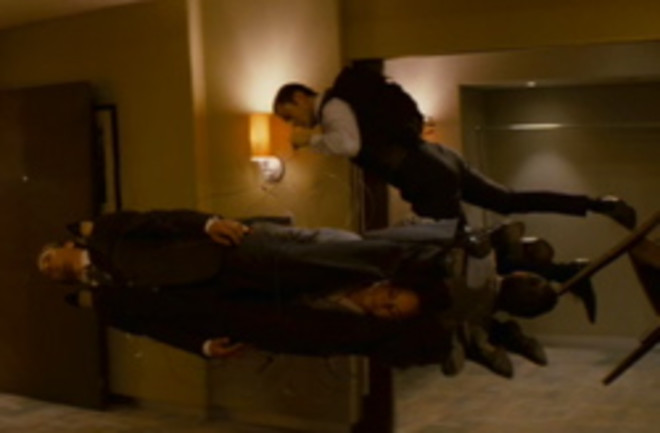 This post necessarily has spoilers, so most of the text is below the jump. But those who have seen Inception will recall the character Arthur, played by Joseph Gordon-Levitt, had to solve a moderately interesting physics problem to resolve a part of the plot. His solution struck me as...exotic. Some alternative proposals after the jump. To recap, in order to get Cobb, Ariadne, et. al. out of dream-within-a-dream level 3 and up to dream-within-a-dream level 2, Arthur had to give them their "kick": The sudden sensation of falling. Yusuf's special soporific concoction didn't effect the inner ear, so sleepers would wake up from a feeling of sudden acceleration like falling. We later learn that the "kick" can be the sense of falling itself, or the sudden stop at the end of falling, generally known as "crashing". The original plan in the film was to blow up the floor of the hotel in room in which the characters slept, causing them to fall and thus wake up. But when the van in dream level 1 went off the bridge, by the rules of the film, the dreamers became weightless. How to make them fall? Arthur's solution was to tie together all the bodies with a cord, push them into the elevator, attach the explosives to the side of the shaft above the elevator (or possibly on the elevator roof, I forget exactly), and set off the explosion, propelling the sleepers downward and waking them up. That worked, but seemed like a lot of labor. How about: * Pushing the tied together bodies out the door into the hallway. Tie one end of a length of line (or wire) to the people and tie the other end to the door handle or something else solid. Push the bodies away as hard as possible. They should accelerate until they wake up, or when they reach the end of the line, they'll stop with a sudden jerk. * Taking the tied together sleepers, spinning them around fast. If that didn't work, Arthur could grab a door jamb with one hand and the spinning block of bodies with the other hand, bringing the spinning to a sudden stop. (Credit for this idea to my wife and ad hoc inner ear expert Miriam Goldstein) * Using a fire extinguisher, or multiple extinguishers. Most hotels have fire extinguishers in the hallways. Water extinguishers use a CO2 canister at 2000 PSI to propel the water, so the initial burst might provide some momentum, and CO2 fire extinguishers are often stored under far higher pressure. One may not be enough to get those bodies moving, but several in succession might do the job. * Using the explosives, but skipping the elevator part. Push the bodies into the hallway and tie them together as described above, and then set off the explosive maybe from one end of the hall. The shock wave would propel everyone at high speed. Maybe Arthur wouldn't even need to tie the group together. Clearly, Arthur had options. Anyone else have ideas?