Are We Alone? Citizen Science and the Search for Exoplanets 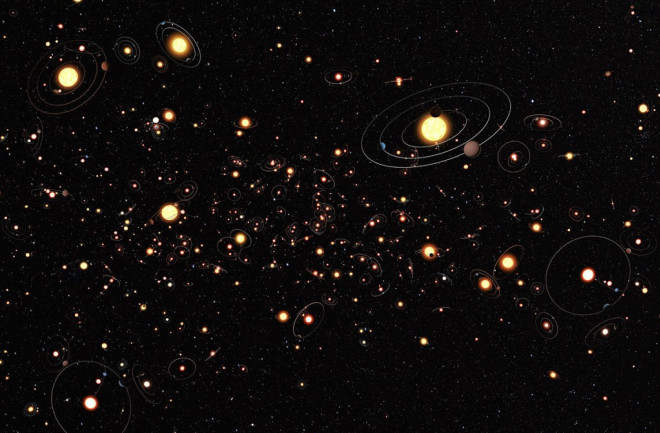 Image Credit: ESO/M. Kornmesser Recently I attended a lecture by award-winning astronomy professor Dr. Andrew Fraknoi, who spoke about the most exciting research happening in astronomy today. He said that while black holes and gravity waves are interesting, the research he finds most intriguing is the search for planets in other solar systems, called exoplanets. What sets exoplanet research apart, he said, is that it takes us a step closer to answering the fundamental question humans have always wondered … are we alone? I was excited by his statement because I also recently met a couple of scientists at Mauna Kea’s Keck Observatory in Hawaii who have created a new citizen science project—called Project PANOPTES—focused on the search for exoplanets. Named after the Greek giant with 100 eyes, the goal of the project is to establish a worldwide network of volunteers who can assemble and use robotic telescopes to monitor a large fraction of the night sky for exoplanets. The data the volunteers collect will be analyzed for clues and shared with professional astronomers who have access to more powerful telescopes and can verify the findings. Because exoplanets are hard to see compared to stars, exoplanet research is relatively new in the field of astronomy, said Project PANOPTES co-founder and MacArthur Fellow Olivier Guyon, an optical physicist for the University of Arizona and astronomer at the Subaru Telescope in Hawaii. I met Guyon, and Project PANOPTES co-founder and W. M. Keck Observatory astronomer Josh Walawender, when they gave a talk and led a stargazing event in Hawaii earlier this year. At the event, they explained that since the first discovery in the early 1990s, astronomers have detected more than 2,000 exoplanets, usually by using one of two search methods conducted from Earth or through spacecraft expeditions such as Kepler. One method is the radial-velocity method, or “wobble method.” Planets exert a small amount of gravitational pull on the stars they orbit, causing the stars to “wobble” a bit when a planet passes by. Using powerful and sophisticated technology, scientists can detect this “wobbling” by measuring changes in the spectrum of light that is emitted by the star. Another method researchers use is the “transit method,” which involves detecting a small dimming in the brightness of a star when a planet passes or “transits” in front of it. The “transit method” requires less powerful technology, but only works when the planet moves directly in between the star and the person viewing it (similar to an eclipse). Therefore, scientists can only use it to scrutinize one tiny section of the sky at a time, a time-consuming effort. The Project PANOPTES team aims to use the “many-eyed” technique of citizen science to turn this once limited transit method into a more effective strategy to search for exoplanets. To do so, a few years ago, Guyon designed a transit method robotic telescope system using a couple of off-the-shelf cameras, odds and ends from his garage, and an equatorial mount that allows the telescope to follow the movements of the night sky. The Project PANOPLIES unit—or Panoptic Astronomical Networked Observatories for a Public Transiting Exoplanets Survey—looks like a droid character from a science fiction movie and the robot’s two “eyes” are digital cameras (like those you might use every day) that have wide field lenses. The unit is also programmed to use a special algorithm, designed by Guyon, which enhances the cameras’ ability to capture light. Guyon, Walawender and the rest of the team—Subaru Telescope astronomer Nem Jovanovic, Australia's Macquarie University graduate student Wilfred Tyler Gee (who is doing his Master's on PANOPTES), and Arizona optical scientist Mike Butterfield—have tested the prototype and are now looking for citizen scientists to join the effort. During this first phase of deployment, they hope to engage schools, astronomy clubs, and other enthusiasts in the project. Participants are invited to use the Project PANOPTES blueprints to build their own units using off-the-shelf equipment (which keeps the cost down to about $5,000) and are assigned their own corner of the sky to monitor. The Project PANOPTES team also hopes some of the citizen scientists will be interested in helping them refine the robotic unit, develop and run data analysis processes, and grow the project into a world-wide effort. In addition, the Project PANOPTES team is now working closely with NASA's Exoplanet Exploration Program at Jet Propulsion Laboratory to ensure that PANOPTES will successfully expand in the US, Guyon said. NASA's support includes funding and technical development as well as coordination with US astronomy education and outreach groups. To learn more or to help Project PANOPTES discover if we are alone in the universe, check out the project page on SciStarter.