Are We All Martians?

Conditions on early Earth may have been too extreme for life to begin, but not so on our planetary neighbor. 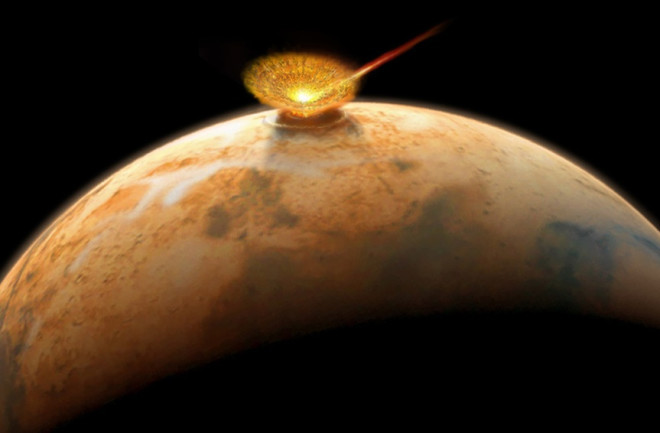 A tremendous volcanic blast or spectacular asteroid crash (illustrated here) could have sent Martian microbes into space and onto Earth, possibly starting all life on our planet. (Credit: Don Dixon)

Legend has it that in 1938, a radio broadcast about a Martian invasion of New Jersey incited panic; not everyone realized it was a fictional drama — Orson Welles’ adaptation of The War of the Worlds. Nowadays, people might regard the notion of Martians taking over our planet as pure fantasy. But Steven Benner, a levelheaded scientist of some repute, suggests that perhaps the invasion already occurred billions of years ago. Maybe Martians are not merely among us — maybe they are us.

Benner — a Harvard-trained chemist who started the Foundation for Applied Molecular Evolution, an associated research institute and two bioscience companies — wasn’t trying to be provocative when he presented the idea at a geochemistry conference last August. As a longtime investigator into the origins of life, he’s seen multiple lines of scientific evidence starting to stack up. Microscopic life, he says, might have first taken hold on Mars and then caught a ride on a space rock to our planet, where things evolved from there, so to speak. It’s not as crazy as it sounds.

To begin thinking about this, scientists first need to figure out how a genetic molecule capable of jump-starting life might spontaneously arise from a “prebiotic soup” of organic compounds. An obvious candidate, DNA, hides in the cells of every known living organism and is endowed with the ability to encode genetic information and make copies of itself. But many researchers in the primordial biology game, Benner included, focus instead on RNA, or ribonucleic acid, a biological precursor to DNA that can also store genetic information and self-replicate but arises more easily from organic materials.

In his lab, Benner has already reproduced the chemical steps that culminate in the creation of RNA. He found some of the key challenges that RNA would have to overcome to occur naturally — two obstacles that suggest Mars was the more likely spot for life to originate.

First is the so-called water paradox. Around 4 billion years ago, our planet was inundated with water, many geologists have concluded. That’s problematic because water corrodes RNA, literally making it fall apart. Mars, on the other hand, was significantly drier and more hospitable to RNA.

Next, you have to deal with the tar paradox, as Benner puts it. “If you take organic material and give it energy, it does not form life. It forms something more like asphalt or tar,” he says. Heating table sugar, or sucrose (an organic compound), for example, turns it a sticky brown. Similarly, if you leave a pot of chicken gumbo on the stove too long, you’ll end up with a charred mess.

In 2003, Benner began working to coax ribose — a form of sugar comprising the “R” in RNA — to emerge from the proverbial pot rather than devolve to tar, asphalt or some other blackened goo. He found a possible answer in Silly Putty, of all things. The malleable compound contains borate, a substance that seemed to protect organic compounds like ribose from going the way of caramelized sugar.

But by 2011, Benner says, despondency set in when subsequent experiments indicated that it was not ribose the borate was stabilizing, but another similar sugar. Luckily, Benner’s team made a breakthrough in 2013, discovering that a catalyst called molybdate — a form of molybdenum that includes oxygen — can reconfigure the other sugar’s atoms to convert it into ribose. But if oceans covered the Earth during its early history, borate and molybdate would have been too diluted to help make RNA. Again, Mars’ drier environment, which is known to contain these minerals, proves the better bet for life’s beginning.

Of course, in the long run Earth has proved to be a much better place for sustaining life and allowing evolution to run its course. Unlike Mars, Benner says, “Earth has kept its magnetic field, which has enabled it, in turn, to retain its atmosphere and oceans.” The magnetic field also shields Earth’s inhabitants from harmful solar radiation. If our microscopic ancestors had stayed put on Mars, there might not have been much of a tale to tell.

Martian in the Mirror

What might seem like the greatest obstacle at first — getting from Mars to Earth — is really no huge challenge, given that volcanic eruptions and meteorite collisions routinely send chunks of Mars flying off the planet. A small fraction of these fragments make their way to our world within about nine months. On average, “about a kilogram of Mars lands on Earth every day,” says Benner.

Chris McKay, a planetary scientist at the NASA Ames Research Center, believes that Benner has bolstered the case for a Martian origin of Earth life, and he points out the next crucial step: “Before it can be considered anything more than speculation, we need to find life on Mars and determine its relationship — if any — with life on Earth.”

That could take awhile, McKay says, because the Curiosity rover, which is currently scouring the Red Planet for evidence of habitability, isn’t so great at searching for life. And the next two planned missions — NASA’s InSight lander, scheduled for a 2016 launch, and the agency’s next rover mission in 2020 — probably won’t do much better.

And if we never find life on Mars at all? “That would weaken the idea,” says McKay. But it is hard to show that there was never life on Mars. “It’s hard to prove a negative,” he adds.

In the meantime, as you gaze in the mirror — adjusting your hair or noticing a new freckle — consider the increasingly likely possibility that the strange creature peering back at you is, in fact, a Martian. And try not to panic.

Panspermia — the notion that life can be transferred between different bodies in the solar system, and maybe even between different planetary systems — has intrigued us for millennia. The Greek philosopher Anaxagoras discussed it some 2,500 years ago, and the idea again gained credence in the late 19th century.

But the question has never been satisfactorily answered: Could a viable life-form, such as a microbial organism, actually withstand a journey — from Mars to Earth, for instance — that would inevitably end in a violent impact? Based on recent laboratory experiments, University of Kent physicist Dina Pasini offers a qualified yes.

So far, Pasini and her colleagues have looked at three simple life-forms: bacteria, yeast and phytoplankton (single-celled, photosynthetic algae). The last one interests Pasini the most because all it needs to start growing and reproducing in the oceans is exposure to light.

“Phytoplankton has the power to transform the atmosphere of a planet,” she says. “Sixty percent of the oxygen in Earth’s atmosphere was produced by phytoplankton.”

To simulate a transplanetary impact, Pasini took frozen pellets of Nannochloropsis oculata phytoplankton and shot them through a two-stage gas gun, using compressed hydrogen to accelerate them to about 7 kilometers a second (about 16,000 mph), the typical speed of a meteor hitting Earth. The pellets landed in a makeshift primeval ocean, made by mixing pure water with minerals purchased from an aquarium store. She found that a small fraction of the algae survived the impact. (Some scientists suspect that bacteria could survive even higher-speed collisions.)

While it doesn’t prove anything, these findings do enhance the plausibility of the panspermia hypothesis. “If we find something that we think is alien life on Mars,” Pasini says, “we’ll need to figure out whether we spawned it or it spawned us."

Steve Nadis, a Discover contributing editor, is co-author of A History in Sum: 150 Years of Mathematics at Harvard.