Are These Supermassive Black Holes on a Collision Course? 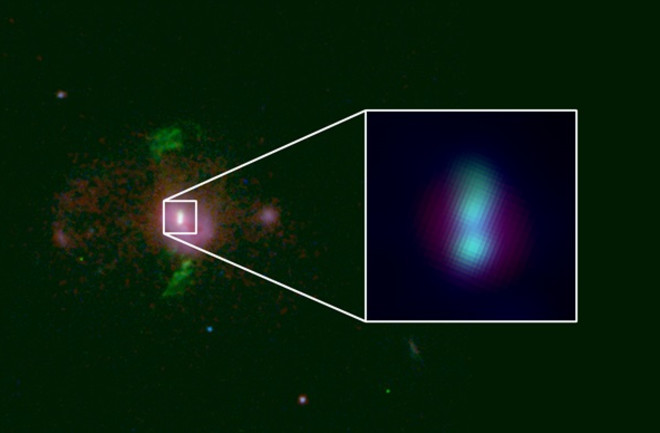 This galaxy, which sits about 2.5 billion light-years away, hosts two supermassive black holes (inset), visible because of the heated gas, dust, and stars around them. The two black holes are on a collision course, but astronomers still aren’t sure whether they will – or can – merge. (Credit: A.D. Goulding et al./Astrophysical Journal Letters 2019)

By now, merging black holes and the gravitational waves they produce are a scientific surety. Astronomers have observed several black hole mergers, all between stellar-mass black holes less than 100 times the mass of our sun. But no mergers between supermassive black holes, those with masses millions or billions times that of our star, have ever been seen; and in fact, astronomers wonder how likely such a smash-up would be. Now, the discovery of two supermassive black holes headed right for each other could help scientists answer the question of what would happen if they were to meet.

This particular pair, each more massive than 800 million suns, lies in a galaxy 2.5 billion light-years away. The galaxy itself is a merger remnant — all that’s left after two galaxies, each hosting a supermassive black hole, combined. A team led by Andy Goulding at Princeton University made the find using the Hubble Space Telescope and published their discovery July 10 in The Astrophysical Journal Letters.

Supermassive black holes merge a little differently than their lower-mass counterparts. Because they start out very far apart — in two separate galaxies — it takes a long time for the black holes to meet in the middle of a galaxy merger. Astronomers believe the supermassive black holes slowly fall to the center of the final remnant galaxy and begin orbiting each other.

But there’s a catch. Some theories state that once the supermassive black holes reach a certain distance — 1 parsec, or about 3.2 light-years — apart, they stall out and stop. That’s because to get closer to each other, the black holes give away their energy to other objects, like gas, dust, and stars that get too close. But as the distance between the black holes shrinks, the available space for objects to swoop in and steal energy also shrinks. Within about 1 parsec, astronomers calculate there simply isn’t room to fit the amount of “stuff” required for the black holes to give away enough energy to close in and collide.

“It’s a major embarrassment for astronomy that we don’t know if supermassive black holes merge,” said co-author Jenny Greene at Princeton. “For everyone in black hole physics, observationally this is a long-standing puzzle that we need to solve.”

What, then, can astronomers do to determine whether the final parsec problem is really a problem? If the theories are wrong and there is no problem, supermassive black hole pairs should approach each other and merge frequently enough to create a background “hum” of gravitational waves. “This noise is called the gravitational wave background, and it’s a bit like a chaotic chorus of crickets chirping in the night,” Goulding said. “You can’t discern one cricket from another, but the volume of the noise helps you estimate how many crickets are out there.” But this hum is outside the hearing range of LIGO and VIRGO, though astronomers are looking forward to projects like LISA, a space-based gravitational wave detector that will “hear” at frequencies current instruments cannot.

Alternatively, astronomers can use pulsars — the rapidly spilling remnants of massive stars that have collapsed into neutron stars instead of black holes — to pick up on the passage of gravitational waves. Passing gravitational waves stretch and shrink space-time as they go, which would disrupt very slightly the regular blips we receive from pulsars. This disruption would amount to a shift in the received signal of only a few hundred nanoseconds over the course of ten years or so, but if astronomers can catch such a change, it might also help them determine whether supermassive black holes can approach each other and merge.

This particular pair of supermassive black holes was spotted at about 430 parsecs (1,400 light-years) apart and won’t make their final approach for 2.5 billion years. That number should sound familiar — they’re in a galaxy 2.5 billion light-years away, meaning that if they’re going to collide, it’s likely happening about now. But since gravitational waves travel at the speed of light, astronomers won’t see the event for another 2.5 billion years, if it even happened.