Are There Mysterious Forces Lurking in Our Atoms and Galaxies?

Physicists stalk a delicate “fifth force” of nature, hidden within the interstices of the other four. What they have not found is even more amazing. 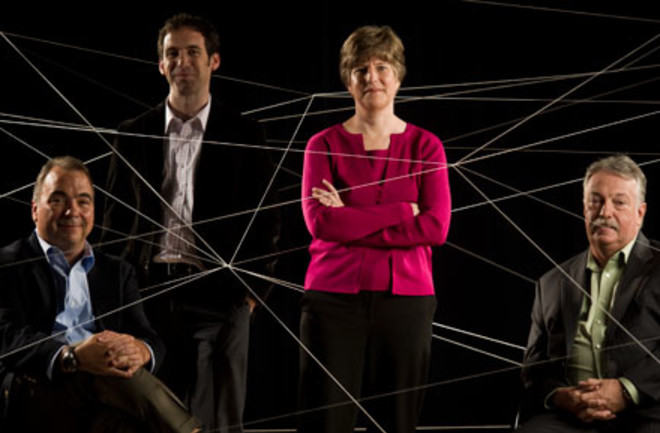 At the turn of the 20th century, finding a new form of radiation could put a physicist’s career on the fast track. Wilhelm Röntgen changed the world by discovering X-rays in 1895. Soon thereafter, Ernest Rutherford and Paul Villard identified three different kinds of radiation, dubbed alpha, beta, and gamma rays, emitted by radioactive compounds. In 1903 French scientist René Blondlot added to the frenzy with his announcement of N-rays, a strangely democratic form of radiation emitted by wood, iron, living organisms—just about anything at all.

Some 300 scientific papers were written about N-rays. There was just one problem: They weren’t real. A skeptical physicist named Robert Wood visited Blondlot’s lab and secretly removed a key part of his apparatus; this had no effect on Blondlot’s perception of N-rays, showing that they were purely a product of the imagination.

Blondlot’s reversal of fortune served as a reminder that the world isn’t really full of countless kinds of radiation waiting patiently to be discovered. Nature is more parsimonious than that. Even as forms of radiation seemed to proliferate, theory was driving physics the other way, toward consolidation. X-rays and gamma rays were soon recognized as different forms of electromagnetic radiation, like radio waves and visible light but more energetic. Beta rays are simply fast-moving electrons, and alpha rays are fast-moving helium nuclei. Beneath the dazzling array of new phenomena lurked just a few simple ingredients.

The trend toward unification and simplification is a major theme of modern physics. At the same time, nature has ways of surprising us, and it pays to be watchful. We know a lot about the physics of the macroscopic world, but can we be sure that we aren’t missing one of those crucial ingredients? The answer is yes: In certain well-defined cases, we can be very sure. Physicists long ago mapped the entire electromagnetic spectrum. The modern version of the search for new kinds of radiation is the search for new forces of nature. And while there may be unknown forces waiting to be discovered, we can say with great confidence that such forces must be so feeble that only a professional physicist like me would really care.

Here’s how I can justify such a grandiose pronouncement. According to modern physics, the world is fundamentally composed of particles interacting via forces. Over the course of the 20th century, researchers discovered many new particles interacting in many different ways. But it gradually became clear that the vast majority of such particles are merely different combinations of smaller ones, and the great variety of interactions boils down to just a few forces. When the dust settled in the 1970s, we were left with two kinds of elementary particles: quarks, which group into heavier composites like protons and neutrons; and lighter particles called leptons, like the electron and the neutrino, which can move freely without bunching into heavier combinations.

Amazingly, these particles interact through just four different forces. Two are familiar—gravity and electromagnetism. Gravity is the most recognizable force; we struggle against it every time we climb a flight of stairs. But electromagnetism is arguably more crucial to our everyday lives. Almost everything we experience that is not directly due to gravity is ultimately attributable to electromagnetism. A table is solid because the atoms in it are bound together by electromagnetic forces. The thinking that happens inside your brain can be traced to chemical signals passing between neurons, and those chemicals move the way they do because of electromagnetism. Radio waves, visible light, and X-rays are all different forms of electromagnetic radiation.

The other two forces are the strong nuclear force and the weak nuclear force. We don’t notice them in everyday life because they are short-range, extending over only tiny distances smaller than an atom. The strong nuclear force binds quarks into protons and neutrons and sticks protons and neutrons together to make atomic nuclei. The weak nuclear force is responsible for—well, nothing much, as far as familiar phenomena are concerned. It is too weak. But if you isolate a single neutron away from any protons, within a few minutes it will decay into other particles; that decay is caused by the weak force.

Four forces control the entire universe? This is a pretty astonishing claim. In fact, putting aside microscopic processes happening inside atoms, everything we see can be accounted for in terms of particles interacting through just gravity and electromagnetism. From the orbits of the planets to the flexing of your muscles, every movement in the macroscopic world arises from the interplay of these two aspects of nature.

At least, that’s the current picture. If that’s not right, all bets are off. How can we be so sure there aren’t other forces that we just haven’t yet been clever enough to find?

The answer is, we can look for them. We know where to look, and indeed we have looked. Other forces are not out there, at least not to any significant extent. Any new force we might someday discover must be so impotent over everyday distances that there’s no way it can affect the macroscopic world. If it could, we would already have found it. And yet a few researchers continue the search, since even an extremely feeble new force would be of enormous theoretical importance.

If you want to invent a new force of nature, you have to specify three things: which particles feel the force, how strong it is, and the range over which it interacts. Once you’ve fixed these properties, you know everything important about your hypothetical force, and you can set about tracking it down. For example, gravity impacts absolutely everything, and its range is infinite. Gravity grows weaker as you move away from a planet or star, but it never fades completely. Gravity is actually a very weak force compared with the others, but because it interacts with everything, it builds up when you have a really massive object. That’s why gravity is the most important force over astronomical distances.

Electromagnetism also has an infinite range, and it is much stronger than gravity. But it acts only on electrically charged particles; neutral particles like neutrons or neutrinos (the names aren’t accidental) are unaffected. What’s more, electrical charges can be positive (like a proton’s) or negative (like an electron’s). Like charges repel each other, while opposite charges attract. Even though electromagnetism is stronger than gravity, it is less important to stars and galaxies because they are made of equal numbers of positive and negative charges, leaving us with a net force of zero. On the extremely small scale, however, the push and pull of electrons and protons is what controls chemical reactions, including every compound and every process in your body.

The nuclear forces are short-range only, so we can ignore them in the macroscopic world. Most physicists expect that there are lots of other undiscovered short-range forces out there; we’re looking for them at particle accelerators. But for everyday-life purposes, what we care about are long-range forces.

Theorists like me have been proposing ideas for new long-range forces, and experimentalists have been looking for them, for quite a while now. Our favorite experimental tool toward that end is a deceptively simple device called a torsion balance: two objects of differing composition at opposite ends of a rod suspended by a wire. Any force that acts differently on the two objects will twist the wire. Torsion balances have a noble history. They were used starting in the 1880s by Hungarian physicist Loránd Eötvös to show that gravity acted equally on objects made of different materials—in other words, that there was no evidence for any new long-range forces.

After Eötvös, many people assumed the question was settled. That changed in 1986 when Ephraim Fischbach of Purdue University reanalyzed the original experiment and claimed there was evidence of a new force lurking in Eötvös’s results. Subsequent investigations did not support the claim, but the excitement got physicists thinking—and more often than not, new thinking leads to new experimental efforts.

The most accurate modern version of Eötvös’s experiment is being performed by Eric Adelberger and his team at the University of Washington in Seattle, who cheekily call themselves the “Eöt-Wash group.” They have perfected a variety of clever, ultrasensitive torsion balance experiments and have spent more than 25 years looking for any twisting that would indicate the presence of new forces operating over long distances.

So far, nothing. If they gave out Nobel Prizes for null results, these guys would be near the top of the list. If there are new forces, then, they are either too weak or too short-range to be relevant to our macroscopic world. Physicists still hope something will show up, perhaps at powerful particle accelerators, because discovering new forces would mean we’d have to develop completely new theories. But if we find them, these hidden forces will leave no imprint on the motions of atoms, molecules, or larger objects such as ourselves.

The bad news is, no tractor beams. If we want to build an apparatus that exerts influence over large distances, we are limited to using gravity and electromagnetism. Even if that’s an established fact, though, it raises as many questions as it answers. Why just those two forces? Why do they interact the way they do? How do they relate to the possibly hidden forces at shorter distances? We can marvel at how well we understand certain aspects of nature, while never forgetting how very far we have left to go.

Sean Carroll is a theoretical physicist at Caltech focusing on inflation and the arrow of time. His blog, Cosmic Variance, appears at http://blogs.discovermagazine.com/cosmicvariance