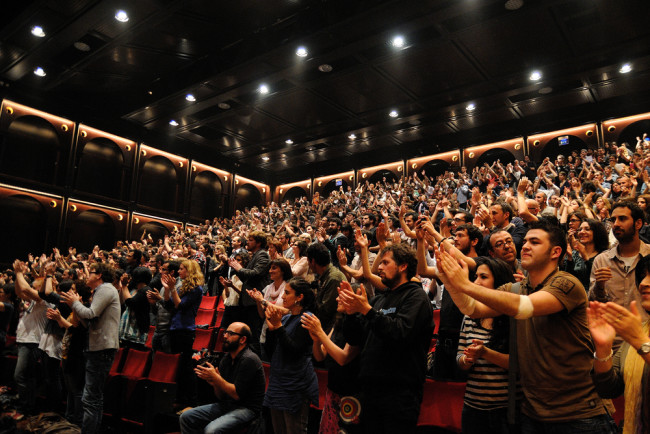 Imagine this nightmare scenario: You’re in a crowd when you begin to notice signs of contagion. First one or two people display signs of infection, and then the number grows until nearly everyone is consumed. Luckily, a few seconds later, a wide recovery begins, just about as intense as the infection, until finally it’s as if nothing happened. It’s a scene from either the most boring zombie movie ever, or a recent study on the dynamics of audience applause. Researchers conducting the study watched videos of students’ applause behavior after academic presentations, and found the applause spread linearly, like a disease. New people begin clapping at a rate proportional to how many are already clapping, and they cease in a socially contagious way as well. The amount of time an individual feels like clapping is a factor, but not nearly as much as peer pressure. Interestingly, the results imply that lengthy applause sessions have less to do with the performance and more to do with the individuals in the audience (something to remind yourself if you’re ever disappointed by too-short applause: it’s not you, it’s them). The results

were published this week in Journal of the Royal Society Interface. This isn’t just useful information to anxious performers and obsessive clap-counters: the study of how behavior spreads through groups is useful for understanding divorce rates, fashions, fads, and, yes, even biological epidemics (hence the language of contagion, infection and recovery, which the authors used in their analysis). Unlike typical diseases, though, “recovery” (i.e., the cessation of applause) spreads linearly as well, with stopped individuals influencing others in the group to stop. Also unusually, this study found that spatial proximity didn’t matter as much, probably since visual cues are less important with such a loud “infection.” If nothing else, the paper does justice to that awkward feeling we've all experienced in small-group applause situations. As the authors write, "The social problem an audience must solve after an academic presentation is not how and when to start a round of applause, but it is rather how to coordinate its end." Image courtesy Christian Bertrand / Shutterstock