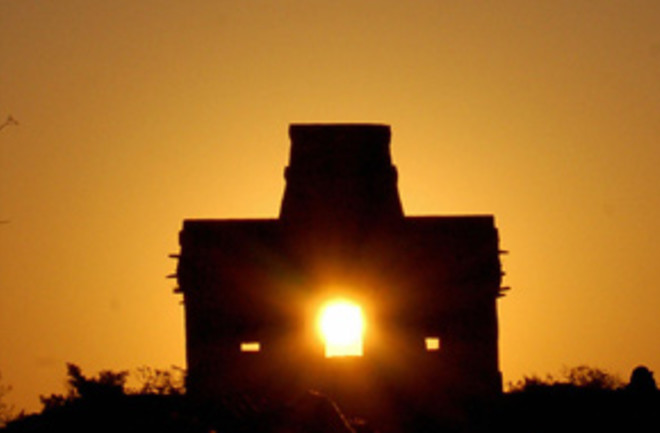 Over the past decade, I've spent many weekends camping in Boone, North Carolina. It's a lovely place with rolling mountains and excellent BBQ. The town itself is features all sorts of unusual shops where you can make your own hemp jewelery, admire blown glass, and there's also a particular bookshop known for mysticism and alternative cures. Once, I even found Cat Artists & Their Work in there. Needless to say, it's an interesting store. It was in that bookshop where I first learned about December 21, 2012. The date marks the end of a 5,126-year cycle on a Mayan calendar and--as the top story on CNN's technology page attests--has sparked a number of doomsday theories:

Dozens of titles about 2012 have been published and more are scheduled to go on sale in the coming months. Current offerings include "Apocalypse 2012," in which author Lawrence Joseph outlines "terrible possibilities," such as the potential for natural disaster. But Joseph admits he doesn't think the world is going to end.. The author acknowledged he's worried his book's title might scare people, but said he wanted to alert the public about possible dangers ahead... "If it had been called 'Serious Threats 2012' or 'Profound Considerations for 2012,' it would have never gotten published," Joseph said.

Fair enough, fear sells. The thing is, nine years ago everyone was saying the same thing. There were theories from why zippers say Y2K to how computers would reset themselves. And don't get me started on everything wrong with Erich von Däniken. Some believers even carried their hysteria on until 2001, explaining the new millennium didn't really begin yet. Then others warned of 2006 after recalculating Jesus' birth. But so far we've persisted. Still, it seems like everyone's waiting for apocalypse these days. I suppose I shouldn't be surprised it's the top spot at CNN over less pressing issues. I've acknowledged before that we humans seem to have a penchant for commemoration, but as for me, I'm not waiting for the world to end. Sure, it very well might given we make such a mess of things regularly and have stockpiled enough nuclear arms to do it ourselves many times over. But worrying gets us nowhere, so instead, I'm waiting for the world to change. And you know, just maybe, it's happening already.