Another stunner from the Juno spacecraft: Jupiter's giant cloud bands and 'String of Pearls' 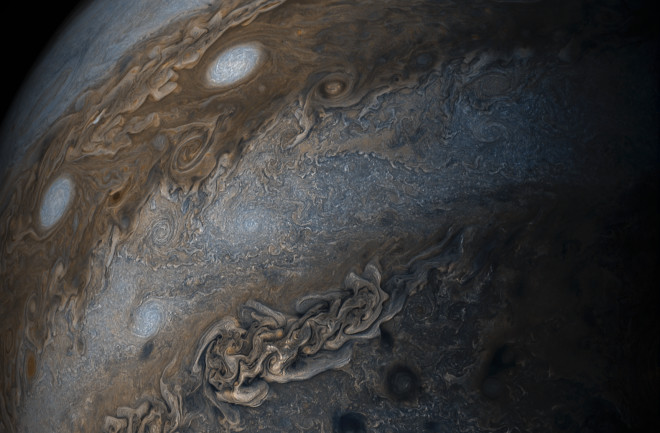 This enhanced-color image of Jupiter was created by citizen scientists Gerald Eichstädt and Seán Doran using data from the JunoCam imager on NASA’s Juno spacecraft. (Source: NASA/JPL-Caltech/SwRI/MSSS/Gerald Eichstädt /Seán Doran) After a bit of an absence for vacation, and to finish work on a feature article on Arctic climate change and geopolitics for bioGraphic magazine, I'm back to blogging here at ImaGeo. And when I spotted this arresting image of Jupiter from the Juno spacecraft, I knew this had to be my first post since returning. Before I get into the details, you might be wondering how images of far away planets fit in a blog dedicated in large measure to the science of our planet. That word, 'planet,' gets at the answer. Here at ImaGeo I frequently feature images and write stories that consider Earth from a planetary perspective — remote sensing images of storms, for example, and articles examining how the global climate is changing and how our activities as humans are contributing. For scientists, understanding our solar system siblings, including Jupiter as well as Mars and all the others, provides insight into the origin and evolution of our own planet. This in turn can help explain why Earth alone came to host an unimaginably diverse array of life forms, including a primate species capable of asking questions about its cosmic origins — and also to fling spacecraft out to other planets in a quest to answer those questions. So that's why I frequently post compelling images of other planets here, including the one above. It was acquired on May 19, 2017 by NASA's Juno spacecraft from an altitude of about 20,800 miles above Jupiter's cloud tops. This is not how Jupiter would appear to our eyes if we were to orbiting the planet aboard Juno. Citizen scientists Gerald Eichstädt and Seán Doran processed the raw image data from the JunoCam imager aboard Juno in a way that makes details in the giant gaseous planet's bands of clouds really pop. As NASA describes things:

Also prominent in the image are white ovals known as the “String of Pearls,” visible near the top. These are counterclockwise-rotating storms. All of us are welcome to try our hands at processing raw JunoCam images. I've done a bit myself, and it can be a blast. Here's an example:

A processed, closeup image of Jupiter's swirling cloud-tops, based on raw data acquired by the Junocam instrument aboard NASA's Juno spacecraft on May 19, 2017. (Source: Raw imagery: NASA / SwRI / MSSS. Processing: Tom Yulsman) My goal wasn't scientific. I wanted to produce something almost painterly — something that an artist may have created. For more information about using raw JunoCam data to create your own images, check out Juno's image processing pages.