Another Hubble stunner… and it’s a repeat. Kinda.

It's been a while since I posted a beautiful Hubble image, so I'm pleased with this one. And even better, it's a new view of one of my favorite objects of all time! 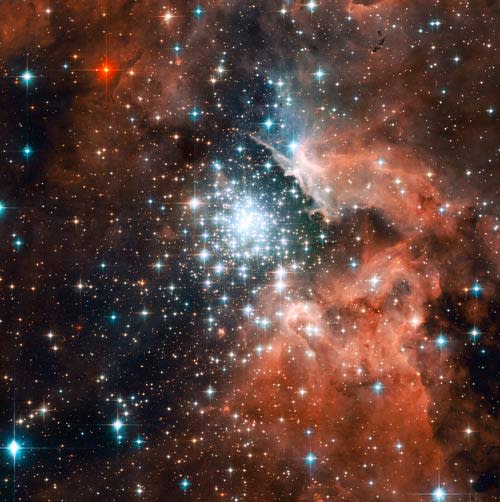 What you are seeing is NGC 3603, a young cluster of stars, and the gas and dust from which they formed still surround the stellar nursery. The brightest stars there are 20 - 40 times the mass of the Sun. These massive bruisers have powerful stellar winds, and they also emit a flood of ultraviolet light. Both of these tend to push back the gaseous curtain enshrouding them, letting us peek in on the newborns. The cluster is pretty dense, as you can see. If you let your eyes scan over the image (and please, grab the higher res versions!) you can see lots of structure that seems to be aligned radially with the center of the cluster. That's real! The flood of light and wind from the stars sculpt the surrounding nebula into those odd shapes. It's a surreal painting, the sky as its canvas, created in slow motion over hundreds of millennia. It's also 20,000 light years away: 120 quadrillion miles. The image is using the "new" camera on board Hubble, the Advanced Camera for Surveys, or ACS. Years ago, Hubble took an image of NGC 3603 with the Wide Field/Planetary Camera 2 (WFPC2). Here's that image: 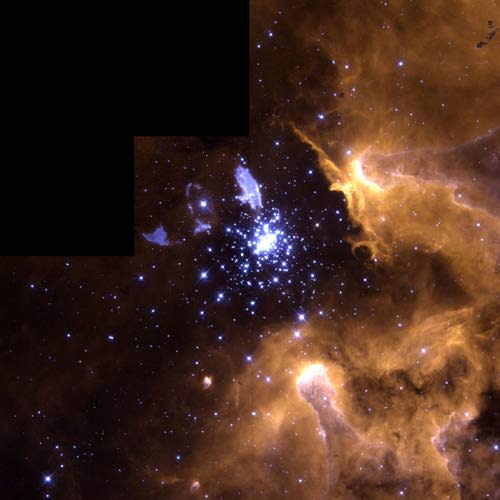 There are quite a few differences. The ACS has a square detector, where the WFPC2 had four chips, with one having a smaller field of view (hence the step ladder or stealth bomber shape). WFPC2 has lower resolution than ACS, so the stars in the center appear more crowded. Different filters were used, and different colors in the post-processing, so the images show different (but similar) features, with different colors. In the WFPC2 image, see that weird ring around the bright star, and the two fuzzy spots to the right and left of it? That star is called Sher 25, and in a few thousand years, it's gonna asplode. This is not a guess; it's a certainty. It's a dead ringer for the star that blew up to form supernova 1987A, which I studied for my PhD. 87A's star also had that ring, and the two caps. They're actually part of a bipolar nebula, an hourglass shaped figure around the star, formed in the last few millennia of the dying star's life. I have more info on all that than you'll need on my Bitesize Astronomy pages (it's a series of several short essays, so kill some time over there). In the new image, the nebulosity around Sher 25 is harder to see. Here are zooms of the two images side-by-side:

Although the ACS is more sensitive, the WFPC2 image shows the gas better because it used filters that select the light the gas emits more strongly. When the WFPC2 image came out, I was floored. It was amazing, and it was the first time I saw an object that looked like supernova 1987A! Then, in January 2007, several more such objects were announced, too. Actually, the ACS image can be useful in studying Sher 25, even though it doesn't show the gas well. By looking at the light not emitted by the gas, we can get a better understanding of the neighborhood of the objects there. You can see more stars in the ACS image, for example, which allows astronomers to take a better census of the stellar population in the cluster. I have no doubt that eventually a paper will come out of this. I'll read it with interest -- I spent a long time studying this kind of object -- but with more than just scientific curiosity. I'm human, too, and sometimes it's nice to catch up with old friends.