Annotated Volcano: A Spectacular View of Tenerife From the ISS 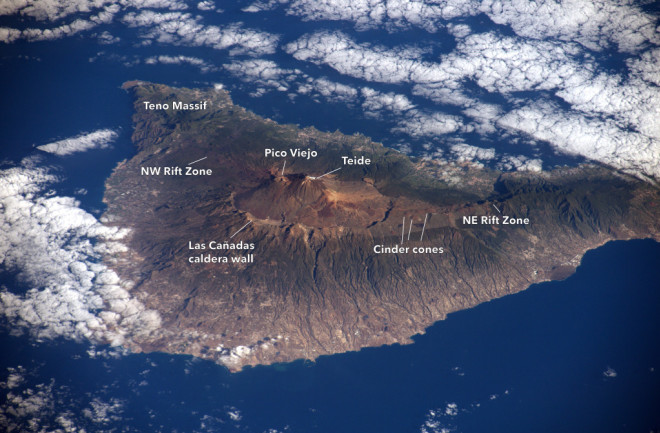 Tenerife in the Canary Islands, seen from the International Space Station on April 27, 2016.Tim Peake/ESA On Wednesday, astronaut Tim Peake (currently on the International Space Station) posted a stunning image of Tenerife, the largest of the Canary Islands. In it, you can clearly see the tallest peak in the Atlantic Ocean (Teide), but also the giant Las Cañadas caldera along with the long volcanic rifts that splay off like arms of the Canary's biggest volcano. The Canary Islands are likely caused by an upwelling of hot mantle material called a hot spot (or mantle plume), creating a chain of volcanoes as the African Plate moves (much like how the Hawaiian Islands are formed). However, there is still debate about whether the inferred plume actually exists. Tenerife is one of the seven large islands in the Canary Islands. It is a complex of volcanic material, with the ancestral volcanoes of the Teno (~5-6 million years old) and Anaga Massif (4-5 million years old) on the northwestern and northeastern corners of the island. (Anaga is not visible in the ISS shot.) The younger volcano straddles the middle of the island, joining the older relict shield volcanoes. The main edifice you can see on the island is the youngest area: Teide, the adjacent Pico Viejo and the NW and NE rift zones. From the floor of the Atlantic Ocean around the island to the top of Teide is a remarkable 7.2 kilometers (~24,000 feet) of relief. The two cones of Teide and Pico Viejo sit inside the Las Cañadas caldera that is 10 by 17 kilometers (bigger than Crater Lake or Kilauea's caldera). We still don't know exactly how the caldera formed, as both a collapse of the land surface in an explosive eruption or landslides could have carved the feature. The two volcanically-active rift zones head off 13 kilometers (8 miles) to the northwest and 10 kilometers (~6.2 miles) to the northeast from the caldera. A third rift that heads south has only experienced seismicity but no known eruptions. Now, although Teide is the highest point on the island it isn't the location of the most recent volcanism on Tenerife. The last eruption on the island was in 1909 and it came from a cinder cone (Chinyero) on the NW rift, which has historically been the most active area on the volcano. That eruption lasted 10 days and was a rift eruption that coalesced into a single cone---similar to what we saw during the Kamoamoa eruption of Kilauea. In 1798, a small eruption occurred on the flanks of Pico Viejo, but you need to go back to ~800 AD (plus or minus 150 years) to find evidence of an eruption from Teide itself. The 1706 eruption of Montaña Negra from the NW rift destroyed the town of El Tanque and its harbor in less than 15 hours when lava flows overran the region. A week later, more lava flows did in two more towns. About 2,000 years ago, Tenerife unleashed a surprising large explosive eruption for this kind of shield volcano. Volcanoes like Tenerife and Kilauea are hot spot volcanoes that tend to have eruptions that produce lava flows, but in ~80 AD, Pico Viejo produced an explosive eruption that released ~0.3 cubic kilometers of pumice and ash, along with some small domes, totally a VEI 4 eruption. This change in eruption style came from a change in the magma, from basanite (low silica, runnier) to phonolite (higher silica, stickier). Now, Tenerife hasn't produced another eruption like this since, but a paper by Ablay and others (1995) suggested that there could be more of the explosive phonolite magma lurking underneath the caldera. The biggest threat to the ~900,000 people on Tenerife today doesn't come from a potential explosive eruption but rather the lava flows and cinder cones that could erupt on the NW rift zone. These eruptions could spread some ash across the island and start fires on the slopes of Tenerife. It even seems that activity from Teide has been on the decline over the last 30,000 years, so another eruption from the peak might be increasingly unlikely. Occasionally a small earthquake swarm will occur under Tenerife (including a notable one in 2004). These swarms are likely business-as-usual at Tenerife, with magma rising from ~7-10 kilometers under the island. However, right now, things seem quiet under the island. The Canary Islands were home to an impressive eruption of El Hierro in 2011-12.