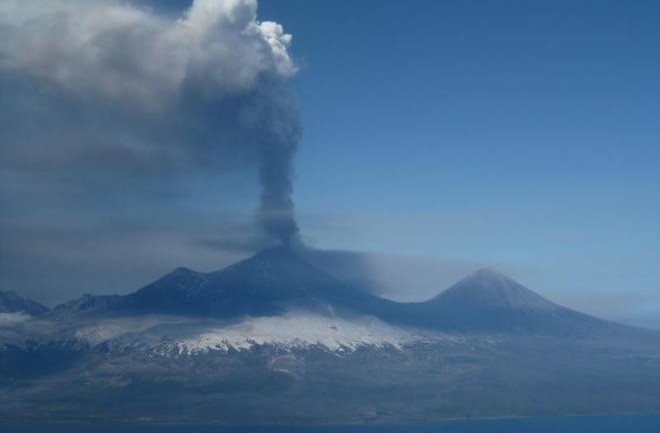 Alaska's Pavlof erupting on June 3, 2014. Photo by Paul Horn / AVO-USGS 2014 is in the past, but before we dive headlong into 2015, it is time to unveil the 2014 Pliny for Volcanic Event of the Year. I received well over 100 votes for the competition and have compiled the results ... so now for the countdown. Here's the past winners of the Pliny: 2009: Sarychev Peak2010: Eyjafjallajökull2011: Puyehue-Cordón Caulle2012: Tolbachik2013: Etna Just as a refresher on the voting: the ranking is weighted, where a first place vote got 10 points, second place got 5 points and 3rd place (or lower) got 1 point. Honorable Mention (all the volcanoes that received votes): Kawah Ijen, Mayon, Pavlof (see above), Popocatépetl, Sangeang Api, Shiveluch, Tavurvur, Tungurahua#10: Turrialba, Costa Rica (11 points)

The steaming crater of Costa Rica's Turrialba, seen on November 4, 2014. Photo by OVSICORI-UNA Over the past few years, Turrialba has been Costa Rica's most restless volcano. This restlessness culminated this year in Turrialba's largest explosive eruption since 1866 that produced a plume that reached over 6 km (20,000 feet). When the weather permits, you can watch the activity at Turrialba on the OVSICORI webcam. #9: Etna, Italy (21 points)

Lava flows and lava fountains from Etna, seen on August 5, 2014. Photo by Andrea Valenti and Silvo Conticello, used by permission. You have to give it to Etna. It can have a very quiet year by its standards and still make it to the top 10 for the Pliny. Unlike the volcano's chart-topping performance in 2013, Etna only produced a few notable eruptions, including the recent paroxysm and ash plume and the summer's lava flows (see above). #8: Stromboli, Italy (29 points)

The glowing lava flows from Italy's Stromboli, seen during October 2014. Photo by unukorno / Flickr. Usually overshadowed by its Sicilian neighbor, Stromboli snuck ahead of Etna in this year's Pliny voting. This is thanks to not only a busy year of eruptions but also the fact that it showed off its activity to tourists who watched lava flows enter the sea. #7 Nishinoshima, Japan (33 points)

Thermal (IR) image from September 27, 2014 showing the active lava flow field on the growing island on Nishino-shima. Image from Japan Coast Guard. Last year's runner-up volcano still came in this year at a strong #7, but in a sense, 2014 was even more impressive for Japan's Nishinoshima. The island has grown to be ten times larger than it was at this time last year thanks to almost constant lava flows that have spread like tentacles out from the main vent. This thermal image taken in September shows the lava flow fan that was active at the time, adding more area to the fastest growing island in the Pacific. #6 Kilauea, United States (34 points)

The Kilauea lava flows heading toward Pahoa Marketplace, seen on December 30, 2014. Photo by HVO-USGS. Much of the news about Kilauea this year was about a single lava flow that got ambitious when it found a tube system to exploit to get a long way down the eastern rift of the Hawaiian volcano. This lava flow moved over 16 km from its Pu'u O'o vent source and returned to the surface near Pahoa. The lava flows almost cut the town in half and did destroy some structures before stagnating (with or without the help of creative locals). However, it wasn't done when a new breakout upslope headed towards the Pahoa Marketplace, which has been spared so far. #5 Kelut, Indonesia (55 points)

Ash fall on a town near Kelut in Indonesia after the February 14, 2014 eruption. Image by Aldnonymous / Wikimedia Commons. It was a brief eruption, but an impressive one from Indonesia's Kelut. The February 14th eruption caused over 100,000 people to leave their homes and blanketed the region with ash for over 100 km in all directions. By March, the volcano has settled down and the alert status was lowered to Level 2 (of 4) and by August, Kelut was back to Level 1 status. #4 Ontake, Japan (94 points)

The growing ash cloud from the September 27, 2014 eruption of Ontake in Japan. Photo by Masanori Genko/AP The largest volcanic tragedy came from a surprise eruption from Japan's Ontake. The volcano had been quiet for years and showed little in the way of precursory signs of an eruption, but on September 27, a relatively small mostly steam-driven explosion occurred on the popular hiking destination, killing at least 47 people who were at or near the summit of the volcano. Some dramatic video was taken by hikers trying to outrun or hide from the pyroclastic flows that were produced by the eruption (which seemed to be relatively cool, supporting idea it was a steam-driven explosion, not magma-driven). Most chilling, many of the hikers who perished were found with pictures of the eruption that ended up killing them. Intake's eruption was a stark reminder of the danger of active volcanoes that can lull us into a sense of security when they seem quiet. #3 Sinabung, Indonesia (197 points)

Village damaged by ash fall and pyroclastic flows from Sinabung, seen on January 27, 2014. Photo by Rendy Cipta Muliawan / Flickr. If Ontake's eruption was a sudden and singular event, Sinabung's 2014 was a continuous humanitarian crisis. For the entire year, the Indonesian volcano produced pyroclastic flow after pyroclastic flow as viscous lava oozed from its active vent to form a dome that collapsed as it became too steep. Even though much of the area around Sinabung has been declared off limits, people still died when they ventured too close to the volcano during one of its many pyroclastic flows. Over 30,000 people are still displaced due to Sinabung's constant activity. #2 Fogo, Cape Verde Islands (290 points)

Lava flows from Fogo crawling through the remains of towns on the small island in the Cape Verde Islands. Photo by INVOLCAN, used by permission. Another humanitarian crisis is continuing to unfold at Fogo in the Cape Verde Islands. The island volcano erupted for the first time in almost 20 years and the continuous lava flows being produced have inundated at least two towns located within Fogo's volcano. Thousands of people have lost their homes and more may have to leave as the eruption continues. Unlike the Pahoa lava flow at Kilauea, the eruption at Fogo hasn't splashed across the headlines of mainstream media, but even as the new year opens, the eruption is still going strong. #1 Holuhraun-Barðarbunga, Iceland (750 points)

Multiple vents and lava flows during the eruption of Holuhraun in Iceland, seen on September 4, 2014. Photo by Peter Hartree / Flickr. However, when it came to capturing the world's attention, it is hard to stop a new eruption in Iceland. It should be hardly a surprise that the eruption that kept the world on its toes for weeks during the summer ended up on top of the Pliny pile. An intense earthquake swarm hit the area under the Vatnajökull ice cap during August 2014 and seem to be progressing northward and shallower, leading most volcanologists monitoring the situation to think a new dike of basaltic magma was intruding - the real question was if, when and where an eruption might occur. A subglacial eruption at Barðarbunga might have been a large glacial flood produced by melting ice while an eruption from Askja could have been highly explosive if the dike continued to propagate to the north. Instead, the best case scenario (at least from a hazards' perspective) unfolded where a new fissures opened between Vatnajökull and Askja, so what we've seen are some of the largest and most impressive lava flows in Iceland for centuries. We've also seen intense subsidence of the Barðarbunga caldera floor, dropping tens of meters over the course of the eruption (but little evidence of any eruption under the ice in the caldera).

Pliny the Younger. Photo by Wolfgang Sauber, Wikimedia Commons. The Holuhraun eruption is the largest basaltic lava flow eruption in Iceland since the enormous Laki fissures in 1783, averaging so far ~0.33 cubic kilometer of basaltic lava per month (thanks to Dr. Anja Schmidt for that calculation). As a comparison, Kilauea, produces only about 0.01 cubic kilometer of lava per month. By the end of 2014, the lava flows had covered almost 83 square kilometers of Icelandic landscape - almost the same area as the island of Manhattan! The Holuhraun eruption has expelled the most sulfur dioxide of any eruption in centuries, matching the entire output of industrial Europe in all of 2010 in less than 150 days (again, thanks to Dr. Anja Schmidt for that comparison). Earthquakes and eruption are continuing at Holuhraun, although the large earthquakes in the Barðarbunga caldera (> M4.5) have slowed of late. Luckily, beyond some highly unpleasant air in Iceland, the eruption at Holuhraun has almost entirely been a benign eruption that produced some spectacular views (see above) - a worthy winner of the 2014 Pliny for Volcanic Event of the Year.