... and if you look out the right side window you'll see a rocket launch...

I fly a lot, and I've seen some strange stuff out the window. But I am totally jealous of a user on reddit who goes by the handle time, because he was flying recently and the flight attendant told him to look out the window. And when he did, he saw this: 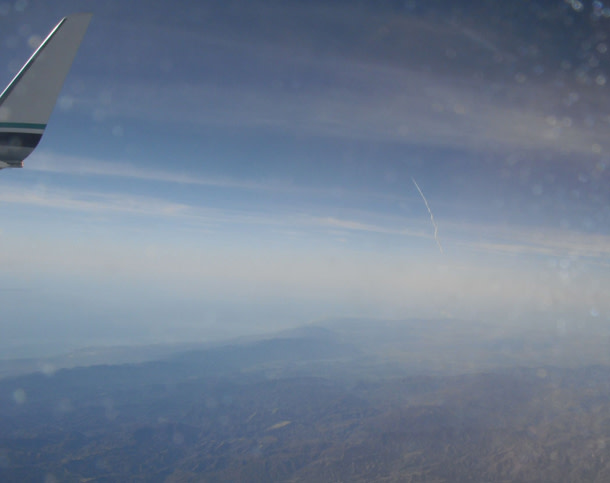 See that vertical white plume in the background? That's the vapor trail from Thursday's launch of a monster Delta IV rocket from Vandenberg Air Force Base in southern California. It was carrying a satellite for the National Reconnaissance Office -- that is, a spy sat. How cool would it be to see something like that out your window? He took a series of pictures of the launch, all showing the twisting trail as the rocket took the satellite to orbit. I've seen three rocket launches up close in my life: one was an Delta that happened to go up while I was in Florida, another was the Space Shuttle carrying a camera I worked on up to Hubble, and the very first one I ever saw -- get this -- was a Saturn V carrying David Scott, James Irwin, and Al Worden to the Moon for Apollo 15. I was a little kid, but it left quite an impression on me. Watching a rocket launch is a visceral thrill, and if you ever get the chance, take it. It's an amazing experience.