Ancient Tombs May Have Doubled As Telescopes 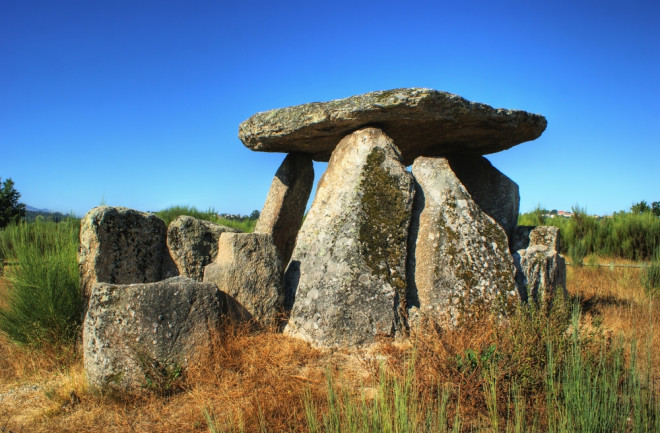 Ancient graves like Dolmen Pedra da Orca in Gouveia, Portugal may have also enhanced the view of stars. (Credit: Vector99/Shutterstock) Ancient astronomers may have used tombs to probe the heavens. New research suggests that prehistoric humans may have relied on long dark chambers in igloo-shaped structures known as 'passage graves' to see the rising stars. The extended narrow entrances of the graves, which are scattered across Europe, may have amplified a viewer's night vision, allowing them to detect stars rising at twilight sooner than they would otherwise be able to. "By using these passage graves, the observer would have sat in complete darkness, with only the opening to the passage grave in front of them showing the part of the sky where the star rises," Kieran Simcox, an undergraduate student at Nottingham Trent University in England, told Discover by email. Led by Daniel Brown, also of Nottingham Trent, and Fabio Silva, of the University of Wales Trinity Saint David, Simcox studied passage graves' potential as astronomical instruments. He presented the results Thursday at the National Astronomy Meeting in England.

A view of several ancient passage graves.a) Dolmen da Orca in Western Iberia, b) the window of visibility from within the the chamber, c) Orca de Santo Tisco in Portugal. (Credit: F. Silva) "By reducing the background area and focusing on just a small part of the sky, an observer will be able to see a star earlier than had they been outside," Simcox said. Revealing Secrets Ancient cultures across Europe placed their dead within passage graves. The early tombs consisted of single or multiple chambers with a corridor leading to an entrance, and the entire structure was covered with mounds of earth or stone. Some of the tombs feature paintings or engravings tied to their original use. According to Silva and Brown, most passageways date back to the Neolithic period, between 6,000 and 2,000 B.C., though some show continued use during the Bronze Age. Famous examples include Ireland's Newgrange and Scotland's Maeshowe. "They were clearly a widespread phenomena spanning the entire Atlantic coast," Silva and Brown said by email. Tombs can be found in Spain and Scandinavia, as well as within the United Kingdom. "Different regions had their own traditions and architectural styles, but they are all variations on a theme."

In most tombs, the inner chambers housed the deceased, while outer courts could have been used for more communal practices, possibly related to funeral rites. According to Silva and Brown, however, scholars have begun to question whether funeral rites were the sole purpose of the outer regions. "These passage graves exhibit elements suggesting that initiation rituals, also known as rites of passage, might have been conducted within the megalithic chamber," they said. Combining this information with a 2013 survey suggesting that many ancient societies taught their initiates esoteric 'secrets' related to astronomy observations, the pair decided to investigate the alignments of several passage graves. They identified a tomb in Portugal with a chamber pointing to the sky where Aldebaran rises over the Serra da Estrela mountain range, translated as 'mountain range of the star.' Aldebaran, which sits in the eye of the bull constellation Taurus, is one of the brighter stars in the northern hemisphere. According to the scientists, around the time the passage grave was built, the star would rise in late April and early May.

A view of the Serra da Estrela mountain range with Aldebaran rising. (Credit: F. Silva) "The first seeing of this star would have indicated to the civilization that it was time to move to the mountains, as these civilizations spent the winters on low ground near the river and the summers on higher grounds in the mountain area," Simcox said.

According to Simcox, while literature suggests that faint stars can be more easily identified in dark chambers such as passage graves, no one has studied the effect. The team plans to measure how much long passageways can help viewers to spot faint stars, determining whether or not the Portugal tomb played a role in revealing the rise of Aldebaran. "The key idea we are exploring is whether this 'secret' might have been communicated or revealed by the visibility of the star at dawn to someone inside the chamber days, if not a full week, ahead of the rest of the community," Brown and Silva said.